It’s All about Charlie

by Kathleen A. Duffy 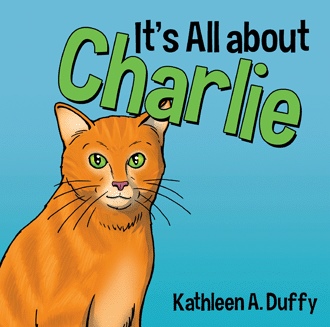 IT’S ALL ABOUT CHARLIE

Charlie the cat was alone. He was always alone. Not lonely...he was just alone. “I like it better this way,” he said. “I can eat when I want, sleep when I want, play when I want, go where I want. Me, myself and I are my three best friends,” Charlie always said that, only to himself, of course. The other cats and dogs stayed away from Charlie. It’s not that they didn’t like him. They just didn‘t feel they could get close to him. Some thought he was grouchy or grumpy. Some thought he felt that he was better than anyone else. Some thought that he just couldn’t be bothered with other animals. Oh, the animals talked a lot about Charlie. But whatever they thought, about anything, they never shared their thoughts with Charlie. And he liked it that way. “Doesn’t bother me,” he would say, only to himself, of course.

One day Charlie was very hungry. He was creeping through the tall grass stalking his fat, juicy dinner, when he heard a rustling in the grass near his right leg. The rustling grew louder and closer. “How annoying.” He thought, momentarily turning his head in the direction of the noise. His ‘dinner’ took advantage of the distraction and scampered off. The noise continued. “That does it,” thought Charlie. He turned angrily & stomped through the grass to where the noise was coming from. “HEY! Who’s making all that noise? You just scared off my dinner!” he roared. He pushed aside the long grass to see the noise-maker. He stopped breathing for a second. There, right before his eyes was the tiniest, blackest kitten Charlie had ever seen. A helpless, teeny, tiny, new-born kitten. “Meew, meew,” squeaked the kitty. “What are you doing here in MY grass? Go away! I’m trying to get some dinner! Shoo! Where’s your mother?” scolded Charlie. The kitten just wiggled around a bit and said “Meew, meew”, again. “Oh, for Pete’s sake,” thought Charlie. He never did have any patience with tiny kittens. Why, they couldn’t even see when they were first born! That was all Charlie knew about baby kittens. “Stop that crying! You’re making so much racket one of the dogs will surely find us,” he scolded. “Where’s your mother? Where’s your mother?! I certainly hope you have a mother! PULEEEEZE have a mother!” The baby kitty wiggled around on the grass and continued to mew loudly! Charlie was rapidly losing patience. “SHHHHHHH, you’re going to get the dog after us with all this noise...shhhhhhh!” I suppose I should just go and leave it here. It’s none of my business what happens, Charlie thought to himself. Suddenly, he heard a dog barking in the distance and it was coming closer. “RATS !” cried Charlie. “That dog is coming this way! Well, don’t just lay there! Get up and get going! What’s your problem?! Get up! The dog’s coming! HURRY !”

Charlie is a loner, and he likes it that way. He grew up as an only cat and has developed very set ideas about how his world should be and how others should behave in it. But when circumstances force him to rescue a newborn kitten, his orderly world crumbles around him. Charlie is now a single parent, with all the emotional ups and downs that parenthood can bring.

In this new situation, Charlie finds strengths within himself that he never dreamed he had. The old life he lived disappears, and a new one unfolds—one that is bigger, fuller, and better. Charlie experiences the joys of a life of giving and receiving unconditional love.

“Wonderfully enchanting to watch Charlie have a change of heart and personality to become a hero to a little kitten. Charlie’s transformation warms the heart!” – K. Finneron, author of SuSu of the FruFru

“This absolutely charming and heart-warming children’s story about Charlie the Cat and how he redeems his selfish ways will resonate with children and adults alike. Like all great stories, it’s easy to read, full of laugh-out-loud bits, and is hard to forget”. – Jane Buckle, PhD, London, UK

Kathleen A. Duffy is a nurse, wife, mother of three, and grandmother to four boys. The “Charlie” books are based on her relationship and adventures with her dear friend of more than twenty-seven years … the real-life, human Charlie.