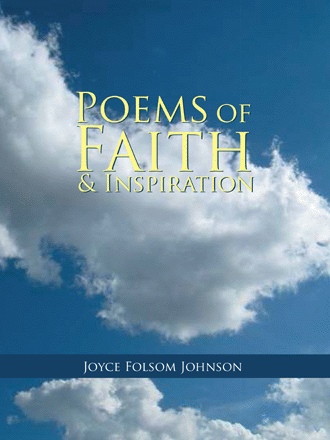 Frogs, family and lots of fun combine to make this book of poetry a must-read by everyone who loves the funny and teachable moments we all run into. There are poems of inspiration, musings about life in general, instruction on kindness and treating others with love, understanding and respect. Never one to take credit for her own work, Joyce Folsom Johnson has written hundreds of poems over the years. Lots of them are written in tandem with our loving God who inspires her to keep getting up in the middle of the night to jot down the ideas (or full poems) He has suggested to her. These poems started out as gifts to friends and family on special occasions and to recall fun times of bygone days. Spending some time in this world brings back memories of joy and sorrow, and reminds us all to live out Jesus’ love. Marcia Lee Johnson Newell “You take words and weave them into beautiful poetry which touch people deeply. I have admired you, and I think you are wise beyond your years.” Wilma Rollins, Former School Teacher, written in 1989 “Divinely inspired, encouraging, thought-provoking and at times, funny. Ever showing God’s great love for us, this book is a keeper! One to refer to for many of life’s situations.” Christine Ann Johnson Morrison

In Shapleigh, Maine, during the Autumn of 1939, Joyce Elizabeth Folsom Johnson was born in the same farmhouse her mother had been born in, as had generations before them. Her family had a strong literary heritage with Donald Parker Folsom as her father and her mother, Beulah Olive Pillsbury Folsom. She was a treasured child amongst an extended family of adults. Joyce grew up, married her husband, Ernest, and together they raised a family in Massachusetts. Many of her poems are drawn from that family life. She started writing later in life after the hubbub of raising children had subsided some. Joyce describes her first poem, “Sidewalk Smile,” below. “This was the first poem that ever came to me when I was sleeping soundly. I awoke and the poem was still whirling around in my mind. I was exhausted, but intrigued and amused, so I dragged myself out of bed, went downstairs still half asleep and bleary-eyed, fumbled around for a paper and pencil, and wrote it down because I knew I would never remember it in the morning.. .. I had no way of knowing that this was the beginning of many more such instances when my sleep would be interrupted by this “nudging” from the Lord to get up and write.” Joyce later adds, “If your life has been blessed by only one of these poems, then my work and the help of my family, shall not have been in vain.” “Joyce Folsom Johnson, daughter of Donald and Beulah Pillsbury Folsom, is a graduate of Sanford High School and Nasson College in Springvale, Maine. She served as private Medical Secretary for Dr. Ralph Belmont, Sanford, ME., and Dr. Graves at the University of Maine, Orono, Maine. She is the mother of three, Marcia, Dean, and Christine, and the grandmother of nine. “Joyce experienced enough of practical life, along with its “ups and downs”, to become well-qualified to impart her faith and wisdom through speech, prose, and poetry. For over half a century, she has inspired others, as much through her daily lifestyle, as by her poems.” Ernest M, Johnson, Engineering Physicist-Retired