With God, All Things Are Possible 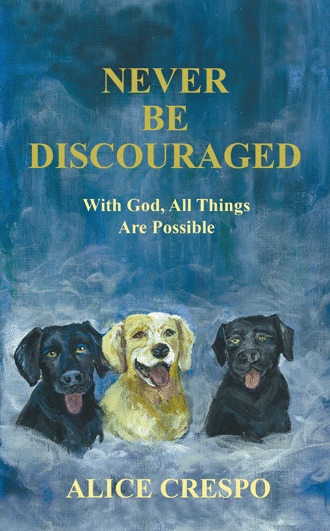 No one says that being blind is easy. Growing up, no one in my household really said anything about being blind at all. Uncomfortable things like that were not really discussed or explained much. But I was, and am, totally blind, and there is definitely a lot of things to be discussed and explained.

I always knew that I was blind- I couldn't see, so of course I was blind. But it is not just about knowing that you are blind- it’s about understanding that even though it is a sighted world, there is still so much to explore and experience. Just because you can’t see something, does not mean that it isn't there. You can’t hide away just because you are afraid; have faith, get up, and create your own light. It is difficult sometimes- I know, I've suffered as well- but it isn't impossible. Nothing is impossible.

As a child I did not fully grasp the concept of being blind. No one ever really sat me down and explained why the other children weren't as excited to play with me as they were with my sisters. I didn't understand that they were playing games that I couldn't play. I didn't understand why teachers were so hard on me when I made mistakes- I was only a child! And didn't everyone make mistakes? Why was I treated so differently? Why was I so different?

I was different because I was blind.

People will always ask me what it’s like to be blind. How do I even answer that? What is it like to not be blind? If I feel like they are actually being honest with me, I’ll tell whoever is asking to just close their eyes as tight as they can. When I ask them to tell me what’s happening around them, they can’t answer because they can’t see. Well, everyone, that’s what it’s like for me. I cannot see. I cannot see anything, not even a little bit.

There are ways to learn how to “see colors,” I've been told, by using descriptive words. However, color is a visual sense that words can only describe so much. For example, I've been told that red is like heat, which does give me an idea. But I've also been told that red is a very pretty color, and I really can’t see how something that’s really hot, and could burn me be pretty. White is pure and clean and is supposed to make me think of snow… Or, rather, snow will make me think of the color white. However, I can’t really say that I think snow is clean and pure because snow makes me think of slush and cold and uncomfortable, itchy sweaters. Also, how am I supposed to think that snow is pretty when I live in New York, and snow in New York, especially Times Square, is definitely not pretty? Besides, whenever it snows, it makes it difficult to walk because it covers all of the landmarks. And the idea of rolling a cane in the snow is just no fun, let’s be honest. And then, if I fall in the snow, which happens more than I’d like to admit, that’s even worse. And when I’m using a guide dog, snow is a triple nuisance because of the salt that is used. The salt gets into the dogs paws and makes a very big mess in the house. And if I fall with my guide dog, people are afraid of being bitten and won’t help me up. So, sorry, there is nothing pretty about snow. Then of course, there is the color Black. People tell me black is supposed to be like night. People also tell me that black is symbolic of depression and death and other unfortunate things. However, I like thinking that black is like night, in which case black is definitely my favorite color because I like night and I like to sleep. So, yes, I suppose black is definitely my favorite color. Besides, night means the day is over and work is over and it is time to relax, watch TV, read a book, listen to music, and eat a snack…. I can go on and on with all of the good stuff that happens at night. Not to mention, when I wear black, I know that I don’t need to worry about matching anything.

Let’s see… There are many other things that are hard to describe… Like the moon. However, one thing can always be described one way or another. So no need to further this conversation and waste space.

People have told me that food looks even more appetizing than it is. However, I love food. I may not be able to see it, but it certainly tastes good. My favorite thing is eating, which is why I’ll never go on a diet. Those evil things will only make you feel guilty about enjoying the pure happiness of a good meal.

For example, a good filet mignon with a loaded baked potato from Outback Steakhouse will never fail to put a satisfied smile on my face. Not only is the food absolutely delectable, but Outback has always been a place that has gone above and beyond to make my experience something to remember. They provide Braille menus, and if I ever come with a friend who uses a walker, they put us close by the door so that my friend does not have to walk so far. I wish more places were as accommodating as Outback is. And, by the way, don’t even get me started on their desserts… They are awesome. Enough said.

As you read this book, you will be taken into a new world where people function without sight. But the worst thing that can happen to someone is not that they lose their sight, but that they lose their vision. I hope that by reading this book, you will open your mind to the many possibilities that could be yours if you will just give your dreams a chance and trust that God will always be there to help you.

Through this book, I hope to encourage you to never give up on your dreams. Remember, you have the best helper of all—the Lord. And He will send good people into your life to help you along the journey. I grew up with nothing, but through God’s love and mercy and my own hard work, I broke the poverty cycle. I know that you can do the same, no matter what the struggle is. God is on our side; He wants us to win.

Alice Crespo was born in New York City, raised in Brooklyn, and grew up totally blind. She had to learn many things, and she realized that, with God’s help, there was nothing that she couldn’t do. The sky was the limit. Alice is now sixty years of age, and she wants to share her experiences and her life lessons with you. Here is her story.