AVAROM AND THE SECRET OF THE WHITE MIST 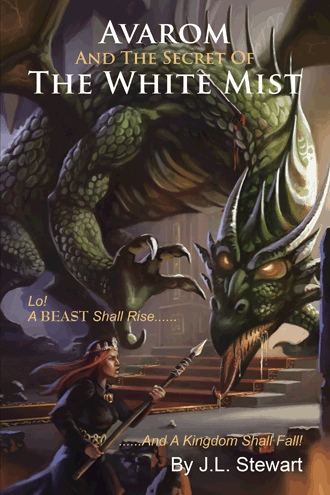 Then Avarom saw it! From out of the dark hole it came, a black oval body no bigger than a camel. Its movements made by eight long hairy stilts as it unfolded itself upon its homemade dinner table of webbing. Frantically, Avarom tried to free himself. His attempts at snapping the strands becoming more frenzied especially when the spider placed the soldier beneath it to continue feeding, its eight monstrous legs securing its squirming prey. The soldier's screams were a deafening plea for mercy as the spider continued to wrap him up in more webbing, until it finally silenced him forever by severing his head!

Though Servitica's monumental battle against the nefarious Yarum ended less than a year ago, it almost pales in comparison to the recent ill temperament of Queen Nakir. Yet, her majesty's mannerisms of late toward Avarom and her subjects must be set aside as an astonishing piece of news comes to light! The White Mist, which has loomed atop the Caye Mountains for centuries, has vanished! And all know the legend that when falls the mist so rises the Mighty Beast of Caye! A gigantic fire-breathing serpent of immeasurable power and ferocity controlled only by the one sorcerer who created it - Tiamuzin! And when this beast of legend reveals itself by murderously attacking the Red Queen's Castle, Avarom furiously races head on to track it down. The hunt is on as Avarom, filled with deadly determination, charges into the unknown to face the likes of Striya, the guardian of the underworld, Murok, the invincible man-monster, Queen Shenkar and her arena of death! All this and much more await the Queen's Champion in this non-stop action adventure as he uses his undaunted fighting skills to face off against the ancient enemies of the Great Lands; but will it be enough as Avarom seeks to discover the Secret of The White Mist!