Snookie and Bernie Are Sweethearts

An Anatomy of a Marriage 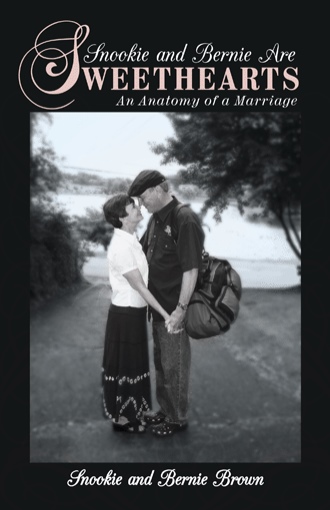 Introduction
There was a country song written in the early 1900s that became popular once again when we were growing up. The first line was “Frankie and Johnny were sweethearts.” It was a sad story, as country songs often are, about a couple who began their relationship with a commitment “to be true to each other, true as the stars above.” Johnny was Frankie’s man, and “he wouldn’t do her wrong.” Well, you guessed it. He eventually did do her wrong, and she responded by doing him in! The last verse begins with “Now this story ain’t got no moral, this story ain’t got no end.”
In contrast, Snookie and Bernie Are Sweethearts is a story about a couple in love who began life together with just such a commitment and are still true to each other more than fifty years later. Despite some challenges, stresses, and individual frailties, ours is a successful, fulfilling, exciting, and fun relationship. We believe without a doubt that there is a moral to our story, one that is contained in the wonderful state of matrimony long ago instituted by the God who created us.
We share these pages mainly for the benefit of our family—our children, grandchildren, and those yet to come—but are delighted if others have an interest in and can benefit from its offerings. When you reach your mature years, your memory can become foggy, and your recollections may get a bit distorted or even exaggerated (the latter is Bernie’s forte). However, this is our best attempt to tell it like it is as we offer to you our testimony of love and commitment to each other. It may not be the racy type of love story sold in the romance section of your local bookstore, but it is heartfelt and pure.
Though this is our story, we will at times contribute separately, and in an attempt to give structure to the process, we will follow the pattern set in Bernie’s recent book, Purpose in the Fourth Quarter, perhaps making this a type of sequel. In that book, his premise is that the game of life can be divided into four quarters with a break in the middle, similar to the game of football. Our life as a couple seems to fit comfortably within this template.
We feel the need to point out that we grew up in a time when marriage, family, and faith were three of the most sacred and important aspects of life as we knew it. Our parents who raised us were happily married and instilled principles of unconditional love and commitment within us. We realize that in parts of society today much has changed. The statistics of the number of children born out of wedlock are staggering, and many are not brought up by their own parents. Some are in poverty-stricken or abusive situations without good role models. These and other factors have resulted in many kids searching for the love of a family unit in all the wrong places. Therefore, we acknowledge that the challenges and obstacles are much greater today.
After reading our recollections, some might say, “That was just a fairy tale,” or, “It was boring with not enough excitement and drama,” and even, “They lived in another time.” To all of these and any other reactions, we simply respond, “This is our story. It isn’t boring to us but is rather an ongoing adventure, and in our minds, the principles of love and commitment never change.”
Many of you also have interesting and insightful stories to tell, and we encourage you to do so! The exercise of putting our thoughts and memories down in writing has in itself been a time of reflection and has brought an even deeper commitment to and appreciation for one another. Most of all, it is our hope and prayer that this modest effort on our part will mean something to others seeking a Christ-centered relationship, and that it will honor Him, the One who created us and brought us together.

Chapter 9
Reflections and Conclusions
We both have read this manuscript numerous times to catch any errors and to make it more readable and understandable. Just as we prepared to submit it for editing, it hit us that maybe our story is somewhat of a fairy tale or as a good friend remarked, “You two have lived a charmed life.” We would disagree with the latter since we have faced some significant challenges and obstacles (deaths, illnesses, relational and job issues, etc.). However, we have had a wonderful, fun-filled, satisfying life together, and it is true that we have been blessed beyond measure. Are we normal and typical or is our story an exception in today’s world? We honestly don’t know. But we have learned a few things in our fifty years together that we feel are worth passing along and thus bear repeating.
First, we believe that our story, as well as that of other couples, comfortably fits into the “four quarter game” template that we chose to use. This has made it much easier for us to review and analyze our marriage and its progression. Our collaborative effort to record our story has been an unbelievable experience that has afforded us the opportunity to look back, reminisce, marvel, understand, and appreciate each other more than ever. We have laughed and cried, we have remembered things that should never be forgotten, and we have regained some of the lost twinkle as we look into each other’s eyes. We have fallen in love all over again. We recommend that all married couples go through a similar exercise (be sure to exclude certain experiences that might be hurtful and painful that have no redeeming qualities). Using the “four quarter” template, relive and record your story for yourselves, your children, and others. You, too, will be blessed!
Second, we believe that even though marriage is a serious and solemn covenant, it also should be full of joy, fun, and excitement. It should not be burdensome to share your lives together. Instead, this relationship should be a constantly growing process of appreciating each other and truly becoming one. In addition to the joy of physical intimacy, it should foster emotional and spiritual closeness. Sharing the good and bad of each other’s day, taking a walk-and-talk time, watching television together, having a date night without children, working together on a redecorating project, or making plans for the next day are just a few of the little things that promotes heartfelt oneness. In addition to loving your spouse, you should also like him or her. Enjoy each other!
Third, marriage is all about family. In our case, as the two of us became one and started our family, we also, in a true sense, joined our two original ones together. In an instant, we each had an additional mother and father and brothers and sisters (in-laws). Some of these new relationships have been closer than others, but they all have resulted in an expansion of family. Then, when our children came along, our family of two ultimately became five (and later even larger with their spouses and children). All this means that there are more folks to love. Thankfully, when our children and grandchildren arrived, we discovered that we did not need to divide the same amount of love among more; instead, God has given us unlimited capacity in this regard. Our love for each other has actually grown along with our family.
And, finally, we believe that there is a God who has a plan for us individually and collectively, and that His plan is better than any we might independently develop on our own. It includes instructions for our relationship as husband and wife that, if followed, will result in a blessed marriage. We have a choice to totally or partially accept or reject God’s plan for us. Unfortunately, we often knowingly or unknowingly reject it, resulting in something less than what God has in mind for us.

A last-minute date led to a life-changing commitment for two college students. Snookie and Bernie share the journey of their life together and many of the lessons they have learned along the way. This is their story.

“They make an incredible pair, yielding higher results in their life together than either could have produced alone.”
—Jenny Brown Bailey, the first born

“It is interesting to look back and see how their faith and trust not only guided them but also how these virtues were instilled in us, their children.”
—Jeff Brown, the favorite son

“There aren’t very many rock solid marriages out there, so I think we need to look closely at the ones that are.”
—Amanda Brown McLean, the baby

We grew up during a time when marriage, family, and faith were three of the most sacred and important aspects of life.

We have laughed and cried; we have remembered things that should never be forgotten. We have regained some of the lost twinkle as we look into each other’s eyes. We have fallen in love all over again.

Snookie and Bernie Brown have been married for over fifty years. After marrying, they completed college and shared an exciting forty-year career together before retiring. As “re-firees,” they volunteer, write, teach, speak, consult, and mentor. They are Christians who are active in their church; they have three married children and eight grandchildren.