Becomes a Defender of Mankind 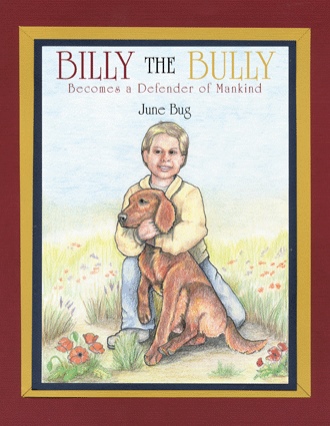 On the day that changed my life, I was in my bedroom getting dressed for school. It seemed like everything and everyone in the world was against me. Loneliness, anger, and hatred filled my body and soul. My grandpa’s dust covered Bible was sitting on the bookcase. I furiously picked it up and threw it at the bedroom wall. God had not helped me. He had taken away my parents and Grandpa Ally. I did not need Him in my life either!

Trixie heard the noise and came into the room to investigate. I was in such a bad mood that I kicked at her. She fled to safety under the bed.

Angrily, I yanked on my jacket and picked up my school books. Then, slamming my bedroom door behind me, I stomped out of the room and down the stairs. Shawna was in the kitchen fixing breakfast. Instead of stopping to say good morning and getting something to eat, I ran past her, slamming the back door behind me.

The horrible, black mood stayed with me as I walked to school that morning. Instead of enjoying the promise of a beautiful spring day, destructive thoughts kept going over and over in my mind. I hated the morning. I hated everything about school: my teacher, the students and the boring lessons.

The late bell was ringing just as I arrived at school. Students were lined up at the outside doors ready to march into the building. There was only one student left on the playground. That boy was one of my classmates, Karl. Karl was always late to class because he was handicapped and had braces on his legs. It took him a long time to walk anywhere. Do you think that I stopped to help him by carrying his book bag? No! Actually I shoved him down as I rushed by to get into line! The really bad part was that I did not care if he was hurt. I wanted him to hurt inside just as badly as I was hurting. It made me feel big to push Karl anytime I walked close to him. Sadly, I thought it was funny to see him stumble around.

Well, that particular day at school was Achievement Test Day. All the students were nervous and worried. If they did not pass the test, they might not be promoted on to the next grade.

Our teacher, Mr. Bailey, was standing by the classroom door handing out two newly sharpened pencils to each of his students as we marched into the classroom. After we recited the Pledge of Allegiance and were seated in our desks, he began to give us instructions on how to take the test. One of the things he specifically told us was that we had to take care of our pencils. If we broke the lead in both pencils, we would not be allowed to get up to go to the pencil sharpener. As a result we would not be able to finish the test. If we failed to finish the test, that would be a very bad mark on our permanent records.

When Mr. Bailey finished reading the instructions on how to take the test, we went to work. Following each question on the test, several possible answers were given. We had to select the correct answer to the question and then use our pencil to blacken in a small circle next to it. I pretended to be working fast and hard, but really I was making a game of marking the answers in a pattern. I did not care if I had a good score or not.

A girl named Rosalita was sitting in the desk across the aisle from me. Rosalita always wore ragged clothes and old shoes with holes in them. She missed many days of school and had a hard time speaking English. Rude students, including myself, made fun of her when she spoke.

Toward the middle of the morning, I heard Rosalita give a faint gasp of dismay. Looking up I saw that she had broken the lead in one of her pencils. Then her other pencil rolled off her desk and on to the floor. It rolled right next to my foot. I picked the pencil up and then, while she watched me, I took my thumb and broke off the lead of her remaining pencil.

It gave me a feeling of mean satisfaction to watch silent tears come into her eyes and roll down her cheeks. She did not dare say a word to me or Mr. Bailey. She knew that I would be very rude to her later if she tattled on me. Rosalita failed the test, and it was my fault.

During recess that day and every day, no one would play with me except boys who were unhappy bullies just like me. These boys would brag about how they were going to cause trouble for the school or some particular student or teacher. They were my “gang.”

After the long day of testing was over, my bad mood was even worse than it had been that morning. When Mr. Bailey excused us for the day, I grabbed my books and rushed past everyone like a freight train. Shoving and pushing my way out of the classroom door, I ran down the hall. No one said good bye to me. No one asked me to stay and play baseball. No one wanted to visit or be around me. I was a mean, friendless, little boy, but I would not admit it even to myself.

Outside the school building, I glanced around to see if anything interesting was going on. Some boys were playing baseball on the school’s athletic field, so I casually walked over in that direction. Trying to act as if I did not care that they had not invited me to join them, I watched from a distance.

Suddenly, the batter at home base hit a foul ball that came directly toward me. The ball landed at my feet and I picked it up. Instead of tossing it back to one of the team members, I held it tightly in my hand and started running down the sidewalk. Now I had an entire baseball team upset with me. They were all yelling at me. Then they started chasing after me trying to retrieve that ball.

Laughing and hollering names back at them, I ran down the street as fast as I could go. I did not realize that I was running in the opposite direction from where I should have been going. The boys were gaining on me. Finally, it dawned on me that they were going to catch me and would probably beat me up. Tossing the ball further down the street and quickly ducking around a corner, I tucked myself into the deep doorway of a nearby abandoned building hoping to hide from them. The yelling boys ran on past. Leaning against the door trying to catch my breath, I laughed to myself thinking how dumb they were and how smart I was.

At that very moment, the rough wooden door I was leaning against slowly began to open. It made a squeaky sound like a door in a haunted house that had not been opened in many years. I grabbed for the doorknob, but was unable to keep my balance. Stumbling backwards into the ancient building, I sat down hard on the floor. Before I could get over my surprised shock and rise to my feet, the door slowly closed shut.

Billy the Bully is the story of William Alistar and the event that changed the direction of his life forever. Billy’s young life began the same as most; he lived with his father and mother and had a good childhood. Then one sad day, after losing his beloved parents in an accident, Billy had to go live with his grandfather who lived alone in another town.

Billy’s grandpa loved him dearly and taught him to read and love the Bible and to be a good person. Then, when Billy was nine, his grandpa died and Billy had to go into foster care. He was placed in several different homes but would eventually need to move to another foster home.

At school, the children call him “Billy the Bully” because they are afraid of him. Billy’s heart is full of hard, black anger against the world and everyone in it. He shows that anger by being mean and rude. He does everything he can to push people away so they keep their distance.

Then one amazing day Billy unexpectedly finds himself in a dark, mysterious forest where he is given a glimpse into the lives of the people he has hurt. When he leaves the forest, his life is changed forever. Billy the Bully tells the story of a young boy whose childhood is challenging but who eventually finds the way to happiness and forgiveness.

June Bug is a former school teacher who resides on a remote ranch in Arizona. She and her husband have thirty-five grandchildren.