When Jesus Knocks, the Angels Play 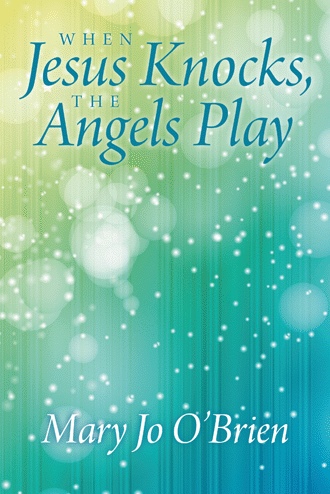 Jesus has taken me on a journey of sixty-two years. He began by healing me as an eighteen month old baby suffering from Trachea Bronchitis. Conventional medicines were no longer helping me and there wasn't anything further the doctors could do to heal me. Our church pastor gave my Mother a special holy water and the prayers to go with it. She was to sprinkle this holy water on me and say the prayers that came along with this healing water. After she did this, she laid me in my crib in my own bedroom for the first time in over a year. I was no longer in hospital vapor tents or sleeping in vapor, using our family bathroom as my bedroom.

Through the night, as my Mother laid in bed praying for the miracle healing I desperately needed, she listened as I wheezed at almost every breath. Suddenly, I was no longer wheezing. Thinking I had died, she woke my Father and ran into my room. They found me lying on my back sleeping like a normal healthy baby. Something had changed! I was no longer wheezing; I was completely healed. The doctors couldn't explain it, but my Mother could.

This was the beginning of what would become a pattern in my life. Two additional life-saving healings took place; the first when I was thirty-three and again at the age of sixty. How it is that Jesus chose to heal me this many times when most people never receive one healing in their lifetime?

In the 1960’s, during those Christian revival years, my Mother became a “Born Again Christian”, a term used to describe people who received the Baptism of the Holy Spirit. I know she prayed for me to find Jesus and for me to know the love she receives from Him every day. But, I wasn't interested. I thought it was for older people to know God and pray. I never thought it was important. But, she kept praying for me.

In 1983, my personal relationship with Jesus began. During this time, I was experiencing a difficult pregnancy, due to severe headaches and allergies. Unable to work, I began to watch some of the evangelists who were gaining celebrity status through the arrival of cable television. Being so sick and in so much pain, I was ready to reach out to anybody or anything.

Even though I came to know Jesus at that time, there would be many more months of this pain until I heard from Jesus. As I cried out to Him that night, He came to me just at the moment I thought was my last. He spoke to me, leading me to the words I needed to say to cast the devil out!

In 1994, I read the book, “Embraced by the Light” written by Betty Eadie. This was the book she wrote of her near death experience, as she lay in her hospital room after a routine hysterectomy.

She wrote about heaven, being the spiritual world we come from and will be there for us, when we complete our mission here on earth. However, it was not her time to die and she was told she needed to return to her family. As was the case with others I have read about, she didn't want to leave Heaven. It took her many years to write her book but once she was able to verbalize and talk openly of her experience, she gave strength to others with discoveries during their own near death experiences, to come forward.

Her story had a profound effect on me. It woke my spirit and created a thirst for knowledge about these experiences. I couldn't get enough to read, to answer my increasing curiosity about Jesus and heaven. Unfortunately, I had to put my curiosity on hold as I embarked on a more demanding side of my career. This took most of my time and created an environment where I had so little discretionary time to do anything other than work and manage my household and family responsibilities. Over time I literally stepped away from my relationship with Christ once again.

In 2000, I used bad judgment when I chose to join others going to a bar after my niece’s wedding rather than going home with my husband. I wanted to extend the party…indicative of being a social alcoholic. My bad habits and bad judgment caused me to be in the wrong place at the wrong time.

Knowing I was headed in the wrong direction and being so far away from what I had perceived God’s plan was for me; I thought I could never turn back to Him again. In the coming months, He would show me how wrong it is to harbor those thoughts or even think that way, to begin with. I am certain that God was waiting for me to hear Him but I wasn't paying attention. Finally, He stepped in and forced a change in my behavior and life. In 2000, I got that “hard knock” from Jesus.

In 2003, I read Rick Warren’s book, “The Purpose Driven Life,” about how every person is born with a purpose toward heaven. We all have a reason for being on this earth. I began to question what my purpose was and asked God to show me why He put me on this earth. From that time on, my life took on events inspired by Jesus, through the Holy Spirit. Often times carried out with the angels. He didn't waste any time!

“When Jesus Knocks the Angels Play” is about Jesus and the angels with their sense of humor. The first time I was able to witness an “angel prank”, I made the statement to my angel, “now you’re just funnin’ with me.” But, more the serious side, there are incredible experiences that leave me in awe of Jesus and the Holy Spirit.

In my book, I talk about my oldest brother Ken and the impact his life and ultimate death had in my spiritual world. During this time, Jesus brought unlikely events into my life in the stories of Jon, Sara, and Ed to prepare me for the coming years and the unfolding of His plan for me.

It is my hope if you don’t already know your angel you will get to know who your guardian angel is and how that knowledge will help you on a daily basis. These angels are real. They walk with us continuously. You will read in this book how they can lend a hand in everything, even help with things you may not have thought you needed until it was over.

In When Jesus Knocks, the Angels Play, author Mary Jo O’Brien tells of being healed of life-threatening illnesses and surviving a serious accident, thanks to God’s intervention through His angels. But despite these blessings, O’Brien was stubborn and certain she knew better than God. But, once she acknowledged that God held all the cards, the floodgates of His mercy opened wide.

When Jesus Knocks, the Angels Play, lets you see the angels’ sense of humor and the ways Jesus answers the author’s questions and confirms her missions. But perhaps most important, you will see the role the Holy Spirit plays in delivering spiritual strength and directives to help others in their most difficult times. O’Brien also describes the experiences she has with the Holy Spirit as she hears the soothing and consoling voice drawing her into the presence of Jesus.

Learning to listen for the voices of God and His angels can be challenging, especially if you are in the middle of a difficult situation. As you read, you will see how the Holy Spirit will bring you closer to those relationships and open your spirit to receive the blessings and miracles that God has for you.

Mary Jo O’Brien is married with a combined family of six children and thirteen grandchildren. Coming from close-knit families, maintaining traditions are among their highest priorities. The author and her husband live in rural Wisconsin, surrounded by an abundant chain of lakes, and travel to warm climates during the winter.