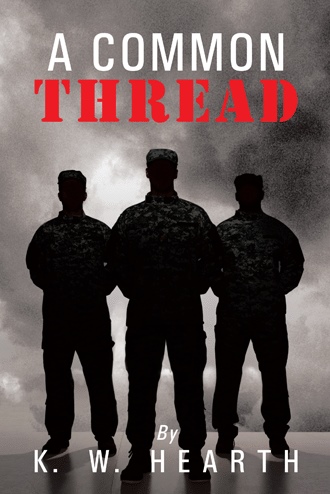 A Common Thread. One of several methods employed to bond people or objects together. In the military service, that thread is the missions members are assigned. They were a team. Professional, tough, efficient. All with the get the job done attitude. Representatives from practically every branch of the military forces. Elite troopers that accomplished those assignments no one would admit to having any knowledge of. Or, getting their hands soiled with. Without question they accepted their tasks and completed the requirements in the most covert fashions. However, as time traveled along its predetermined path. The necessity for clandestine services became less important to those in high places. These operations dwindled and funding was allocated towards other more glaring demands. The Team eventually dissolved. Farewells bid as Operators, agents, were re-assigned to other commands. Some departed military service to follow individual pursuits, along Life's paths. One individual, Joe O'Reilly Navy Seal. One of the special team's roster. Dedicated, tough, a SpecWar, Special Warfare, professional. Yet likeable, friendly, like the kid next door. Unassuming, surely not a trained killer spy type. Unbeknownst to Joe a secret dwelled within his personal closet. A gentler side, waiting patiently for the right summons to come center stage. This alter ego of his became obvious when it appeared, time he serve another master. In time Joe heeds the persistent voice from his heart. He sought counsel from his C.O., LCDR HAWK. Joe relates his feelings and ultimate decision. Hawk considers carefully his response to his friend. He agrees with the new path Joe has decided to travel. When his teammates are informed of the decision, they responded with complete unquestioned support and good wishes. Joe departs his team to become Father Joe O'Reilly, Navy Chaplin Father Joe remains with the SpecWar community to serve in what ever capacity required, with regard to his new posting. Eventually he receives a new set of marching orders from the new C.O. he must leave those his considered his personal flock. Father Joe's new assignment, a challenge he cannot refuse. He bids farewell to the military service, and transfers to a new duty station. The Isles of Eden. The Isles of Eden, a small cluster of islands in the Caribbean Sea. Their Chief, has requested assistance of physical and spiritual aid. Assistance to bring his people into current times. From the time of his arrival Joe is warmly welcomed by the island community. However, Life and Mr. Murphy, fate, seldom travel hand in glove. Rough waters lie ahead for Father Joe and the natives residing on the Isles of Eden. Enter Dr. Enrico Hamadryad. Hamadryad, or Hama as his followers refer to him. A very evil and unstable character, and leader of an emerging criminal cult. The Gifted. These zealots have but one goal, world domination. Hama and his followers have chosen the Isles of Eden as their base of operations. Hama's methods of attaining this objective, any way legal or otherwise, and eliminating any obstacle impeding his path. Well, guess who becomes the thorn in Hama's side? Right, Father Joe O'reilly. Hama dispatches his henchmen to take Joe hostage and retain him as a lever to force the islanders to his bidding. In unthinkable ways. Fearing they stand a chance of losing their beloved Father and friend. They search frantically for a solution to their dilemma. The only possible aid and resolution available lay on the mainland. Father Joe's former teammates. Could they be reached, and would they respond before Joe was disposed of? The islanders had to make the attempt. The island Chief, HawkII, knew of only one of the warrior team. Doc Allon, and the Chief had but one phone number he could try. Short of all out war with Hama, that number was HawkII's last resort. In a secure area on the main island HawkII made the desperate call. The connection completed, HawkII heard the ring tone, he held his breath. One, two, three, four rings. The Chief was about to hang up when he heard a voice on the other end of the phone line. “Doc Allon.” Without wasting time with formalities, the request was relayed. Doc listened and at the completion of the message, he told HawkII Joe's former boss was standing by and was formulating a plan of action as they spoke. Would the rescue attempt be a success, or end in tragedy? Follow the team as they face each hurdle presented with the rescue of Father Joe and the elimination of the sinister cult The Gifted.

At one time, they were a professional, tough, and efficient team—elite covert troopers who accomplished those assignments no one else would dirty their hands with—or would even admit to having any knowledge of. Even though they’re retired now, they still have each other’s back, especially when one of their own faces trouble.

Father Joe O’Reilly, the team’s self-appointed chaplain, would give his life in a New York minute to help someone in need. That has placed him in a situation that may cost him his life. He is assigned to a small cluster of islands in the Caribbean Sea called the Isles of Eden and directed to help the islanders any way he can. But Dr. Enrico Hamadryad has other plans. He is the leader of the Gifted, a criminal cult located on the Isles of Eden that rejects all laws and faith and makes their own. Its goal is world domination. What’s more, the natives have fallen under Hamadryad’s evil spell, and O’Reilly is kidnapped.

His former teammates, led by John Hawk, must find a way to rescue O’Reilly before he is killed, and they aim to put an end to Hamadryad and his evil cult along the way.

K. W. Hearth was born in 1937 and served in the US Navy. He currently lives in Florida.