The Keys to Heaven on Earth 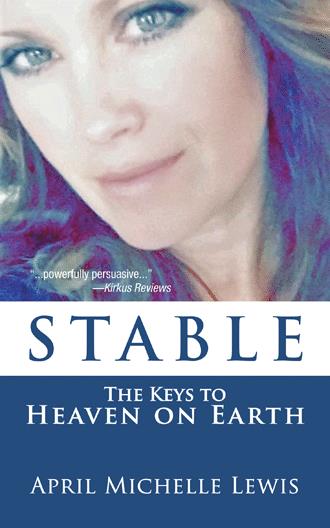 From studies of the near death experience, we have learned that Heaven is a place where there is only joy and laughter; only positive, loving, and understanding compassion. It is a place where there is no sadness, doubt, depression, judging, violence, fear, or cruelty. I imagine a day when we realize that our human bodies thrive and flourish physically when we think and behave in Heavenly ways, and not carnal and Earthly ways. I imagine a day when we can laugh at the thoughts that contradict Heavenly characteristics, and see right through the veil into the true realities of Heaven, making it quite easy to live out the STABLE philosophy. I imagine a day when the way we operate in this world is completely reversed and viewed from the eternal perspective, not with the intention to obsess over death, but to live better lives. Jesus Christ’s message is everywhere. It is in pop culture and modern psychology. His message of love and forgiveness has been backed up by scientific study of the health benefits they bring to the human body; the ‘peace’ He said we could have. His messages of love and giving can also be found as the core values of many of the world’s organized religions, and in ancient philosophies. I love Jesus and He has saved me because He has given me an example of perseverance and courage and how to endure even when I am in incredible pain. He is not an icon, as He is too often viewed as such, but one who walked this Earth and was ahead of His time. He knew what He was talking about, and He was an authority on how to thrive here on Earth. That is why He is a Savior. Motivational speakers, psychologists, and other religions share similar messages. The world has a shared message. Let us come to realize that we all have common goals, values, and beliefs, break down the walls of religion, and finally admit that we all want the same thing, believe in the same thing. If you do not find Jesus to be a personal Savior for you, then believe in his works and teachings as they hold true today more than ever. His teachings truly do overcome the world. They lift the deception from the world, which is a path that is clearly leading us into depression, as the World Health Organization reports. This is not an ‘us-versus-them’ message. This is a call for the entire world to come together. I, as a Christian, embrace the loving and Godly values of Islam, Buddhism, Scientology, and the like. Because that is what Jesus did. He was all things to all people. He turned no one away. That is love in its truest form. I am asking people of the world to do the same. We are a world that is living in complete contrast to the basic cores of our ‘religions’. We are a consuming world, piling up material belongings that will be gone in an instant. That is not reality. It is an illusion. We live with a discriminating mentality, and we cling to our own kind. We mock, we judge, we hate, and even kill those who are not like us, who do not share our traditions, or even dress like we do. We do not accept ourselves. We label ourselves as belonging to one affiliation or another. We complain. We bully. We sue. It is devastating how much suffering and sadness there is in that the world. And yet we just need more, more, more. We give up when things are not going perfectly. Isaiah 45:18 says “God made the world to be lived in, not an empty place of chaos”. And what an empty place of chaos it has become. What baffles me is that as a human race, we have become so highly advanced. We have information and communication in the blink of an eye. We have the internet, smart phones, cures for diseases, modern conveniences, and travel into outer space. And yet, when it comes to religions against religions; well this is just the one area that we remain frozen in barbarity. In the worlds of business, technology, medicine and travel we have no difficulties collaborating at the conference table. New discoveries and the sharing of ideas in these areas are commonplace. We keep improving, innovating, and it is an amazing time to be alive. Computers, televisions, automobiles, medicines, diagnostics, home conveniences and so on, get better and better with the sharing of ideas. Why then, can we not collaborate in the area of ‘religion’? Why is the world so segregated? Why can’t we do the same thing that we do with other modern innovations and collaborate in the same way with our spirituality? When something is not working, and our ways are just not working, it is time to try a new approach. It is time to undo what we are doing.

“This is our cry, This is our prayer, Peace in the World.” ~Reads the plaque on the statue of Sadako Sasaki that stands in the Hiroshima Peace Memorial Park. Sadako died at age twelve from the effects of the atomic bomb that was dropped on August 6, 1945. She is now the leading symbol of the impact of nuclear war. Thousands of people pray for world peace at her statue every year.

The near death experience offers one common experience, and only one. It is time for the world to embrace this reality and come together in love.

“The evidence suggesting that there is no significant difference in near-death experiences worldwide makes possible a major step forward in human relations…We may be separated by languages and cultures, but the possibility of having similar spiritual experiences as dramatic and transformative as NDEs unites us around the world…That makes NDEs an important spiritual concept that can help humanity strive toward world peace. The evidence that near-death experiences are basically the same worldwide may be a reason to stop bickering over differences and instead focus on our similarities.” ~from “Evidence of the Afterlife” by Dr. Jeffrey Long

THIS SPIRITUAL GUIDE PROVIDES A PHILOSOPHY DESIGNED TO BOTH HEAL THE INDIVIDUAL AND ULTIMATELY CARRY THE WORLD INTO A NEW ERA OF UNITY. SUPPORTED BY SCRIPTURE AND SCIENCE.

STABLE: The Keys to Heaven on Earth offers a new and different message as religious barriers are broken down. STABLE is defined by author April Michelle Lewis as Sound Thought, Always Believe, Life of Excellence—truly the keys to experiencing heaven on earth. For thousands of years, humankind has envisioned a peaceful world. Peace can be obtained. It is not impossible and is, in fact, well within our reach.

Various scientific studies support the existence and the true nature of God and heaven. When these discoveries are applied to our lives, it launches us all toward an existence that God has intended for us here on earth. Through the STABLE philosophy, people of all backgrounds across the world can learn to love each other, share their possessions, strengthen their faith, turn their dreams into reality, and find hope in the face of debilitating depression.

This spiritual guide seeks to heal individuals in every aspect of their lives, and ripple out like a beautiful wave to unite the entire globe. It is time to live as though heaven is on earth.

April Michelle Lewis is a Philosopher and Speaker who has helped countless individuals improve their lives using the STABLE Philosophy. Educated in the Arts and Psychology, she has made it her life’s mission to break down barriers in families, communities, cultures and religions. Visit her at www.aprilmichellelewis.com.