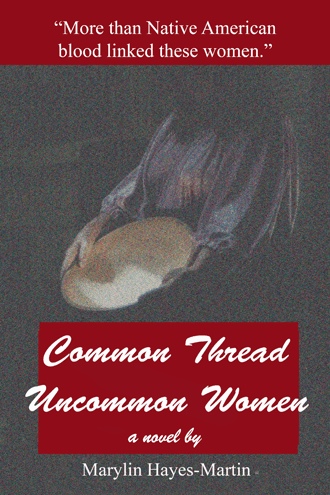 Common Thread – Uncommon Women begins in 1863 at the foothills of the Ozark Mountains in Arkansas. This historic saga covers four generations of women, beginning with the author’s great grandmother, Minerva, who was Cherokee Native American.

Minerva warned her daughter, “Jennie, they put my people on a reservation, took away their pride, and left them with no way to defend themselves. Don’t you ever let anyone hurt you or your children.”

Jennie, Minerva’s daughter, was a determined woman. Her friendship with a slave created tension within her husband’s family.

Thedis moral presence was a blessing to the sick, and when death won, she readied them for burial. She was destined to suffer heartbreaks too horrific to imagine.

Robbie was Thedis’s second-born child. Daily she was reminded of a tragic event, the shotgun blast, her screams, and the smell of fresh blood.

Born with a proud Native American heritage, these women endured hardships beyond modern comprehension, but still found joy and happiness.

Marylin Hayes ─ Martin breathed essence into her characters, taking them through some of the most difficult times in American History: the Civil War, the Great Depression, and two World Wars. Common Thread - Uncommon Women is Martin’s debut novel.

“Marylin Martin’s startling book, “Common Thread - Uncommon Women,” captures the enormous well of strength, both physical and emotional, that the women who helped settle America – and who were born here, of Native American blood – had to draw on simply to survive. Alexander Stuart, author of The War Zone

In “Common Thread - Uncommon Women” a story that covers the lives of four generations of her own family, Marylin Martin takes a historical family saga and raises it to a moving memorable work of art.

Marylin Hayes ─ Martin grew up in the foothills of the Arkansas Ozarks where she was exposed at an early age to the history and culture of the characters in her novel. She was mesmerized listening to epic tales of the shocking tragedies and hardships endured by the four generations of women in her family. She has woven their stories throughout her novel, Common Thread ─ Uncommon Women.

A number of Marylin’s short stories were published in the White County Arkansas Historical Society publication and more recently, in Second Saturday, a literary anthology published by Ladybug Press which is available from Amazon.

Marylin is the co-founder and facilitator of the Sonora Writers Group. She now lives in the foothills of the California Sierra Mountains with her husband, Frank, where she enjoys life as a writer and visual artist.