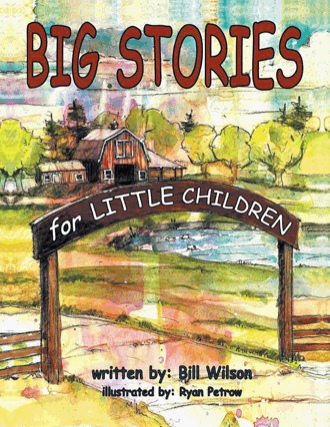 right white clouds were scootin’ across a beautiful blue sky, bumping into each other and allowing a bright golden shaft of sunlight to brighten up Grampa Bill’s farmland, called “A Touch of Nature” as he and Gramma Sue had named it. As he stood there, his thumbs hooked in his brand new red suspenders, admiring Gods beauty, a scripture from the bible came to mind. “This is the day the Lord has made, let us rejoice and be glad in it.” Yes, he was glad. At the far end of his back yard, Daisy a one year old doe, (a doe is a girl deer) was sniffing the chickens in their outside run. The chickens were all in a bunch, eagerly trying to get a look at this new creature! Bertha, our chicken in charge, (C.I.C.) gave Daisy a peck on the nose! Daisy jumped back, surprised but not hurt. Grampa Bill said,” That was just a kiss, Daisy.” Daisy trotted back to the garden and laid down among the peppers and tomatoes. She said, “I’m having a time getting used to all these new animals, I never saw anything like that in the woods by the creek where I was raised.”

At the insistence of friends and family, Bill began writing short stories for reading to his church pre-school children. That is where Big Stories for Small Children was born. Bill and his wife Sue live on their seven acre age old farm in the middle of the big city. The stories in this book are about the animals who live on their little "farm" named "A Touch of Nature". These stories reflect "Grampa Bill's" love of the land, the animals who live there, and of course his love of children.