War By Other Means 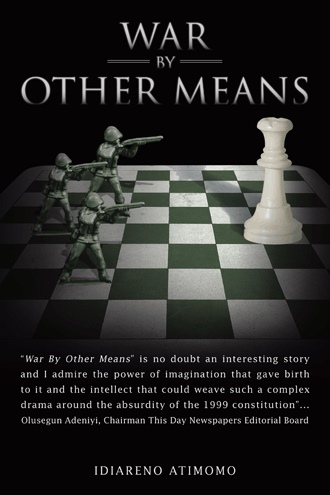 A sudden movement broke Toju’s survey of the room as he directed his gaze to the Delta State Governor who stood up and motioned Toju to a seat at the foot of the table. “Gentlemen”, said the governor, “This is Toritseju Omatsone, the man to whom we have decided to entrust a very important assignment.” The governor looked at Toju and said, “We have chosen you to hold brief for the people of the Southern states of Nigeria in court. We want you to contest the practice of Sharia legal system as a state religion in 12 of the northern states, what do you have to say?” Not a man of many words Toju thought but he said, “May I ask sir, who is 'we'?”To his utmost surprise everyone in the room burst into laughter and backslapping. He was totally surprised and felt so irritated by their laughter that he hit the table to get their attention once again. “What may I ask is so funny?” he asked. Chief Efetobo spoke up, “Your keen mind is a delight to us my boy, I remember when I was a Young Turk lawyer myself back in the old days, when law was still law. A valid question you decided to pose and we are going to give you a valid response. I am sure that you are not unaware of the things that are going on in our country. Our brothers in the North have decided to ride roughshod on us till we are totally humiliated and dispossessed of all we hold dear. The 1999 constitution has afforded them the loophole they needed to effect the introduction of Sharia Law as their legal system. This state of affairs is not good for business and is definitely not encouraging for nation building. The Federal government has adopted the head in the sand approach, believing that it is just an ill wind that will soon lose its’ velocity and conveniently dissipate on its’ own contradictions. We have not chosen this spineless path. This situation is bad enough for what it is and is even worse for what it portends. “We” are known as SOLUTION 1914. We believe the amalgamation of the northern and southern protectorates in 1914 by Lord Lugard on behalf of the British monarchy was a great mistake. The two parts of Nigeria have remained divided and seem to be hindering each others development with the northern political elite preying on the resources of the south. We are committed to emancipating our people from northern hegemony in whatever guise, civilian, military or legal.” Toju let some minutes go by as he tried to let all he just heard sink in. “So how do I come into the picture?” he finally asked. Chief Adekanye spoke this time, “We believe that a document as immensely lacking in coherence as the 1999 constitution will definitely have some loopholes which we can also exploit for the benefit of our people, a sort of war by other means if you get our drift. The 1999 constitution was hurriedly put together by a desperate military government in retreat as we all know. We chose you based on your performance in Law School, specifically, the critique you wrote on the 1979 constitution and the Land Use Decree that has been adjudged to be one of the best thesis ever submitted to the Nigerian Law School. We want you to go to work on the 1999 constitution, tear it apart and put it back together, carefully going over it so as to discover whatever it is we can use as the final solution to end the economic and political assault of northern feudalists on our collective wealth South of the Niger.” For some two minutes there was pin drop silence in the room, only the humming sound of the split unit air conditioner could be heard. “Before you say anything…,” Chief Tokubiye broke the silence, “…let me assure you that the necessary political and economic will and resources to carry out this assignment will be made available to you, all you have to do is ask.” All eyes were focused on him, they were waiting for him to make a statement of commitment. At last he spoke, directing his response to the governor. “I don’t believe I have so much to say. It appears you have done enough background checks on me to know that this is an offer I couldn’t refuse, am I right?” Turning his gaze away from Toju to the faces of the men around the table, the governor said, “Gentlemen. I believe we have found our man.” He shifted his gaze to Toju and said “You are quite an intelligent man; tell me, do you play chess?”

A strange call from a group of influential men begins the gripping tale of Toju Omatsone, a young lawyer who volunteers his exceptional talents to advance the cause of fighting for his people’s share of the “national cake.” He attempts to fight this war by means of superior intellect rather than naked violence. Broken deals, betrayals, and attempted murders streak his path as events lead him and the Nigerian State to a crossroads. With his life in danger, he soon discovers the futility of his cause and the real reasons for the backward state of Nigerian citizens irrespective of their ethnic and religious background.

Idiareno Atimomo is a graduate of psychology and a chartered marketer of the Chartered Institute of Marketing, United Kingdom. He describes himself as an “eternal student of human nature and marketing choices.” He loves politics, reading thrillers, and speaking with people. He lives in Lagos, Nigeria, with his wife and son.