The Girl, The Brown Cow and the CIA? 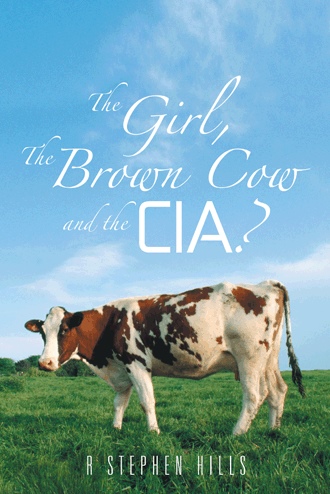 Chapter 1 This morning is not much different than other mornings. The air is cooler maybe, but that might be expected, especially in the autumn in the high country. On this morning, the cattle are the same cattle that were here yesterday and will probably be here tomorrow. They do what bovines do. They graze, chew their cud and pass their waste. Most are black, or black and white, one is different. One is brown, the only brown cow in a herd of fifty three. Like all forgone mornings, birds flex their tendons to uncurl their feet, freeing themselves from their nightly roost. Then they take to wing, to soar or maybe flutter down to scuff the earth with pointed toes. They busy themselves like birds do, searching for an insect or a bit of seed or grain. A new day dawns and activity sets upon the land. Humans are also in motion. The majority are awake because they are moved by time. Most are rigidly bound by a rotating hand or the digital counting of an electronic clock. Some of the awaken humans will eventually travel a county road, maybe to a predetermined destination, maybe not. Some will be on schedule, some will be late. Some are in a hurry and some will be moving slowly. On this particular morning, the fields lay heavy with dew. Here and there, patches of translucent fog hug the hollows. Wispy shapes appear and then vanish, veiled from the eye by insubstantial whiteness. The sun slowly pushes its yellow limb above the horizon and the night muted pastures are awakened. They twinkle with reflected light to all that live or care to see. The blades of short wet grass seem to wink at a swiftly moving red machine. For the attentive, a warning flickers. Slow down, they flash, slow down or die. The heedless driver of the red machine races onward, towards the destination of choice. The rotating tires bite at the graveled road, spitting out towering billows of fine dust. The dust seems to be alive, rolling and tumbling, endlessly reproducing, as it is torn from the rock, clay and sand that comprise the road. The dislodged gravel sounds a warning to those that understand. Slow down it clatters. Slow down or die. A brown cow careens through the meadow’s fencing, kicking and bucking, throwing her head from side to side. She is a feral and dangerous beast, no longer a docile creature. She now is clearly agitated and frightened. With back lags pushing, she charges into the roadway and Inertia brings two improbable bodies together. It can’t be avoided. It happens in seconds, a few rapid blinks of a human eye. A half-ton of muscle and sinew collide fender to flesh, red steel to hoof and bone. The results are spectacular and catastrophic. When the cacophony of disaster quiets, the brown cow lay imbedded inside the red machine. It is limp and lifeless, quite dead. The red machine likewise lay crumpled and crushed. It has found its rest at the side of a dusty country road. It is dead as well. It will never move under its own power again. The county road once again becomes a picture of serenity, or would be, except for the carnage and the unnatural noise of a cooling engine. Its indignant end punctuated with snaps of protest. The dust slowly descends and settles; the laws of physics having played out. Fluids mingle and are absorbed by a thirsty soil. A timeless cycle continues. Nature is restored to balance. The dead are dead and the living continue to breathe. The birds still soar, the cattle graze while the collected dew gradually evaporates, washed in the warming light from the sun.

Follow the life of a girl that is used as a strategic pawn. Her quest for understanding, lead her to find love in uncommon places. In the depths of her tortured soul. Meet the men in her life and how they shape her resolve. Her journey will take her to dark places but she finds a greater underrating and love.