A ROMP THRU SCIENCE

Plato and Einstein to Steve Jobs 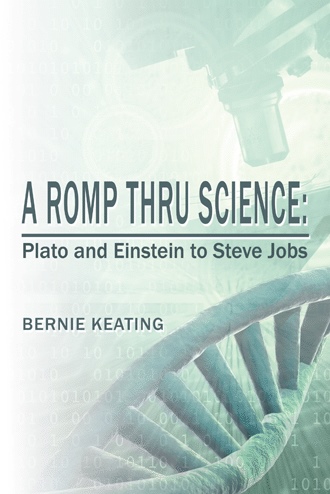 Science is a marvel of modern life. We know how to fight disease, brighten-up our homes, communicate instantly around the world, and a host of things that have improved our quality of life. Most have been discovered during the past millennium. How did man accomplish this and who blazed the trail?


When I graduated from college sixty years ago with a degree in physics, I could claim (tongue-in-cheek) the title of a "scientist". Although I practiced only in the margins of the profession as a manager, my research in college qualified me for membership in the Sigma Xi Scientific Honorary, and I have diligently studied all their journals during the many years since and kept knowledgeable about scientific research.


I am fascinated by discovery: who discovered what, and how. My interest ranges from a look outward at the night sky with scientists such as Kepler, to physicist such as Einstein, an inward look at psychologists such as Maslow, and philosophers such as Plato.


Since I've forgotten considerable during the past six decades, I took myself back to school with research to rediscover some of the answers. Please join me.


We are fascinated by discovery: who discovered what, and how?

This ranges from a look outward at the night sky with scientists like Kepler, astronauts like Neil Armstrong, to physicist like Einstein, chemists like Marie Curie and Linus Pauling, an inward look at psychologists such as Skinner and Maslow, and philosophers like Plato.

Join Keating as he explores the pursuit of scientific discovery from his background as a physicists and a long career in the margins of the academic world.

Bernie Keating was both an executive in industry and a writer. He has degrees from UC Boulder and UC Berkeley, and was Manager of Quality for Owen-Illinois. He has six previously published non-fiction books and one novel. He and his wife live on a ranch in the Sierra’s near Sonora, California.