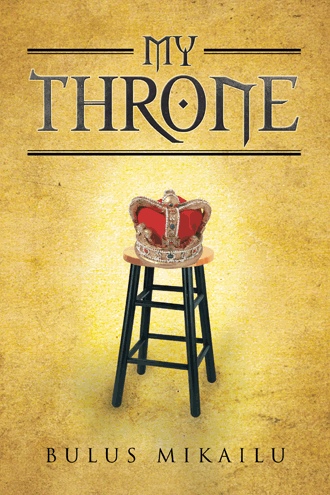 'My Throne', is the story of Steven and his friend Kula. Steven is a teacher while Kula is a government information officer. These two men are disgruntled with the the situation of the society. It is made worse with the attitude of government in power when it sponsors a rally to support its activities despite its monstrous activty. The accident of Steven and his eventual meeting with Masoyi paved way for a radical movement that embarasses the government because of the ill-fated activities the government engages unto. Steven and Kula live in a free life and have a social circle that meet at a beer parlour and discuss the happenings in the society. Mona Lisa is the centre of 'frank talk', whatever one hears is mostly true because it brings people from different spheres and all walks of life. Due to the 'gadfly' activity of Steven he was accused wrongly at his place of work for making a student prgnant. This accusation led to his dismissal from work. For want of evidence on Kula he was spared the boot. The dismissal of Steven did not deter, it invigorate him to fight harder with Masoyi always willing to give him more damning evidence that exposes more government atrocities. The opposition party was not spared inthe government vendetta. In onme of their numerous meetings all the attendees were arrested on the guise that they sponsor Steven's publication which is a security threat. As election approaches, there is diasaffection within the ruling party and some of tje members defect to start a new party which leads to a spate of assasination. The government points accusation fingers at the opposition and its supporters. As Steven and Kula contnue their work, they discover that Madam at Mona Lisa was on the government payrpll thus reveal to the security agents those she suspects to be sympathetic to the opposition.

My Throne is the story of two friends who are disgruntled with the situation of the society. They decided to go against the system thereby putting their life on the line. The government felt uncomfortable and threatened, causing it to pass a death sentence on them. They were not detered but continued their struggle. Can they survive the fight?

Bulus Mikailu is a graduate of English with specialisation Literature from the University of Maiduguri, Nigeria. His writing experience can be traced back to 1994. In 1994, he participated in a National Essay competition organised by the Federal Ministry of Youth, Sports and Culture for Tertiary level where he emerged second. Since then he has not relented in writing. Educationally, he graduated from Secondary School (High School) in 1992 and then proceeded to a College of Education (a Teacher Training Institution) where he read Education combined with English and Religious Studies. On completion he was awarded the Nigeria Certficate in Education (NCE). He took up a teaching job in a High School as a teacher of English. In pursuance of his education, he entered the University. While in the University he wrote in all the known genres i.e poetry, drama, short stories and fiction. One of his plays ' Forbidden Fruit ' was staged at the University of Maiduguri in 2003. He specialises in fictional work. He writes book suitable for young adults and matured people. He writes abouth the socio-economic situation with reference to Nigeria and Africa in general. He tries to present the pcture that that is pre valent in the continent. When he was in the University he was a member of Association of Nigerian Authors (ANA) at present, he works as an administtative officer in a government securty outfit. His interest is reading, writing and acting. He is married with two kids. He lives in Yola, Adamawa State capital, Nigeria.