A Mother & Daughter Story of Spina Bifida, Home, and Family 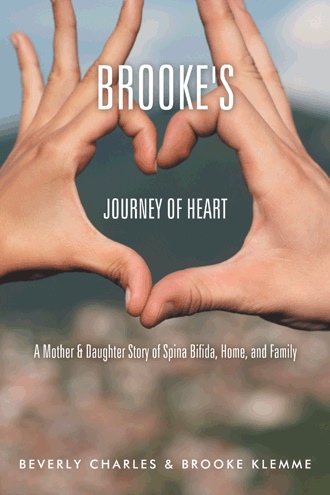 Brooke - I was born on Friday, July 30, 1971, at 6:45 p.m. in San Antonio, Texas. I’ve been told that I was born with Spina Bifida. My parents said I was taken from one hospital to another because I needed a surgery to close the opening at the end of my spine so I could live. While I was being rushed to the hospital in an ambulance, my mom was waking up. I was alive, three hours old, and on my way to surgery. * * * Waking up from a drugged sleep, I notice I am still in the delivery room. A steely cold envelops me. That antiseptic hospital smell lingers all around me. I see five men standing at the foot of my hospital bed. There are four familiar faces, those of my husband, our minister, my obstetrician, our pediatrician - and a stranger. Our minister, Don, speaks first. “Beverly, you and Paul have a baby girl. She has some problems.” Then Don says a prayer. I don’t remember the words. What I do remember is thinking that Don’s voice carries authority. It is a voice I trust. “She’s on her way from this hospital to Santa Rosa Children’s downtown for surgery,” Paul says. “Dr. Lee can explain.” Dr. Lee identified himself. He is the neurosurgeon who will close the opening at the end of our baby daughter’s spine. He steps forward, close to me, saying in a soft southern- tinged accent that managed to communicate both kindness and confidence, “Brooke was born with Spina Bifida with Myelomeningocele, which means there’s an opening at the end of her spine. We need to close it to prevent more damage to her nerves. Beverly, do you have any questions?” I hear myself saying, “I have lots of questions, but I don’t want to know the answers right now.” I have never heard of Spina Bifida Myelomeningocele, and I am terrified. I imagine my baby with a huge hump on her back, growing up bent over, limping about. Where did that image come from? Then the men are gone, and I am alone in a room on the fourth floor, not in the maternity ward. * * * Brooke - The morning after my birth, my dad startled my mother with the flowers he chose to give her - white mums. When mom was a little girl, she and her Sunday School friends made Kleenex corsages for the mothers to wear in church on Mother’s Day. They made white ones for the mothers whose moms were not alive and pink ones for the mothers whose moms were still living. Mom was afraid to ask Dad about me. When he told her my surgery went well, she was so happy she cried. After my first surgery, I developed hydrocephalus. My parents were told that I might not be able to walk, talk, or have a normal life even if I had the second surgery. I proved the doctors wrong. I know my parents had to make a big decision about whether or not to choose the second surgery. If I had to give advice to parents with a disabled child about choosing, I would tell them to let their child have the surgeries. I’d do that because giving the child a chance at life is showing your love. No matter what, you are there to help – challenges and all. Sometimes I ask myself - If I could go back in time and Mom could have had in-utero surgery to correct the problem before I was born, would I have wanted her to? I don’t know the answer to that question. I love my life. It has been rough, but it has also had a lot of happiness. I was put on this earth for a reason and I think, if I was supposed to be different than I am now, I would be. Sometimes I think God could have done different, but He didn’t. Beverly – Whew! We differ on that one. If they had had the technology to perform in-utero surgery and possibly give you a life with less physical and medical challenges, I’d have done it. What if you could walk without crutches and braces and travel long distances without the aid of a wheelchair? What if your bladder and bowels worked effortlessly for you? What if you could drive any car, not just one with hand controls? Those are the questions that come to my mind when I consider that question. And God. God is synonymous with Love for me. Oh, the love I felt for you when I did finally see you in the neo-natal intensive care unit on Sunday. * * * While Brooke was in neo-natal intensive care healing from her first surgery she developed hydrocephalus. At the request of our neurosurgeon, Fletcher Lee, our minister, Don, called us in to tell us he and Fletcher had talked and he wanted us to fully understand the possible consequences of the decision to proceed with the next surgery. “You’re young, still in your twenties,” Don said, in his office, while packing down the tobacco in his pipe. “You have two other children to consider. Even with this second surgery, there is a chance that Brooke will be both physically and mentally challenged and require constant care. Are you prepared for that?” I took a deep breath and said, “We’ll face those things as they come.” Paul spoke. “Beverly and I have talked about this, and we agree that it may be hard, but we can’t deny Brooke the surgery.” “Fletcher’s one to paint the darkest picture, so you won’t be surprised when things don’t turn out like you expected,” Don said. It was clear that he and Dr. Lee, the neurosurgeon and Don’s tennis buddy, had talked extensively about this. Quoting John Grossmann in Family Health, “To those familiar with the implications of this birth defect, it brings up…a torturous question: Life or death in the nursery? 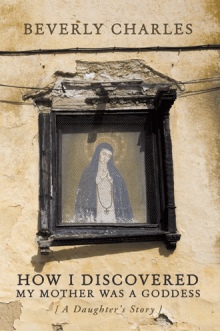 How I Discovered My Mother Was A Goddess
Beverly Charles
$14.49

Brooke’s Journey of Heart is the story of a daughter who lives each day with the disabilities delivered with her at birth and the mother who gave birth to her. Beverly Charles asked her daughter, Brooke Klemme, if she would like to write her story of living with Spina Bifida. Brooke responded, "Yes! There are two sides to every story." Brooke and Beverly show us both sides of their story in the context of faith, family, and friends. In 1971, more than 6000 American children were born with Spina Bifida, but like most people, Beverly Charles knew nothing about this condition until she gave birth to her third and last child. In this touching memoir co-authored by Charles and her daughter Brooke Klemme, we learn first-hand not only what it means, but what it feels like - to raise a disabled child, to watch her suffer and triumph, and to be that child, who now as an adult, tells her side of the story. Most parents will never have to answer this question - should your new baby live? For Brooke's mother, there was only one answer, an answer that would involve multiple surgical procedures, interminable hospital stays, and an army of doctors and therapists - an answer that would change her and her family forever. This book is a spiritual memoir and a medical one. The authors make connections with Eastern and Western religious practices that have seen them through difficult and joyous times for over four decades. Their story transcends the personal to offer hope and help to other parents who have faced the same hard question and who, like Beverly and Brooke, answer "YES." As one reader said, “I loved it. I laughed, cried, got mad, got sad, and now feel like a part of your family.”

Beverly Charles & Brooke Klemme Beverly Charles lives in rural Texas with her husband, Larry. They each enjoy the big Texas sky, the fauna and the flora, visiting with family and friends, reading lots of books, watching movies, cooking, traveling, and exploring the artist life by learning more about writing and painting. She writes and takes photographs, and he paints using watercolors. She coaches a few clients, some in writing and some in leadership, and offers memoir writing workshops. This is Beverly's second book. Her first book was a memoir, How I Discovered My Mother Was A Goddess - A Daughter's Story. Brooke Klemme lives in the Denver metro area with her husband, Phil. They both work for the Federal Government. Each year they invite family and friends to share in the tradition of walking in the Denver Spina Bifida's annual Walk 'n Roll event on Mother's Day. Together they enjoy attending concerts by their favorite artists, going to Rockies, Bronco, and Avalanche games, travel, family, friends, and home projects. This is Brooke's first book.