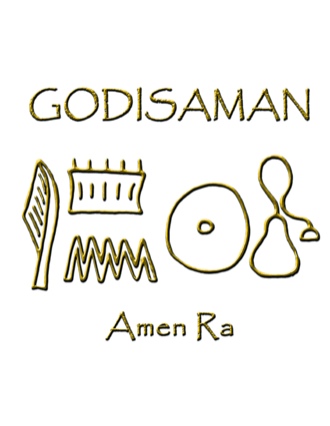 The book describes Amen Ra´s tragic experience in South America after exile, illegal deportation, from Houston. Amen Ra protested against the war in Iraq. He told Houston and Miami that George Bush was the Antichrist. Houston means “His-Town.” This means the Savior`s town. All history, “his-story,” is connected with the story of GOD, of the greatest hero. For this, Amen was illegally sent out of The United States with a false charge of “immoral turpitude,” and sent back to his country of birth, Colombia, after living in Houston for 23 years and winning his case in court. Amen Ra studied engineering at UT. He had been adopted by a Brit, Graham Hamilton, who had named him Alexander Hamilton; amazingly a name already very important in American history. Graham works for Western Atlas, Dick Chaney`s petroleum company with a major interest in Iraq. Graham thus abandoned Amen Ra after his protests. Amen Ra claimed that petroleum money was the main reason for the war in Iraq not civil rights! Because of the war, Amen Ra’s family abandoned him and only now, after 8 years of non-communication, give him minimal help. Through a good friend, Henri Chen, Amen was able to publish this book. Amen Ra is a 39 year old English teacher who has taught all over the world including at U of H in Houston. His work called FIVE, on the universal design of the English language, can be found at the end of the book. Amen Ra was on a quest to discover the true meaning of life, of GOD; the greatest goal of any man! He visited Egypt and realized, after reading the ancient Papyrus of Any, that the hero, Horus, had to fight against all injustice regardless of how great it was, or humanity would plunge into darkness, into The Plague. This story of the hero, of Horus, notice the similarity in writing, inspired Amen to protest heavily against Bush who previously governed Houston. Bush betrayed Al Gore and America in a false electoral recount led by his brother in Miami and his father with the CIA. This betrayal led the world into war and corruption! 911 was an emergency call to wake up the world about Bush`s theft. 911 really means “nine, one, one; emergency call... as one would dial on a telephone, the people have been betrayed.” The tragedy of this moment occurred on this very significant date because of the great crime that was done by Bush for oil money. Amen realized that this was the same case as in the Papyrus of Any, where the world was sent into social disarray because of one brother, Seth, murdering the other, Osiris, in cold-blood over a woman, Isis, who was left pregnant with Osiris`s child Horus. Horus then grew up to fight Seth and restore world order; peace. So, Amen Ra went and fought to save the world, as Horus did in the story. He discovered that a man, after fighting for truth, more than anyone ever before in history, turned into GOD! GOD is like the sperm that wins the race when he reaches the egg first; this man controls the destiny of all humanity, he makes all in his image! This is what Christ was speaking about when he said that he was the path, that he was the way, that he was the creator! Amen Ra saved the world from nuclear catastrophe and became GOD. Before becoming GOD, meaning before speaking to Christ, he wrote this book GODISAMAN! Amen knows that GOD is he because Jesus Christ himself, as he must, now speaks to him and guides him. Christ can only speak to him who has turned into GOD, no one else, since the story of life is about the living of today; and the story is about Amen Ra now not Jesus Christ. Everyone must stand in front of the light and judge Amen Ra; determine if Amen Ra really is GOD or not! Those falsifying judgment will be condemned. This is why you must read this book! The other name of the Papyrus of Any is The Book of Coming Forth into the Light, which is what all must do in the moment of truth when GOD returns to Earth. Christ says that it is important for all to listen to Amen Ra carefully, and to give him a chance to speak in public and save all from further fall. GOD is the supreme leader of all humanity, the best man of now and the past; the greatest hero ever. GOD is a man! In the sky, like Christ, he is called The Lord. Christ is a remnant of his previous life on Earth as he speaks to Amen Ra. The greatest concern today to the people on Earth is Amen Ra. Amen Ra is their supreme leader. When GOD forms once again, as it is now with Amen Ra, he must be followed! Christ was the last Savior. Amen Ra is the new Savior.

Amen Ra is GOD. Christ speaks to him. In ancient times, GOD was called Pharaoh. From Egypt, The Papyrus of Any tells the story of how the hero Horus becomes GOD. Amen studied this Papyrus and used it to protest against the Iraqi war in Houston, Texas, and became GOD! Today, Amen has been exiled from The States to Colombia and needs your help greatly! His email is amensphinx@hotmail.com. Please contact him! Or call him at (57) 317 765 6102 in Colombia.