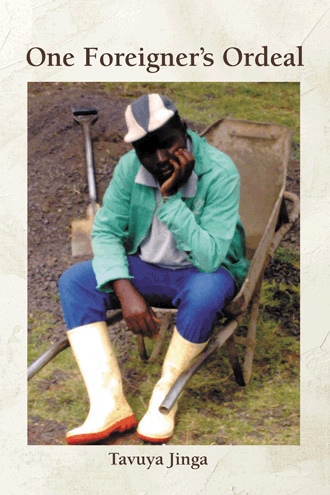 Chapter 1 “How many of my neighbour’s servants have bread enough and to spare, and I perish with hunger!” The 2007 Christmas and the ensuing New Year were perhaps the bleakest of my life. I had no money in my bank account to make the mandatory yearly pilgrimage to my rural home to be with my people. Even if I had some, my bank would not have been in a position to dispense it. Zimbabwe was running short of its own currency. Supposing the country had no currency problems, the season would have been bleak all the same because there were no goods on the shop shelves. Had the goods been available still, their prices would have presented a problem. They were far beyond the reach of the ordinary person. A senior civil servant like me required one third of his salary to buy five hundred grams of dried kapenta fish. The latter fish was a less-than-modest relish which in the good old days, every Zimbabwean could afford. Masvingo, the country’s oldest town in which I resided, cast a perfect picture of a funeral scene. The people were barely managing. Hope was evaporating; the economy was ailing; the banks were stressed and the country’s inflation rate was hopping mad. For me, one survival strategy had been to await the arrival of the Gweru-Masvingo train on Wednesdays. It brought with it hordes of vendors from the outlying area of Zimuto who sold all manner of mushrooms, milk, vegetables and even beer at reasonable prices. I lack the necessary experience to give a word about beer consumption patterns. It however needed no specialist to tell that the local beer industry was under severe stress. There was no fuel to deliver the merchandise to the beer outlets, no spare parts to service delivery vehicles and no viable price at which to sell the liquor. The train therefore provided the necessary reprieve to those who loved the bottle. The vendors from Zimuto played a cat-and-mouse game with the police. A requirement that the vendors pay a licence fee before they sold their merchandise in town was the cause of trouble. The charge was over the roof. To evade paying the licence fees, the vendors hid with their wares in the tall grass in front of the railway station. We had to slog through the shoulder high grass in order to buy from them. In such a scenario, one begins to care little about the hygiene that goes with the preparation of the home-brewed beer, what Bush the mushrooms are picked from or how well the milk has been handled until the moment of its sale. Our priority was to fill the stomach. The alternative choice - starvation held no appeal. We had to be careful to buy these items expeditiously. Local vendors were quick to buy them for resale at exorbitant prices. The innovative vendors used the law of threes in their business. That meant they aimed to get three times the money originally ‘invested’ as profit. They also resold vegetable leaves in threes at a cost of twenty thousand Zimbabwean dollars per ‘bundle’. The city had run dry. It was wallowing in serious trouble. There was no water. It needed foreign currency to buy water treatment chemicals. If the local currency was not readily available, then that should tell how elusive the foreign currency must have been. Besides, Council appeared unwilling to allocate its scant resources towards water provision. These were the days of the Zimbabwe National Water Authority (Zinwa) debacle in which local authorities were required to surrender the water delivery function to the latter organisation. There seemed to be little motivation on the part of Council to expend its resources towards a function they were soon to relinquish. For the greater part of the so-called festive season, opening water taps was promptly answered by the latter gadgets vomiting copious volumes of air and making prolonged gurgles before dying into sudden stony deaths. But air is not what people need to run water system toilets. Blair toilets would have served them better but these had not been part of the town’s physical plan. The absence of water rendered toilets unusable unless of course residents were willing to have a rancid smell hovering in their homes. They did not seem to like it so they turned to the town’s pathways and byways for relief. Thus Bush toilets became fashionable. Like the majority of the people of my ilk, I had long stopped using commuter taxis. I could not afford them any longer. Forced to trudge along the pathways and byways, I often saw the not-so-pleasant spectacle of human fecal matter. My observation was that this human excrement was mostly Brown. This state of affairs would be the source of a cholera crisis of immense proportions gripping the country in 2008. The epidemic was of far greater magnitude than “The Great Stink” which hit the Great Britain from 1854 to 1858. It prompted parliament to order the building of a new sewage system to prevent sewage from flowing into River Thames. Our government had no interest in such foreign solutions. I am yet to find a government that follows the Bible to the letter as much as ours did. To prevent epidemics such as cholera, The Good Book says in Deuteronomy Chapter 23 verses 12 and 13: “Designate a place…where you can go and relieve yourself.” Pathways and byways had been duly designated for this purpose. “As part of your equipment, have something to dig with and when you relieve yourself dig a hole and cover your excrement”. The government certainly had something to dig with. It was furiously digging at Western leaders such as Mr. Blair, Mr. Brown and the then recently retired Mr. Bush. The ‘troublesome’ trio was accused of waging biological welfare on an independent and sovereign state. What a likely story!

One Foreigner’s Ordeal is a story of how a Zimbabwean civil servant; a teacher, is caught up in Zimbabwe’s economic implosion. It chronicles his flight into South Africa and depicts the new challenges that beset him in the new environment. Among these is the search for documentation enabling him to stay in the country legally, xenophobia and the all elusive search for employment. The book is alive. The characters are so real one can feel them and almost touch them. Once I started reading it, I could not put it down. - Tsitsi Dzinoreva Lecturer in African Languages and Literature – Great Zimbabwe University. Written with an eye for detail and a sense of humour any reader will find impeccable and refreshing…a must read for serious lovers of literature. - Mika Nyoni Lecturer English – Great Zimbabwe University.

Tavuya Jinga is a Zimbabwean. He was born in Masvingo Province. He was educated at the University of Zimbabwe and Solusi University. Tavuya has taught in Zimbabwe between 1993 and 2007 and in South Africa since 2008. One Foreigner’s Ordeal is his first novel. Apart from this novel, he has co-written research articles published in The Zimbabwe Bulletin of Teacher Education and the Zimbabwe Journal of Educational Research. His e-mail address is taujinga@gmail.com.