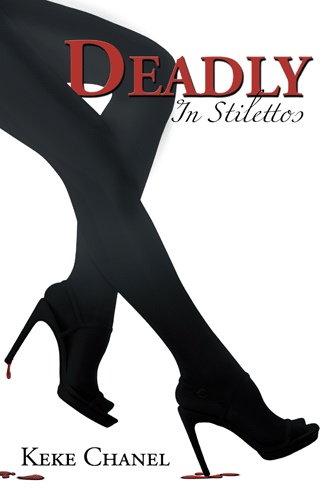 Deadly in Stilettos is a book about love, betrayal, revenge and hope. It takes you on a rollercoaster ride of emotions, leaving you falling in love with the characters, their stories and placing yourself in their footsteps. Deminis Bradshaw, the main character, will have you laughing, crying, screaming, cheering her on to the finish line, and also coming out buying stilettos. With her sexy style, brave persona and professional demeanor, you will be able to identify with her situations and want her to succeed on her unpredictable journey. Her love for beautiful shoes and the way she uses them as her therapy, will leave you speechless. Deminis Bradshaw is a very beautiful, intelligent and successful woman. Although she has traveled all over the world, experiencing the many perks in life, she is still empty inside. All of her life she has been used and abused; left heart-broken. It all began when her mother died giving birth to her. After that, her father completely turned his back on his, disowning her. Being raised by her aunt, Deminis worked hard to get good grades, so that her father could be proud of her and come bring her home. When she is forced to spend time with him, he treats her like trash, beating her for no reason at all. Deminis still loved her father, keeping his secret from her aunt. Because she wanted the love of the only man she loved, Deminis turns to the arms of a much older guy, who promised to never hurt or abandon her. When the abuse began, Demi covered it up not wanting anyone to know that her life wasn’t as perfect as she portrayed it to be. After being introduced to stilettos at the age of fifteen, Demi sort refuge in them, pretending that her life was normal and not a total nightmare behind closed doors. When her aunt passed away, Demi was left alone again to take care of herself. Running away from home with her first love seemed like the best thing to do, until he abandoned her on a dark highway one night, in the middle of nowhere. Still Deminis continued to do well in school securing a full scholarship to a prestigious university, graduating at the top of her class. With hopes that her father would still come to bring her home, Deminis never got into trouble in fear that he would be embarrassed to never want her. After years of success, living abroad, Demi gave up hope on having her father in her life. She found herself looking for love in all the wrong places, and in the arms of an older man. Slowly Deminis lost control of her life, allowing all of the people she let close to her treat her like a doormat. One night as she sat in her living room, she wrote down the names of all the people who ever hurt or made her feel low. When the list was complete, Deminis sought out to take matters into her own hands and regain her life back. No one else would ever cause her pain. She was done being the nice guy, the little girl, too naïve enough to stand up for herself. No one else would hurt her.

Deminis Bradshaw is a beautiful, intelligent, and successful woman. She has traveled all over the world, living a life most people would envy, but deep down inside she is torn. Before she was even born, trouble placed a target on her back. Losing her mother at birth, Deminis never had a chance. Without the love of her father, she finds herself looking for it in all the wrong places. Years of being taken advantage of, abused, and left heartbroken transforms Deminis into a person who is simply fed up. She creates a list, beginning with her father, and goes on a journey of redemption. Will she finally have the life she always wanted, or will it spiral downward, leaving her more scarred than before? She finally meets someone who showers her with the love and affection she always hoped for. Constantly reminded of her past, however, she questions the motives of her new beau. Can she ever close the chapter of pain in her life, or will she lose the only person who has ever taught her what love should feel like?

From poetry to short stories, eventually leading to novels, Keke Chanel has always had a passion for writing. Growing up in a small country town with limited opportunities for children, Keke spent most of her youth in her room, filling notebook after notebook with stories about life and love. In 2011, she started a blog to showcase some of her work. Overwhelmed with the amount of followers and feedback it drew, she was determined to share her writing with the world. Although it’s been a long journey, she delivers her first full-length novel with Deadly in Stilettos.