The Far Out Café 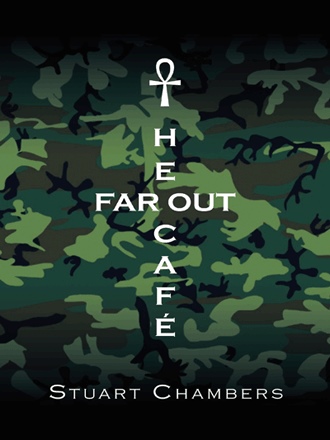 The Generali’s attendants called the patients back to the asylum by blowing conch shells. There had only ever been four patients in the small island clinic and not one of them was older than sixteen. They sit grim-faced in ill-fitting pink-grey-striped pygamas and sandals that have been soled with strips of rubber cut from Soviet Army tires. Only Daniel is hidden, he sits in his underground cell and stares at the slime-black walls. The man they called the Generali is Uzbek; he spends his nights polishing a Soviet proficiency badge, 3rd class. On this particular night he shines the buttons on his uniform. He has made a decision; he leaves his candle-lit cell and ferrets down crumbling corridors to the place where the attendants sleep; there are two attendants; one gap-toothed, brawny soldier called Rusanov who wears a red-black chequered eye-patch and a swarthy boy called Yefrem. The Generali kicks the bunk of the brawnier of the two attendants. He does not like brutality; he has Rusanov for that. “Get dressed,” the Generali says, “and get check on him again.” The asylum walls were toad-green and peeling like decomposing skin. Only one of the boys was fully awake, he sat almost foetal-like, looking utterly tired; he made crazy lolling movements with his head; he nodded at Rusanov as he passed, and said “Who the round-eyes?” Rusanov did not reply. “Answer me?” Rusanov wagged his finger at him. “I think not.” You will one day thought the angel boy The younger boys in the bunks around him looked uneasy. Daniel could only move one hand; he touched his face; his side and then his legs before he fell back. “I need toilet,” he shouted but if people heard him they did not respond. He called the nurse’s name. “Beth”, he shouted, and stopped to listen before he called for her again. When Rusanov arrived he came in wielding a hand-hewn baseball bat. “Coochy coo,” he said. “It’s me, not Beth”. He pinned Daniel to the ground, ripped the dressing from Daniels chest and left. Daniel is purple-black; the yellowing wound in his shoulder is heavy with water. When the rain falls the earth stinks and fills with filth, and the faeces of dead men float around Daniel’s legs. Above Daniel’s cell black rain clouds queued up like bunched taffeta. “Coward,” Daniel shouted, “Kill me now if it pleases you,” and prayed that they would do it soon. “Just do it” he shouted. The Generali sat at a desk with a Tokarev pistol within reach of his right hand and a bottle of Baltika beer in the other. He pushed the beer toward Daniel and toyed with a loose brown-tipped tooth; he was a meaty man with a rigid stain of Hitler type hair that lay like a dead raven’s wing across his forehead. The Generali teased the beer closer to Daniel who sniffed the neck and then drank it down. The Generali changed his tack again. “Take more,” the Generali said and Daniel looked surprised. “I think that you are nobody,” he said, “but you wear the dog tags of a dead man and you seem scared. Do you want a cigarette?” the Generali asked and Daniel nodded. “Would you like to do this the easy way?” The Generali asked. “I normally take the hard way.” The Generali laughed before he said, “Here’s my problem. I’m due to leave this shit hole in three days time and you can believe me when I say that I want to go. Two, you are not American and three, your name is not Daniel as your dog tags claim and before you say anything you should know this. Daniel dies on 19th December 1974. He does and that’s in two days time. Sentenced to death” he whispered. “His call Sign was “Gunfighter”. He was aged twenty. Height: 5ft 8ins. Weight: 75 Kilos. Hair colour blonde. He had green eyes and his only identifying marks was a tattoo of skull and crossbones on the chest. Occupation: Signed US Infantry. Decorations: None. That’s you, you scrawny bastard.” “I’m not dead yet,” Daniel said. “Not quite, that’s true but play ball and I might deem an Army Commendation Medal suitable to appease your grieving mother.” “Is there another way we can do this?” Daniel finally asked. “We can do this whichever way you want.” “I’m not Yank, that’s true enough. I came into this war by accident. I wore the dog tags I was given. As what we all did. You should believe that.” “I do,” the Generali replied, “Drink more beer and let’s talk some more. There is no rule that says that you cannot take what you can get whilst you are here. Bring more beer”, the Generali shouted and added, “I can be an asshole too.” “Would an asshole give me beer?” asked Daniel The Generali had three white-faced, pink-balled monkeys in a large bamboo cage that ran the full length of one wall. “Fruit eaters,” he said, “two males, one female; I am starving them to see what will happen next.” He opened a drawer and shook a photograph from an envelope onto his desk; he passed a photograph of a familiar face to Daniel. “You know this man?” Compay, Daniel thought, he looked at the picture and shook his head and was on his back in seconds. “Don’t,” the Generali said, “I’m more of a bastard than you can ever imagine but if you do play ball I will give you more than beer and cigarettes; and your mother will believe you died a hero. All that I ask is that you tell me who this man is,” he continued, “Answer me.” Daniel retched and nodded. “Do you understand me?” “Yes.” “Good,” said the Generali. “Let’s start again. Do you know this man?” “No,” he said and spat blood onto the floor. “That’s not a good answer, not when you were doing so well” the Generali said. “Do you believe in God?”

The End-No it isn’t! During the fall of 1969 Daniel Dyer stands alone at a still point between the disappointments of his childhood and an incredibly uncertain future. He is a boy from Yorkshire, living in America who has been abandoned by his father and then his mother and has signed up to fi ght with the US army in Vietnam. The Far Out Cafe is full of characters and events: a blues singer, a Cuban called Guerrero and another called Compay, with his head full of conspiracy theories, ‘Birdmen,’ a chapel dating back to the 2nd century, an isolated island, a pack of marauding sharks; one of mythical proportions, a psychotic Soviet called the Generali, a barbaric guard called Rusanov and his syphilitic assistant, Yefrem. This is not merely a story about the atrocities of war. It’s a story about who Daniel meets when he has been left for dead; a boy called Angel and a girl called Beth. It’s about the way we live our lives and what happens when we place our Faith in God when things go horribly wrong. It’s a savage yet tenderly lyrical story about an unforgiving time and indestructible love. ‘I sat down, cleared my mind, and ‘The Far Out Café’ blew it apart. It’s a really great story and it’s told in such a surreal way, it messes with your head so much, delightfully so, but what really caught me is the sense of magic and mysticism that is woven into the story. A huge story that has roots in an even greater and deeper meaning. The spiritual clashed against the brutality of men is incredibly powerful. Good to fi nally be challenged by a modern book that gives the mind a great workout. In fi lm terms, very Stanley Kubrick’ - David Popescu - Hooligan Filmworks, Canada

Stuart is a fi lm and video Producer. He has lived in the Middle East for over 30 years. He had his fi rst script broadcast by the BBC when he was seventeen. He has written and produced numerous documentaries’ including a fi lm for the Qatar National Day that tells the personal stories of four families who suffered terrible tragedy when disaster struck their region. Kashmir, Beirut, New Orleans and Banda Aceh could seldom have appeared on the same travel itinerary but they were all on Stuarts: Seventeen fl ights, nine countries and a total of fortyfi ve thousand miles; a journey of epic proportions to some of the most isolated parts of the world where he would uncover stories of real courage and dignity and survival against the odds. Stuart is equally at home shooting a hi-end TV commercial with a large fi lm crew or out on location with a director with camera on his shoulder. He was born in Yorkshire, works in Dubai and lives in Romania with his wife and family.