Pierce Ackles and the Leather Apron

The tale of Jack the Ripper 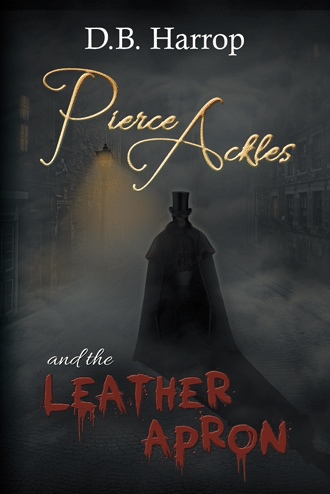 A brilliant detective, a crazed killer, a mysterious couple, a handful of prostitutes…

Lives converge and history is altered as an entire city is plunged into an era of panic and terror. A ruthless killer ravages London, seizing its helpless prostitutes; murdering and mutilating their bodies before vanishing, untraced and unpunished.

In a time when lives hang in the balances, when murder is the consequence of failure, when a city teeters upon the brink of pandemonium, it is up to one man to unravel the mystery, to put a face to the myth-like villain; to end the gruesome killing spree.

Delving into the bleakest moments of 1888 when death itself walked the streets of London and blood pierced the denseness of the fog, Detective Pierce Ackles is forced to face his most formidable opponent yet: the illusive Jack the Ripper.

Through meticulous analysis of evidence, an uncanny perception of the darkest elements of human nature, and an unmatched wit, he is set against the world’s most cunning and brutal killers. Driven by a steely commitment and unrelenting desire to see justice prevail, he is the embodiment of every criminal’s most dreaded opponent.