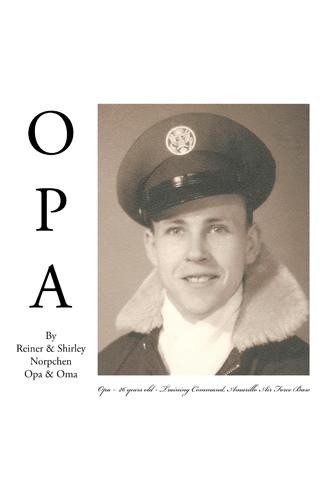 About that time, the Lebanon crisis started. The 95th had to have at least 4 airplanes in the air at all times to protect the Washington, D.C.reaa. All the jets not in the air were parked at the end of the flight line – 28 jet fighters, wing-tip to wing-tip. Each were loaded with 1,000 gal. of jet fuel – right outside of the Operations building. Every jet had to be ready to take off at a moments notice. All the jets carried air to air missiles, several rockets, and side-winders as well. The nose of each jet was pointed in the direction of the base hospital. On September 11, 1958, the F-102 next to Opa’s caught on fire. The pilot was in the cockpit and had just started up the engine. The crew chief of the jet froze, along with the pilot. Opa seeing the fire took off running for the huge fire extinguisher across the flight line – kicking the crew chief as he passed him – he yelled, “ Get the pilot to shut down the engine and get out of that plane!” On returning with the fire extinguisher, Opa aimed it in the bay door and tried to put the fire out but couldn’t – it was getting air from the bay door on the other side of the plane that was open. Taking out his screw driver from his back pocket he closed the one side and ran around to the other side of the plane dragging the extinguisher to put out the fire. When the inspectors examined the plane they told Opa that he had had only a few seconds more before the fire would have reached the fuel tank and exploded. After it was all over everyone came up to congratulate Opa. The Squadron Commander was one of the first to do so. He and several other officers had watched from the windows of the Operations Building – knowing that if the plan blew up it would not only take the other jets with it – but also destroy the Operations Building along with the flight line. The way the jets were facing the base hospital it would have sent the rockets and missiles straight into that building as well – destroying most – if not all – of the hospital.

Opa and Oma on their 45th wedding anniversary Opa and Oma met at a Missouri State Society Dance in October 1956 and married in August of the following year. We both have a very strong faith in God, and believe that faith with a lot of prayer has carried us both through out our life time. Opa and his family were able to make it safely through WW11, and afterward. Many families died even after the war, of starvation. His story tells you just how many times they were so close to death. Each member of Opa’s family survived without injury of any kind – and we both believe that God was with them, keeping them safe.