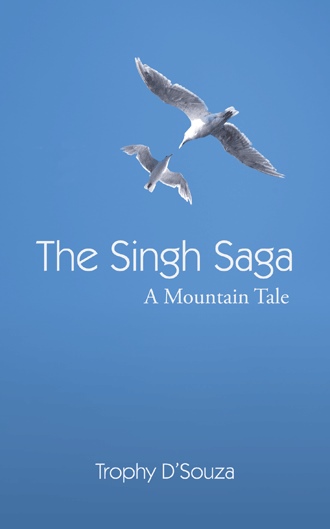 When Billu and Chula first met they were college mates. When their first two children came along, both girls, in the little mountain town, Soonadah, they were struggling to cope. When Billu’s contractual work took him away for days at his projects, their marriage ties were at breaking point. When Chula and the two children moved to the bigger town, Kurseong, the couple showed signs of drifting apart. When Billu didn’t turn up to see Chula and the family the gossipers knew that a new ‘Miss-Understanding’ was in ‘interference mode’. It was not long now before the couple would have to change ‘fly paths’, so as not to destruct. Chula’s life was easier in Kurseong, where Billu’s parents had settled earlier, except that Billu’s unpredictable behaviour gave cause for concern. Their third child did little to ease the growing tensions between the two. Either Billu’s frustration or his passion allowed Sudha to take centre stage. She not only got Chula out the way, she charmed Billu and the elders so that she could rule the roost. Sudha, the street-wise rustic dhobi-girl nearly sealed the complete deal when she had a child, Ponda, with Billu. Ponda, with her profligate lifestyle, turned out to be a loose cannon causing mayhem in Kurseong and nearly rocking the boat. Quite unexpectedly events in the Singh Saga suddenly took a U-turn when disaster struck almost tsunami-like with an accident, a terminal illness, a lock-up and more than just a grandee ‘passing away’. By the time normalcy returned the ‘boat’ had moved away from its moorings. The clan was in disarray, but was it in decline? Was it all disaster, or was there some lingering hope? Did the Saga continue? Was there a catalyst?

A dysfunctional family struggles to keep itself together even while some members seem to be drifting away on personal agendas. The senior members of the clan seem powerless as their traditional ways face challenges from new ideas and practices. Meanwhile a shrewd Outsider who marries into the clan uses clever ways to acquire status in the hierarchy to be able to inherit privilege and position for herself and her protégé. The grandees settled in their assured positions do not pick up on these clever moves. So, could fate or nature step in to play a significant role in the Singh Saga? The vibrant flow of language and the intriguing plot hold the reader’s attention as the Mountain Tale unravels.