The Origin Of Our Rituals

A Question And Answer Guide To Rediscovering Our Catholic Heritage 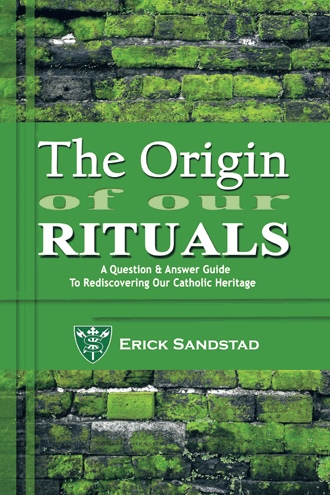 WHY DO We Pray The Rosary? In 311 AD, St Anthony of Egypt, moved to the desert to become the first monk to pray in solitude. There, he prayed 52 Our Fathers per day. To make it easy to count prayers, he tied 52 knots around a rope, which came to be known as the Chotki. A story tell us that St Anthony was praying in the desert while the devil kept untying the knots on his Chotki, and St Anthony became upset. The Blessed Mother appeared and asked the saint to make a cross from the same rope so the devil would stay away. By 431 AD, devotion to the Blessed Mother became strong when the Church declared her the Mother of God. 283 Later in the 553 AD she was declared ever Virgin. During the 8th Century, all monks at the Monastery of Cluny in France used the Chotki rope though they called it in Latin, “Paternoster” since they used it to count the Lord's Prayer. It was in the 1100 AD when the Church composed a prayer from the Gospel of St Luke known as the Hail Mary that soon the Chotki or Paternoster beads were used to count Hail Marys. In 1214 AD, the Blessed Mother appeared and asked St Dominic to promote the praying of 50 to 150 Hail Marys that came to be known as Mary’s Rose Garden or Rosary Prayer. By the 1489 AD, the 15 decades of Hail Marys separated by 15 Our Fathers had become known as Mysteries.

THE AUTHOR’S INTERWOVEN DESCRIPTIONS OF HISTORIC DATA PROVIDE A SENSE OF THE IMPORTANT ROLE THAT RITUALS HAVE PLAYED IN THE EVERYDAY LIFE OF CHRISTIANS FOR THE PAST TWO MILLENNIA. THROUGH CONCISE AND CANDID ACCOUNTS ACCOMPANIED WITH A DEEP UNDERSTANDING OF THE FAITH, SANDSTAD INVITES US ALL TO BECOME PASSIONATE ABOUT WHAT WE BELIEVE AND PRACTICE IN ORDER TO CHERISH, TRANSMIT AND RADIATE THE BEAUTY OF THE CATHOLIC HERITAGE. “What earlier generations held as sacred, remains sacred and great for us too, and it cannot be all of a sudden entirely forbidden or even considered harmful. It behooves all of us to preserve the riches which have developed in the Church’s faith and prayer, and to give them their proper place.” -Pope Benedict XVI- Vatican City

ERICK SANDSTAD also known by many as former Brother Erick, studied in Rome at the Pontifical University Regina Apostolorum where he acquired a Licentiate Degree in Philosophy. He was a Religious Brother for 14 years residing in Salamanca Spain, Hamden, Connecticut and Rome Italy. He holds a Masters Degree in Psychology from Northeastern University in Boston. Erick when not writing, or speaking at events he is raising capital for church property acquisitions or supporting a Diocese with their vocation efforts. He resides in Lexington, Kentucky.