Alzheimer's & Dementia: Through the Looking Glass 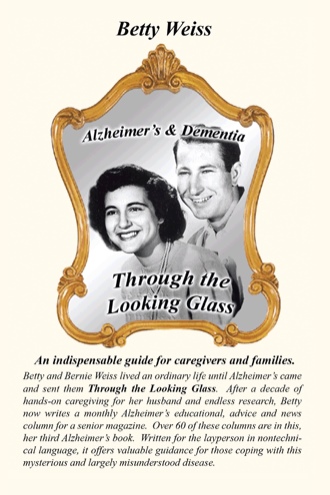 On November 26th, 1901, Dr. Alois Alzheimer described the symptoms he observed during an interview with his first patient, 51 year-old Frau Auguste Deter. Five years later he biopsied her brain, presented a report on his findings to a conference of German psychiatrists and eventually the disease came to bear his name. “She sits on the bed with a helpless expression. What is your name? Auguste. What is your husband's name? Auguste. Your husband? Ah, my husband. She looks as if she didn't understand the question. Are you married? To Auguste. Mrs D? Yes, yes, Auguste D. How long have you been here? She seems to be trying to remember. Three weeks. What is this? I show her a pencil. A pen. A purse, key, diary and cigar are identified correctly. At lunch she eats cauliflower and pork. Asked what she is eating she answers spinach. When she was chewing meat and asked what she was doing, she answered potatoes and horseradish. When objects are shown to her, she does not remember after a short time which objects have been shown. ”Everyone with Alzheimer's develops dementia; not everyone with dementia has Alzheimer's. Few things are more confusing than trying to clarify the difference between DEMENTIA and ALZHEIMER'S, but there is a clear distinction. A doctor might give a diagnosis of `dementia but not Alzheimer's,' or maybe just ‘Alzheimer's' and not mention dementia, or `dementia of the Alzheimer's type,' or just `dementia', or `probable Alzheimer's' --isn't it one thing or the other? You want to know--what is it! But it's not always clear because these conditions can overlap and be so vague that even a doctor can’t always know for sure. What Is Dementia? Dementia is a symptom that something is affecting the normal functions of the brain; it is not an illness or a disease in itself. Think of dementia as you would a fever. The doctor says that you have a fever--a symptom that something is wrong in your body. What is causing the fever? Is it a sore throat? Your appendix? Is it an infection, and where is the infection? Do you have the flu? It is easy to recognize a fever. The patient is warm to the touch, doesn't feel too well and a thermometer will clearly show how the patient's temperature varies from normal. We learn early on in life how to recognize a fever, but how do we recognize dementia? The doctor says that you have dementia. Dementia is a collection of unusual behaviors that someone exhibits; an indication that physical changes have occurred in the brain. There may be trouble with language, memory loss, poor judgment, repeating things, getting lost in familiar places, inability to follow directions, unable to do simple everyday living tasks, trouble managing money; hallucinations and delusions; mood swings, agitation, hostility, combativeness; disorientation of time, people and place; neglecting safety, hygiene, and nutrition. What is causing the dementia? These abnormal behaviors, and more, collectively known as dementia, create difficult problems in the home and at work. Colleagues and family get angry, they think it's being done on purpose just to annoy someone, but, no, that's not the case. Sufferers really cannot help it anymore than they can help getting a fever from an infected wound. Few think the behavior is being caused by a brain disease or other medical condition, especially since the subject often looks and acts so normal. Finding The Cause Of Dementia Hopefully, when these things occur, someone will suggest visiting a doctor. Then it is up to the doctor to find out what is causing the dementia, the odd behaviors, just as he would have to find out what causes a fever. There would be a physical examination, blood and urine tests, he’ll check coordination, balance, eye movement, speech, maybe order a brain scan. He’ll give the patient a little verbal memory test and interview family members. All patient’s prescriptions and dosages, over-the-counter drugs, vitamins and supplements will be looked at. (Note: If you are going to the doctor with a loved one, remember that the patient has a memory problem and it is up to you to make certain that all such items are accurate and included.) There are about 50 different causes of dementia, many very rare. Because some dementias are reversible, it is critical to locate the cause as soon as possible so that treatment can begin early, and since the doctor is looking for the cause, his examination should be very thorough so as not to miss one of the reversible ones. By far, the most common cause of dementia is Alzheimer’s disease—more or less about 60% and it is not reversible. Alzheimer's Disease Alzheimer's is the most common cause of dementia in people over 65 and affects approximately 50% of those over 85. It can and also does occur in those much younger. Currently researchers do not know exactly what causes it, there is no known prevention, no cure and it is terminal. Because symptoms and illness duration vary greatly from person to person, Lisa P. Gwyther, MSW, has famously said: “When you've seen one person with Alzheimer's disease, you've seen ONE person with Alzheimer's disease.” In spite all that has been written about Alzheimer's, it still remains one of the all-time mystery maladies. If you want to study and learn about the technical information known about it throughout the medical community, there are thousands of websites and libraries full of books to research. This book, however, is designed to give those suddenly thrust into the world of Alzheimer's a simple, general, accurate, fast-track, non-scientific, non-medical, non-technical overall layman's view of the disease. Hopefully it will erase the misinformation that too many believe and help them to better understand the reality of what they are dealing with. 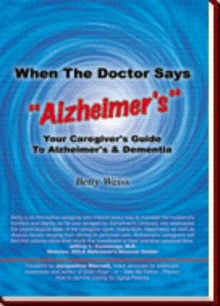 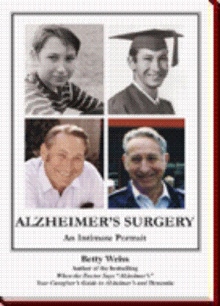 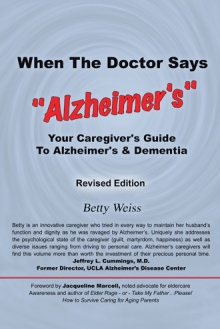 “Alzheimer’s & Dementia: Through the Looking Glass,” explains in easy to understand nontechnical language the difference between Alzheimer’s and dementia; discusses issues like driving, hallucinations, delusions, bathing, respite, feeding tubes, hospice, guilt, sexuality, genetics, aging, warning signs, placement or home care, diagnosis, hospice, finding help, emotions and more. Sixty-six columns, and more, from the highly regarded All About Alzheimer’s feature written by the author and published monthly in Today’s Senior Magazine are assembled here to help the family and caregiver through the demanding trials of living with someone who has Alzheimer’s. Few things are as frustrating and maddening as Alzheimer’s and caring for someone with the disease is uniquely different from other medical conditions. In time, the patient is unable to help in his own care, even to follow such simple instructions as ‘stand up’ or ‘sit down,’ creating a difficult situation for everyone. Perhaps you think when someone forgets, you just remind them; no one forgets their own children, how to eat, dress and use the bathroom! But they do! In this book you will learn the difference between your forgetting a word and remembering it later and the Alzheimer’s patient who forgets but cannot remember later because the memory is not just momentarily forgotten—it no longer exists! If it does not exist, it cannot be recalled. You’ll learn things you need to know that will seem counterintuitive and require changes in your normal responses. They are not always easy to use, but they can make life with this disease a bit easier for both the afflicted individuals and those who care for and love them. You will come to understand the basics of the illness, why such bizarre things happen, and how to react to unexpected and on-going problems without making things worse.

Betty Weiss began writing about the time she learned to hold a pencil. Her first little story in grade school was “Icebox Cookie,” about a puppy named Cookie caught in the refrigerator; Cookie was saved, all ended well. Then she wrote about a pot of homemade ink exploding on the stove—that did not end so well. She continued writing for school newspapers and student anthologies: if she joined an organization she was soon doing their bulletins and newsletters, for several years she did publicity for little theatre and other groups. All along she’d write personal stories and articles published in the Los Angeles Times as well as other newspapers and magazines and often picked up by different publications including Reader’s Digest. When her husband and childhood sweetheart developed Alzheimer’s she began keeping a journal that turned into “When the Doctor Says, Alzheimer’s: Your Caregivers Guide to Alzheimer’s & Dementia,” (and its Revised Edition). The book has become a treasured tool and reference helping those dealing with this misunderstood illness, explaining its endless bizarre symptoms, how best to deal with them, and where to find help. Her second book, "Alzheimer's Surgery: An Intimate Portrait," relates her childhood romance with her husband and their normal married life until he develops Alzheimer’s and their world shatters. For over five years she has written the popular monthly “All About Alzheimer’s” information feature for “Today’s Senior Magazine.” Over sixty of these columns are compiled into her third book, “Alzheimer’s & Dementia: Through the Looking Glass.” Weiss has a self-imposed mission to teach the general public the true facts about Alzheimer's, to dispel much of the misinformation and stigma that comes with this mysterious disease. She continues to live in the same Los Angeles home where she and her husband raised their children.