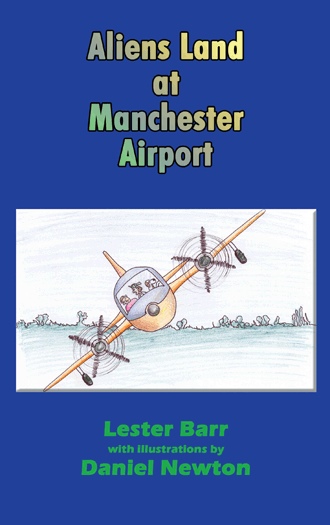 THE STORY - Chapter One. Dobber climbed on to the roof of his garden shed. Just like King Kong climbing to the top of a skyscraper to check out his surroundings. Or the Lion King scrambling up to a favourite rock to survey his territory. There was nowhere in the whole wide world that Dobber loved more than the top of that garden shed. Now before you get the idea that there was something strange about Dobber, let me tell you this. He lived in a place called Moss Nook right beside Manchester Airport. And his father was an electrician who looked after the runway lights. That garden shed was smack bang below the flight path for Runway Two. Dobber could hear a plane coming in to land. It looked like a Boeing 737. He stood up as tall as he could on that shed roof, and from there he could just make out the faces of the pilots as they came in to land. There was a feint smell of exhaust fumes after it passed overhead. At this time of day there was a flight every 5 minutes. The next plane came into view right on time. “Yes!” thought Dobber. “It’s a Turbo-prop”. This smaller aircraft came in lower and slower than the big ones and so he could play his favourite game. He stared in through the aircraft windows as it drew level and pulled a strange face at one of the passengers who happened to be looking out at the time. A sort of “ - - agghh! I can’t breathe! Help me! I’m choking - -” kind of a face. He didn’t often get any reaction, but today he got a wave. His real name was Robin Robinson. He’d always been a bit embarrassed by his name, and much preferred Dobber: - so even his dad and his sister called him by his nickname. Our story begins on an April evening after supper. Dobber had sneaked out of the house to sit on the shed just as it was getting dark. This was the best time to watch planes: after dark. As each jet approached a strong headlight would light up his garden shed, and he would then watch the flashing lights on the wing tips and tail fin slowly disappear over his garden fence and down on to the runway. The night was warm, the sky unusually clear. As he stared upwards his thoughts began to wander around the Universe above him. Dreamily he stared at one particularly bright cluster of stars. “I wonder if there’s life up there somewhere”. He had a feeling that there must be something else beyond his own planet. Somehow he knew that the Universe must contain much more than the familiar things around him on earth. “There must be life somewhere among all those stars and planets above.” “Hello.. hello .... come in planet Zog ... can you hear me?” There was no answer. But what Dobber didn’t know was this. Exactly at that moment in time, from that star cluster deep in space, each equally unaware of one another’s existence, another Life Form was gazing towards Dobber on planet earth. The OPTIONAL EXTRA chapter! “The Science Behind The Story” This chapter is written for the benefit of those who, like me, are fed being told that the discoveries of science mean that there can’t possibly be a God. You know the kind of argument: “If God is so intelligent, then why are there so many design faults and mutations in our genes?” or “Look at evolution and ‘survival of the fittest’ – all the suffering and waste – that doesn’t sound much like a loving God”. This chapter explains why it is OK to believe that the Universe started as a Big Bang 14 billion years ago, that life on earth evolved from lowly beginnings 3 ½ billion years ago, and that genetic transfer, drift and mutation and natural selection are all part of the process – and still have good reasons to believe that an intelligent and loving God is behind it all. The world in which we live is full of such colour and beauty and movement and vibrant life that it is good to question how we got here. Are we the end product of blind purposeless chance? Or are we here for a reason?

This is a story about an alien who stumbles on planet Earth and gets lost at Manchester Airport. Then there is a twist at the end. It has an optional extra chapter—“The Science Behind the Story”. This asks questions like, Could intelligent life forms evolve on planets other than our own? Could they travel through time? Do the discoveries of science mean that there can’t possibly be a God? This book can be enjoyed at two levels: as a children’s story and as a thoughtful but light-hearted contribution to the debate around science, atheism, and faith. We hope you enjoy them both.

Lester Barr and Daniel Newton both live near Manchester Airport in England. Lester is a surgeon and cancer specialist at the University Hospital of South Manchester and Christie Hospital, Manchester. His research interest is breast cancer prevention and cancer genetics. He has a particular interest in the relationship between science, atheism, and faith and hopes that this book will be a thoughtful but light-hearted contribution to that debate. The story is original, but the science, philosophy, and theological thinking contained in the optional extra chapter at the end are influenced by the following scientists, whose works the author would recommend to anyone who wishes to study the issues in more depth: Denis Alexander, John Avise, Sam Berry, Francis Collins, Simon Conway-Morris, Darrell Falk, Keith Fox, Stephen Meyer, and John Polkinghorne. The author’s ideas also were influenced by the following theologians: John Haught, Alastair McGrath, and Keith Ward. Royalties from the sale of this book will go to the Genesis Breast Cancer Prevention Appeal.