Key to the ancient world of Thar Cernunnos 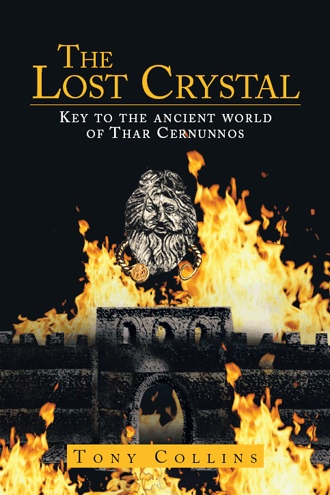 Once again in full control of his faculties, Simon cautiously lead the others out of the small fenced compound, he checked his bearings and took a rapid note of his location. He could see very little of what was going on outside the market place, but clearly fires were burning all the way back to the west gate, and the sounds of battle made it clear that the situation was changing rapidly. But of more concern was the state of affairs in his immediate surroundings. The heat from the inferno in the public baths was intense, the timber upper storey had collapsed along with the rear wall which had fallen in on itself, and this had been responsible for his near disaster. The shops in the precinct were now a circle of fire and the gap between the end shop and the Basilica was effectively blocked by the conflagration. Realizing their only way out was by the north gate, he led the others around the front of the baths passing the once grand entrance where the timber columns were burning like giant matchsticks. Opposite the Concillium a group of Christian priests stopped them in their tracks. With their hands raised above their heads they broadcast their grim message. ‘Only the righteous are in the hands of God’ they shouted, ‘Fear not them which kill the body and are not able to kill the soul.’ Simon quickly side stepped, leaving them to continue their chanting. Running along the road which led through the administrative quarter to the north gate, their going was hindered by large numbers of people clogging the narrow streets. Most were making the same desperate bid to reach the northern exit, but others were pushing carts laden with goods plundered from the Governor’s residence. One had a very fine marble bust of the Emperor Theodosius perched precariously on the edge of his fruit barrow, until it tipped over. He fought desperately to right it, heaving at the handles of his lopsided barrow, but the Emperor tumbled off and the marble head sheared from the bust then rolled down the road. They finally reached the north gate to find they were vastly outnumbered by the crowds who had already gathered there. They were told the gates were locked and despite people’s efforts to open them, they were clearly not going to budge. Even the small Judas door was refusing all attempts to lever it off its hinges. Several youngsters clambered up the ledges and braces attempting to scale the twenty foot high gates, but one after the other they lost their foothold, and fell onto the crowds below. A sudden rain of arrows descended upon them and panic erupted as people rushed to find shelter in nearby buildings, but several were felled as they made a bid to flee. Simon nodded to the others and they raced off in the direction of the tax offices. The situation here was similar with crowds of people and he witnessed even more crazy attempts to escape. A dozen or more had climbed on to the administration building and were attempting to jump the fifteen foot gap between the building and the town wall. Some reached the wall but bounced off the hard masonry breaking arms and legs before slithering to the ground. Further waves of arrows rained down on them. Simon knew it was time to make a new bid to escape, there was only one direction left and that was east. With Sen’icca and Iracni in tow, he retraced his steps to the market place. Within that short period since he was last there, circumstances had changed dramatically. Enormous spiralling flames lit up the inside of the Basilica and from the roof of the Concillium flares vented from the eaves. To his right the entire western section of the town was curtained off by an impenetrable inferno, a heavy black smoke hung low within the town walls forming a suffocating blanket of death. People dashed in every direction suddenly galvanized by the aerial bombardment, but confused by the options left to them. They continued in earnest, flaming timbers continually falling in their path. A loud sizzling sound nearby as another tree became engulfed in flames. Then a loud crash as a massive section of the elevated theatre auditorium collapsed onto the street. Their way ahead was blocked. Silvianus and his men were in close combat with Himundus’ mighty army. They had engaged the Saxons on the open ground where the Peregrini quarter had once been, and although outnumbered, they had charged the Saxons several times to good effect. Their tactics had so far worked well, Silvianus had employed the strategy of denying the enemy the chance to rally or regroup. However, wave upon wave of Saxons were now pouring through the west gate and in such vast numbers that Silvianus’ men could no longer regroup. First his left wing lost formation and now his right wing floundered. This was critical because it included his headquarters unit, the mobile position from where he controlled the fighting. The battle was no longer a contest between armies, but a conflict between individuals fighting hand to hand and without command or direction, so it was now all down to individual strength and skill Silvianus weighed up the options. They were trapped in a triangular battleground with their backs against the southern town wall. To his right, every thatched house along the eastern road was burning, presenting an impenetrable wall of fire. In front as far as he could see, a seething mass of axes and swords glinting in the sun, Silvianus’ men were brave and he knew it, but the Saxon war machine was a terrifying foe, and far larger than anyone had thought possible. He faced the Saxon army and proclaimed ‘Nos morituri te salutamus’ - we who are about to die, salute you. He ordered his men to move forward and Silvianus lead a brazen charge through the middle of the Saxon ranks.

An archaeological dig in the English countryside might be considered the safest of pastimes, but not for Simon Tappins. His life is turned upside down when a dramatic discovery sends him back two thousand years into a world time forgot. He is plunged into a dangerous period of British history, a pivotal point when the Roman Empire is collapsing and Saxon hordes are invading, sweeping aside the last legions. Simon is caught between the approaching Saxons and the ferocious but futile last stand of a Roman governor who, with the support of Germanic mercenaries, is intent on escaping with the wealth he has accumulated. Through all this runs Simon’s quest to solve a mystery. Only the lost crystal of Thar Cernunnos has the power to take him back to his own time, but while clues crop up regularly, they are always enigmatic, often cryptic, and seemingly impossible to solve. However, it is his emotional involvement with native girl Sen’icca that presents the greatest challenge. If he makes the wrong decision now, in two thousand years’ time, the consequences will be fatal. In accurate and fascinating detail many aspects of everyday life in these times are disclosed. The story explores what it was really like to live in a Roman town. The principal character experiences the sounds of the market place, the smells from the wine bars and food shops, and the choking smoke from the industrial quarter. But it is the people and their cultural and political organization which reveals the unique economic ambience of the town during this dangerous period. The story also weaves a strange tale of unearthly powers of priests, the terrifying predictions of Celtic Gods and the struggles, perils and small triumphs of surviving in a time filled with savage conflict.

Tony Collins was born in London and studied archaeology at Cambridge. He excavated numerous archaeological sites in North West Essex and South Cambridgeshire, but was particularly inspired by the once-important Roman town at Great Chesterford where this, his first novel, is set. He recently retired and moved to Normandy France, where he is currently working on a second novel—this time with a local twist.