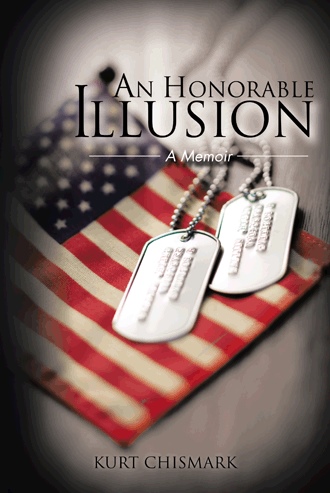 An Honorable Illusion-A Memoir, is a powerful story about a young man's one-year journey into manhood as a U.S. Army officer in combat in Vietnam in 1970. Kurt Michael Chismark was the product of a middle class, conservative, Catholic family from Syracuse, New York -- patriotic, religious, hardworking, and idealistic. After graduating from an Ivy League school when the Vietnam War was at its peak, he enlisted in the Army and earned his commission as a 2nd Lieutenant. After Airborne and Special Forces training, he was surprisingly assigned to the infamous 173rd Airborne Brigade to be a platoon leader, replacing one who had just been killed. He led “search and destroy” missions to “engage the enemy and free the Vietnamese people from communism.” His platoon trekked tirelessly through mountainous jungles, and later through populated hamlets and villages. Regularly, they patrolled through lethal minefields, hunting and being hunted by a determined Viet Cong enemy that was aided by a hostile populace. His haunting accounts are as intriguing, thought provoking, and relevant today as they were back then. Relive his journey to manhood that changed him forever --a journey of ambiguity, confusion, guilt, and sorrow; as well as one of courage, faith, love, and honor.

Kurt Michael Chismark, has worked for the past decade as Executive Director of two member organizations of Catholic Charities of Sacramento. He is a “Leadership Fellow” of the Sierra Health Foundation Health Leadership Program and an Outpost Leader for Point Man International Ministries, a Christian faith-based “Veterans helping Veterans” group that provides fellowship, mutual support, and spiritual counseling for combat veterans and their families. He also serves on the Board of Directors of “Welcome Home Vets,” a Nevada County, CA non-profit organization that provides psychological services, education and advocacy for those with military-related trauma. Prior to serving in the non-profit sector, Mr.Chismark worked in the corporate world for thirty years. He was CEO of a small technology company, and prior to that held a variety of senior sales and marketing management positions throughout the United States with consumer products companies including TDK, Apple, Polaroid, and Carnation. He was an Adjunct Professor at Sierra College and the University of Phoenix, where he taught undergraduate classes in Marketing and Sociology. He served in the U.S. Army with the 6th Special Forces Group (Airborne), and commanded troops in combat in Vietnam with the 173rd Airborne Brigade, for which he was awarded three Bronze Star Medals and The Air Medal. He achieved the rank of Captain. Mr. Chismark holds a Bachelor of Science degree from Cornell University and a Masters of Business Administration degree from Georgia State University. He currently lives in Nevada City, California with his wife of forty-two years, Elizabeth. They have adult twin daughters and five grandchildren.