THISTLES IN THE CORN 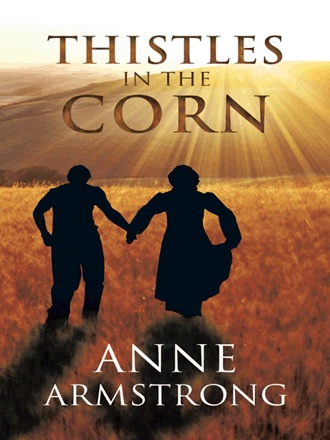 "I reckon as we be due a bit o' fine weather," persisted Will. "There can't be much more wet left up there." He tipped his head back and squinted up into a clear sky where not even the slightest wisp of cloud was visible. " 'T aint goin' to rain today, at any rate," he stated. "P'raps not. But that don' mean as it won't rain tomorrow ... or the day a'ter ... Still, whatever it does, us'll have to put up wi' it, as us allus has to. You'd think that them parsons could say a few prayers or summat ... But nothin' makes any diff'rence to the nature o' things," the farmer said. "I s'pose some folks 'd think it looks pretty ... with all them diff'rent colours , all mixed up like that," ventured Will, keen to find something positive to say. "It do look like that patchwork quilt the missus be makin', don't it?" "Pretty! Huh!" snorted the farmer. "Pretty! Don' you go thinkin' along those lines, my lad. That aint no way fer a farmer to talk. That be the way that wimmen do talk, as knows no better. Pretty! Huh!" Will blushed. "But it do look like that quilt ..." he began; but he was interrupted by the farmer. "Now, now, my lad. You mustn't start thinkin' such rubbish. Weeds be weeds an' it be the nature o' weeds to be a blasted nuisance. Weeds aint meant to be pretty. That be the way things be ... Oh, I knows wimmen gets silly notions about 'em. 'O jest look at them beautiful, lovely muck-weeds. I must have a bunch of 'em fer me winder-sill,' they says ... An' the Missus, she were jest as bad. 'O Ephraim,' her says, 'Can 'ee pick me some o' they pretty yeller flowers? They be jest the thing fer that big green jug on the side,' her says ... An' d'you know, they yeller flowers as her'd got her eyes on, they was only blasted ragwort. Ragwort!" The farmer suddenly let out a guffaw. "Ragwort! You'd 've thought as my Dolly 'd 've known what ragwort was ... one of the wust weeds of all the blasted lot! But her were jest the same as all the rest of them daft wimmen as is fooled by a pretty colour. Ah ... Ragwort!" A smile lingered on the farmer's face as he recalled fond memories of his early married life. Will smiled too. He was relieved to see that the farmer's mood had lightened. "Ah. The Missus, she were jest the same. I had to eddicate her ... tell her what was weeds was weeds ... not flowers ... tell her not to pick 'em an' put 'em in jars in the house. It don't do to let weeds think as they be like flowers. She got plenty o' flowers in the garden. What do she want wi' poppies an' the like?" the farmer continued. "But I s'pose the trouble be that weeds can be weeds, but some of 'em be pretty as well ... like flowers," ventured Will. "Be you tryin' to make me laugh or cry?" The farmer was laughing. "I tell 'ee, weeds be weeds. That be all there be to it. It be the nature o' things. There aint no goin' against it." There were a few minutes of silence as the pair considered the place of weeds in the nature of things. Will spat out the remnants of chewed-up grain and began picking at his teeth. The farmer was still scowling at the rampant weeds. "In all my years, I aint never seen a field wi'out some weeds," he remarked. "You expects some weeds ... but ... blimey ..." His voice trailed away. "Wouldn' the field look well with no weeds at all? If it were jest one smooth patch o' corn; no poppies; no docks; no ragwort; no thistles ... jest ears an' ears o' corn, an' nothin' to spoil it?" mused Will. The farmer shook his head. "Life aint like that, lad. Life be full o' weeds. You never gets a field wi' out a weed ..." He sighed. " And you never gets a life wi' out a few disappointments. That be the nature o' things. There be allus summat as'll come along to spoil things... whether it be yer fields ... or yer plans ... Allus summat... It be the nature o' things... That's why you was an orphan an' reared in that Poor House ... It were the nature o' things." "An' I s'pose it were the nature o'things as I should end up here, along of you an' the Missus," Will joined in with the farmer's train of thought. The farmer sighed. "Ah. I s'pose it were. An' if 'n' it were, it aint no good to go against what were meant to be," he said. The pair fell silent again.

When, in May 1835, the orphaned Will Smythe is sent from the Poor House to live and work at Stower Farm, it looks as if there could be a rosy future ahead of him. Elderly Farmer and Missus Stower are childless; and local folk speculate that Will may inherit the farm, one day. These imagined future prospects encourage the impoverished Wyles family to plan for the improvement of their own situation through the marriage of Will to Betsy Wyles, the youngest of Widow Wyles' daughters. All seems to go according to plan, until - as the farmer predicts - the inevitable disappointments and trials of life spoil the picture, in the same way that thistles, and other weeds, spoil a field of corn. This is the story of Will and Betsy's struggle against the thistles in the corn. They discover that there is no escape from Fate: what the farmer calls "the nature of things". Can it really be possible that an impoverished orphan boy and the daughter of a harlot will achieve the status of being Farmer and Mrs Smythe of Stower Farm?

Anne Armstrong was born on a farm in Berkshire (England). She has lived in Berkshire villages all her life, except for three years while studying for her teaching qualifications. Her family spoke in Berkshire dialect. When she went to Grammar School in the 1950s, she had to learn to speak and write standard English grammar - a task akin to learning a foreign language! However, she is happy that her voice still carries something of the 'old' accent. She taught in primary schools until she took a break to bring up her sons; then resumed her teaching career in a college of Further Education, where her students could be any age from sixteen upwards. She has a long-standing interest in history and genealogy and has consulted and transcribed baptismal, marriage and burial records from Parish Registers for various villages in Berkshire, Wiltshire, Oxfordshire and Hampshire. This has given her an appreciation of the high points and low points of rural life from the mid- sixteenth century up to the present day. While researching her family tree, she was not surprised to discover that she is descended from a long line of agricultural labourers on both sides of her family. Their achievements amounted to nothing more than the successful rearing of their large families and survival in difficult conditions. Her writing reflects her appreciation of their struggles.