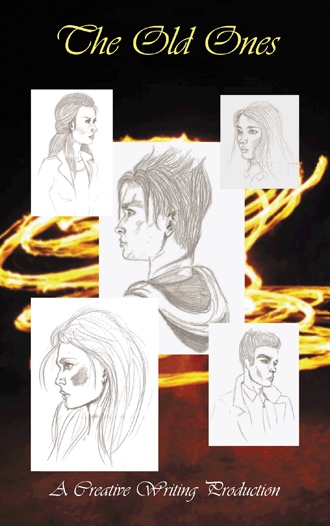 Alex turned to Charlie. “You're not serious!” he cried, exploding, “We are not going anywhere! They’re mad! I only came in here with them because they were going to reveal that I’m a-” “Alex, of course they’re mad!” cried Charlie, in a voice that did not soothe, “That’s the point! They’re probably on drugs; ya know what some of them ‘round here are like. Anyway, even if we do go with them, who knows this place better than us? We know more back alleys than you can find in Venice! Listen-two days out there with them nutcases, and they’ll wander off into their own little world. It’s either that or the police! And it’s not like we’ll ever get away from them, after all the things we’ve done. We’re the most wanted this side of Aberdeen. Which do you choose?” Alex grimaced. He really wasn’t keen on it. Not often did he have the feeling of unease, but now it stole over him, like an invisible cape. It seemed he really didn’t have a choice,not if Charlie was going with it. In a lockup there was no way out for him. If he turned...he shuddered. It would be chaos. God only knew what would happen. He could imagine all sorts of little enquiries, tests and probes. Maybe an autopsy. He dreaded to think. “It’s nothing.” said Charlie, turning back to his beer. “They’re nutters. They won’t be back.” How very wrong he was.

Four complete strangers who have never met-a one from Russian, America, Scotland, and England must unwillingly join forces if they wish to save all they know from the clutches of their arch nemisis-the evil 'Mr X'. Yet each hides a secret, a fear so powerful that it threatens to destroy not only their friendship, but the whole world around them. Who will be found out first? Set in the unyielding Scottish Grampians, two eager confederates, one sulky teenager, and one not-so-willing theif must find, and save, the link that opens up a whole new world. Their aim? To get there quick...before something gets them...

This story is the first of a group effort, written by a total of six final hands. Out of the six writers-Sam, Ben, Toby, Nick, Becky, and Philippa, three are known dyslexics. However, this does not stop their passion. It does not stop their wild imagination, and fascinating knowledge that pours out on a Thursday night onto a small table, tucked between the English and Maths rooms of a small country high school. Nor does it stop them from dreaming throughout the week, or prevent them sharing startling new knowledge with their co-workers; opening a fascinating new world that many knew little about... We all have a passion for writing. In fact, we've all been writing for most of our lives. I myself have achieved an A* in English language and Literature at A level, our co-author, Samantha, also achieving an A. She herself has also won poetry competitions within school, and I had my first poem published in a Young Writers Poetry Competition volume; Once Upon A Rhyme, when just eleven. Of course, writing should be based on true life, and all it has to offer. For myself, I enjoy being part of St Mary's And St Chad's Bellringers, which certainly diversifies the characters I see. I also play an active part in St John Ambulance, a first aid group, which certainly helps when writing drama. We all enjoy being involved in life, and all authors are now in higher education at University or College level. With regards to our novel, for each of us there was a role. Ben and Becky store between them a mine of knowledge on alternate worlds, and the dark and mysterious myths behind them. Sam has the film aspect; what has been seen before, and suggested ideas for when we got truly stuck. Nick was part of the original four-a rock in the after-school writing group. When he left for college, I rejoined as did Toby, aiding and assisting with ideas that blew each other away. We believe that many heads are better than one, and where better to put our knowledge than into writing for other young teens? Philippa Wheatley. Writers and Authors from Years 10 and 11: Samantha Bill (Y11) Philippa Wheatley (Y11) Nicholas Vaughan (Y11) Rebekah Jones (Y10) Benjamin Watkins (Y10) Toby Collier (Y10)