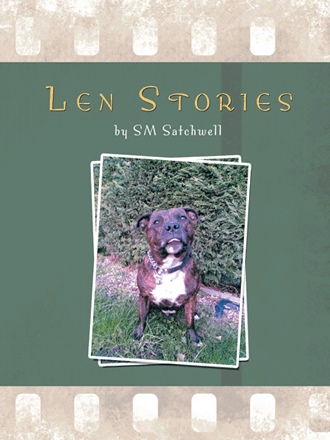 Meet Len, a Staffordshire bull terrier. Don’t believe the horror stories pumped out by the media – Staffords are one of the best breeds. Just ask the person who has one. Or two. Len was born in 2006 and joined the Satchwell house in 2008 after their previous dog was put to sleep. Since then, Len has been many places and made many friends – and made a few people change their opinion on his breed. This book contains stories about Len. Places he’s been, things he’s done, people he’s met. His life isn’t just about eating and playing; it’s going places, meeting people, doing things other dogs may not do. This isn’t just another “we get a naughty dog that gets in trouble a lot then dies in the end” book; Len Stories, written and published whilst Len is just six-years-old, contains short stories which can be read in any order. Len’s interests are playing, walking, and being close to the people he loves. Although he’s sleeping right now – as this is being written – he’s a very active dog who likes nothing more than chasing a ball. Unless it’s raining! Len is a pet. He may be just another Staffordshire bull terrier who was saved by rescue, but in a very short time he became a much-loved pet. This book contains just a few stories – and as he’s just six-years-old, there’ll be years of stories ahead. Len originally lived with two people, but now shares his home with a budgie, and his garden with two Pekin bantams hens. Staffordshire bull terriers have a bad reputation which is preyed upon by the media and unscrupulous breeders. But this is a loving breed, and hopefully this comes out in the stories within this book. SM Satchwell, April 2012

SM Satchwell was born in West Yorkshire but has lived in Cambridgeshire since she was 4 years old. The first animals in her life were cats, followed by dogs, fish, and rodents. In 2012 came the first birds – two Pekin bantam hens purchased from a garden centre, and a budgerigar which landed in the garden one afternoon. Her interests are reading, writing, collecting foreign and pre-decimal currency, drawing, the Internet, the countryside, and farming the old way. She also likes feeding the wild birds that visit the garden, and has seen the number increase within just a few years. She collects books and reads constantly. She doesn’t really have a favourite author, although the same ones do crop up repeatedly – such as JM Auel, VC Andrews, Catherine Cookson, Nicholas Evans, and Catherine Applegate (in fiction). Her favourite childhood cartoon was The Animals of Farthing Wood – which she still has a very soft spot for. She dislikes popular television, preferring to watch “real reality” such as documentaries, and a few cartoons (The Simpsons, Futurama, Rugrats, Fairly Oddparents). Her DVD collection includes Steptoe & Son, Road Trip, American Pie 1 & 2, Disney animated feature films, and Catherine Cookson adaptations. She lives with her father, Len the Staffordshire bull terrier, Bessie & Ginger the Pekin bantams, and Joey the budgie. Plus the sparrows, starlings, wood pigeons, collared doves… She believes that animals are sentient beings who should have their rights recognised and respected, and regularly donates to animal welfare charities. She has always wanted to write a book, and Len Stories was born when she purchased a packet of notebooks from the Sunday market. It took less than a month to fill one notebook with stories about Len. SM Satchwell’s second book, about the bantams and Joey the budgie, will be published soon.