Thousands of terms, tips and techniques that define the professions 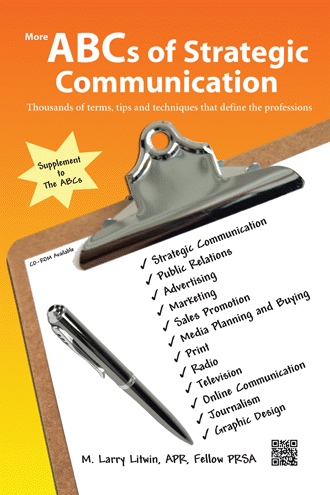 PR is... An objective of The ABCs of Strategic Communication and this supplement is to assist communication practitioners – no matter the discipline – in achieving their goals. To do that, dissect the author’s “informal” definition of public relations: Public relations is as simple as a thank-you note and as complicated as a four-color brochure. It’s as specific as writing a news release and as general as sensing community attitudes. It’s as inexpensive as a phone call to an editor or as costly as a full-page advertisement. It’s as direct as a conversation, text or email between two people and as broad as a radio or television program, or social media, reaching thousands of listeners or millions of viewers. It’s as visual as a poster and as literal as a speech. HERE, MY FRIENDS, IS THE BIG QUESTION: What IS public relations? It is a term often used – seldom defined! In its broadest sense, public relations is “good work, publicly recognized.” Believe me, there are no secret formulas. Public relations is simply: the group itself saying – • “This is who we are • What we think about ourselves • What we want to do – and • Why we deserve your support.” M. Larry Litwin and Ralph Burgio © 1971; © 1999; © 2013 For information, updates and additions, visit: www.larrylitwin.com 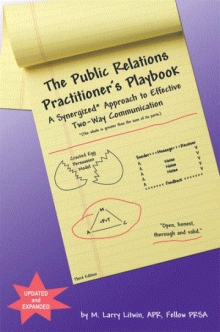 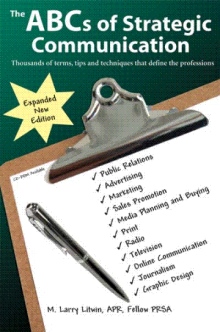 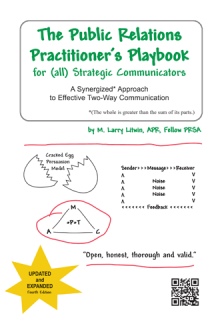 More ABCs of Strategic Communication -- Supplement to The ABCs is a prime example of quintessential teamwork. Like The ABCs, it is the go-to source for marketing and other strategic communication terms. Both ABCs represent the accomplishments of an incredibly talented team of outstanding strategic communication practitioners and counselors led by the commitment and dedication of senior editor Amy Ovsiew. Amy headed a team of nose-to-the-grindstone researchers and persuasive strategic writers and an award-winning graphics specialist. Together, we took a concept, honed it and produced major desk-top (computer) references that reviewers believe are standards for the industry -- the many disciplines that comprise the strategic communication professions. It all began when the first edition's senior editor Katie Hardesty raised the question, “Wouldn't it be great if there were a book of terms all communicators would find valuable?” That “outside-the-box” thinking, which included the unique approach of interspersing relationship marketing terms, tips and techniques throughout, has evolved into The ABCs of Strategic Communication and More ABCs. Like their companion The Public Relations Practitioner's Playbook for (all) Strategic Communicators (AuthorHouse - 2013), The ABCs books are jargon free and jam packed with communication ideas that work. What started as a 48-page booklet has grown to a combined 1,100 pages because the communication professions are so integrated and dependent on one another. The companion CD-ROM contains all of the 282 tips and techniques plus three supplemental strategic communication PowerPoints

M. Larry Litwin, APR, Fellow PRSA, is an established strategic adviser, teacher, mentor, role model and ethicist, and an award-winning public relations counselor and broadcast journalist, who has left a lasting impression on thousands of students and professionals. He spent 42 years at Rowan (N.J.) University before retiring as associate professor to guest lecture at other universities in public relations, advertising, radio and television. His classroom is described as a “laboratory for practical knowledge” where he implements “edutainment” to motivate his students. He is a member of the Public Relations Society of America College of Fellows, recipient of the National School Public Relations Association's Lifetime Professional Achievement Award, Sigma Delta Chi's Bronze Medallion for Distinguished Service in Journalism, the Public Relations Student Society of America's Outstanding Faculty Adviser Award and Rowan's Gary Hunter Excellence in Mentoring Award for “demonstrating exceptional abilities in supporting, encouraging and promoting the development of students' academic, personal and professional growth.” The (original) ABCs of Strategic Communication and More ABCs are collections of 8,000 terms, tips and techniques that define the communication professions. His first book, The Public Relations Practitioner's Playbook for (all) Strategic Communicators is a how-to, hands-on, step-by-step manual - designed to provide both the seasoned professional and novice with a valuable resource containing information, knowledge and skills that can be applied to the day-to-day world.