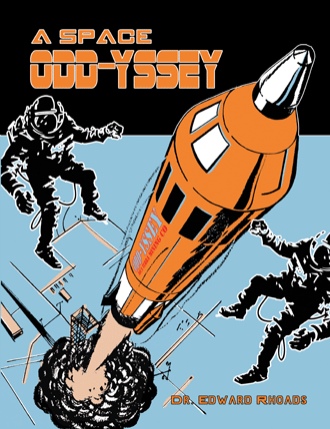 In the cold darkness of space a giant spacecraft slowly made its way to the inner solar system. Although the front of this craft was flooded by sunlight,the front was painted very dark so that the space pirates would have a hard time finding the ship. The name of the ship, the Odd-yssey, was painted in light blue, and the name of the company, Aqua Terra Mining Co (ATMC for short),was painted just below it in red.

ATMC specialized in mining the most precious and valuable resource known to human kind in the year 2316, water. The water was mined from icy objects in the outer solar system known as Trans-Neptunian Objects and then shipped back to the earth. This was a very dangerous trade as space pirates swarmed everywhere, trying to snatch this precious commodity for themselves.

This was the ship's maiden voyage, and so far the Odd-yssey had encountered no problems. On the bridge of the ship, the only door leading into the bridge was pushed open. As the figure behind the door emerged, everyone on the bridge jumped to their feet and saluted. Through the door walked a tall thin man wearing a crisp blue uniform. However, the uniform was off center and the shirt only partially tucked in. The uniformed man took three steps forward in a mechanical fashion. Hedidn’t notice the downward step, causing him to trip and fall down the set of three steps.

From the ground,still face down,the uniformed man asked the nearest officer, "Have we reached the asteroid belt yet?"

The captain slowly got up. He pointed to the large screen in front of him and ordered the navigator, "Show it on the view screen."

The navigator quickly pushed a button while once again responding, "Yes, captain!"

The view screen quickly changed from a screen with a lot of tactical information about the workings of the ship to a view of the space in front of them. However, the view was mostly dark. There were a few stars, but nothing else. However, with the three dimensional view of the screen the stars almost seemed like you could reach out and touch them. The captain, at first, stumbled behind his chair afraid that these stars on the screen would run into him.

"Where is it?" the captain asked after regaining his footing and senses.

"Right in front of you," the navigator responded.

"I don't see anything other than stars. Where are all the rocks for us to navigate around?" the captain exclaimed frantically, while waving his arms up and down even more frantically.

The navigator rolled his eyes back, trying his best to silence his groan. "Sir, that’s how Hollywood depicts the asteroid belt. However, that’s totally wrong. The true asteroid belt is nearly empty. Even though there are millions of objects, they are spread out by hundreds of millions of miles. In fact, on average, there is only one asteroid per one million miles."

"So we don't have to worry about hitting one?" the captain asked, confused.

"The odds of us hitting one are 100,000 to 1 if we were to fly blind through the belt," the navigator reassured. "However, we know where all of the larger objects are, and we’re not on a path towards any, so there’s no reason to worry."

The captain paced back and forth for a minute, mumbling "where is the excitement of that" and "it's an asteroid belt--we should dodge asteroids." Suddenly the captain came up with what he seemed to think was an excellent idea. "Navigator Griffen P. Simmons, find an asteroid and bank towards it!"

The navigator was very confused by this, but he was starting to get used to the captain’s level of eccentricity. "Okay, I’ll find an asteroid and adjust our course, but this is space, sir, so we can't bank. It's impossible."

The captain turned sharply towards the navigator. With a stern, angry look the captain marched up to the navigator, tripping over his own chair, but he managed to stay on his feet. "Don't tell me what’s impossible; just do it!"

"Yes, captain!" the navigator shouted with a salute.

As the navigator adjusted the controls on the wings a pair of jets went activated. One jet went up, and the other, on the opposite wing, went down. This caused the ship to spin slightly. While it was spinning the ship changed its direction of motion, much like an aircraft when it banks. To reverse the spin the jets were activated again for twice as long. Once the ship leveled and was headed straight in a new direction, the jets activated a third time to stop the spin.

Almost immediately the communications officer announced to the captain in a very worried voice, "Captain, we are being hailed!"

The captain panicked and jumped back a full step. He was certain that the space pirates had found him and he was going to have to surrender the ship. His father (the owner of ATMC) would not be happy about this. "Sp-space pirates?" he cried out.

This was very strange. There were not many space police around and most stayed close to the planets and outposts on moons. It was rare to find space police out this far. The captain ordered the communications officer to send a message to ask how their ship could assist the police officer.

Very quickly a figure appeared on the viewing screen, a police officer with a booklet that he was writing in. "I'm afraid I am going to have to write you a ticket," the officer stated.

"For WHAT?" the captain demanded.

"For breaking the laws," the police officer quickly replied.

"What laws?" the captain shouted. "We didn't violate any LAWS!"

"Wait a minute," the captain argued. "Hollywood does that all the time, and it works for airplanes, why wouldn't it work here?"

The officer, a member of the Physics Police who had previously had his face buried in the notebook, glanced up sharply at the captain and set his ticket book aside. "Well, Hollywood is wrong." At this point the officer smiled. "How do you think I usually make my quota? Anyway, an airplane banking works because the air creates a force on the wing that changes the direction of the aircraft. However, in space, there is no force on the wings as there is no air. Your wings are only useful when you’re landing on a planet with atmosphere. In space they’re just a good spot for target practice. Here’s your ticket. Try to not violate any more laws of physics. I’ll be watching."

At that the view screen turned back to the space in front of them. A police spacecraft passed in front. The craft was dark because the Odd-yssey was facing the sun, so the crew members were looking at the part not exposed to sunlight. The crew on the Odd-ysseywatched as the police craft's tail lights slowly got dimmer until they could no longer be seen with the naked eye.

At this point the communications officer handed the captain his copy of the ticket. "$100,000 space bucks! This is an outrage!" the captain muttered, forgetting that because of inflation over 300 years a hamburger cost $1 million space bucks, so $100,000 was literally pocket change (the smallest coin was the $1000 space buck coin). "Why didn't you warn me?" the captain yelled at the navigation officer.

"Hmmph," the captain grunted. "Well, take us to that asteroid!"

The Earth's WMDs (Women who make decisions) have been abducted by Space Pirates. The crew of the Odd-yssey need to search the Solar System to find the secret pirate based and save the WMDs from the space pirates before Earth descends to chaos - and without getting any more tickets from the Physics Police.

Hold on a second readers of this.

The captain did WHAT? Really? Oh that is not good. Hold on a second I will help you guys out in a second.

Ug, well sorry I have to go. You will just have to read the story for more.

I am an Astrophysicist teaching at IUPUI living in Indianapolis, Indiana. My avid imagination and vast knowledge of our Solar System gives me a unique view of the space around us and gives me a special chance to share that vision of it and of humanities possible future of it to you the reader.