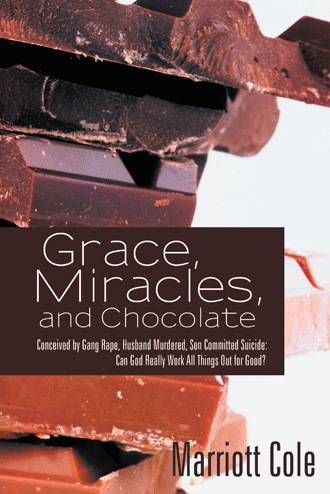 I Never Stopped Loving You

Marriott Cole knows that sometimes it is difficult to trust God, especially during the most challenging moments. In her memoir, Grace, Miracles, and Chocolate, Cole chronicles a life with more than its share of difficulties while demonstrating how she overcame tragedy through the miracle of prayer, laughter, and the grace of God’s love. Cole shares poignant anecdotes with accompanying Scripture, tracing her life journey beginning with the details of her first conversation with her birth mother. Despite the horrifying details of her conception, Cole describes how she was eventually led to forgiveness and to accept a second family into her heart. As she retraces her complex life and reveals her unique problem solving strategies, Cole details how she learned to rely on not only her faith, but also her inner strength as she bravely faced widowhood and the terrifying thought of raising seven children on her own. Grace, Miracles, and Chocolate challenges spiritual seekers everywhere to either develop or rekindle a relationship with Jesus Christ and to always remember that He is with us—no matter what comes our way in life. “This is an amazing story of God’s faithfulness, love and incredible miracles in the life of His faithful child. … Marriott is a real woman with real heartaches and triumphs. Her life story will touch many, many hearts …” - Amy McGuire, author of The Heart’s Discovery

Marriott Cole is a remedial reading specialist who currently lives in McMinnville, Oregon, with her husband and two cats. Besides her husband, her hobbies include spending time with her six living children and ten grandchildren, Bible study, and bridge.