My Stories And I'm Still Sticking To Them! 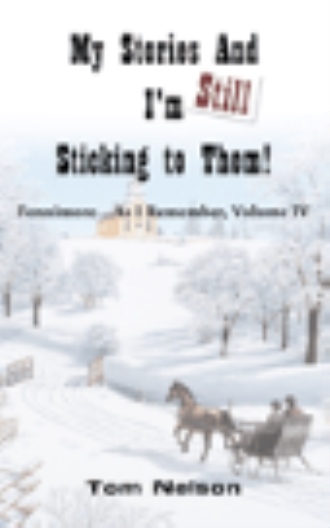 Excerpt from Scary Jump:
“.......However, a more serious dilemma occurred on numerous occasions, when my ball would take a big bounce off the rim and fly up on the garage roof and be caught between roof and the side of the house, high out of reach. Dragging the long, heavy ladder out of the garage was too involved and cumbersome, so I employed the next best solution. I went into the house climbed the stairs to my bedroom, opened the southern facing window, unhooked the screen, or storm window, and wedge myself out on the shingled roof, scooted to the power service line, squished on my back under the wires, being careful not to electrocute myself, then climbed down to retrieve the basketball and toss it back to ground. Simple enough.
“Now came the exit strategy which I had devised early on: Just scramble over to the far side of the garage roof and jump down from the edge thereby avoiding those hi-tension lines (not really but touching 110V would tend to get your attention) located next to my bedroom window…I wonder if my parents ever realized the danger they were exposing me to in that room, I could have been sterilized or something! My plan of jumping was a sound one, for when I stood on the ground I could reach up and touch the edge of that roof; not far at all. But, when I walked down the roof and sat on the edge, ready to jump, the distance became much greater––just like that high dive at the swimming pools. And now that I was there––up there– I would have to sit there and think a while about making that leap.
“So, there I would sit, contemplating this and that, studying the ground far below, pondering my chances of survival, wondering whether I should make the return back the way I came and take the chances of death by electricity.
“Meanwhile neighborhood fourth-warders would be walking past on the sidewalk, waving, taking second glances at me, some starring with frowns, as I sat and often hollering out encouragement, “Hey, Tommy, need help?” or, “Need a ladder?” or “Fraidy-Cat.” Things like that. To which I’d wave them off casually, replying back that I was fine, “Just checking the roof for my dad,” or some self-supporting fib.
“On occasion Hermie and Marilyn Brechler’s younger kids from across 12th Street would wander over to curb side with perplexed looks on their faces and observe me. Or retired farmer, Clem Reminapp, might walk out his front door, see me up there, shake his head, and then start down to Gus Johnson’s blacksmith shop, where his cronies sat in the warm and sunny doorway. He’d report in his thick Bohemian brogue. “Norm’s crazy Norwegian-Lutheran kid is back up on the garage roof, again.”
“Finally after a while, I’d make that leap of faith to the ground and then couldn’t believe how fast I’d traveled to ground zero, wondering what all my fuss was about.” .......... 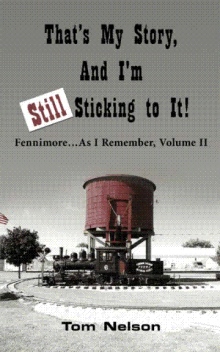 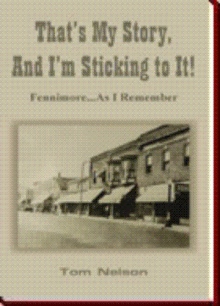 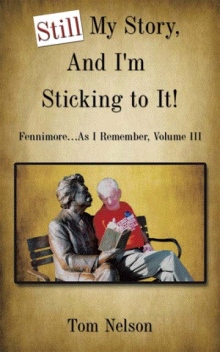 Some folks will often ask Tom what his columns in that Wisconsin newspaper are all about. He will answer, “Do you mean the one in the Fennimore Times, called Fennimore…As I remember?”…As though there were any other. Then he will respond:
“Oh, I write about a special place, friends and neighbors, happy times… what ever. Like swimming pools and pool halls, town constables and chiefs. City parks, paper routes, pastors, parsons and priests.
“I won’t forget town and country schools and dedicated teachers there within. With tales of playground hi-jinks…all to make you grin.
“The old places called a Blacksmith Shop, Gus shoeing horses at the open door. Fred Doan the Harness maker, Bill Buri, Wagon builder…these craftsmen are no more.
“The Fenway Theater packed with kids, admission one thin dime. A Friday double feature …Roy, Gene and Hopalong, cowboys for all time.
“There are neighborhoods and life long friends, creameries making cheese. Sparky’s Saturday night dances, ‘May I have this waltz…Please?’
“I claim my stories are but true, as best I can remember. And many do agree, but others shout… ‘Not in April, t’was in November!’
“Best of all, even strangers come to me and say, ‘I know this place and the stories that you tell. Just change the names, for then you’ll see…Fennimore’s my hometown as well.’

Tom Nelson was educated as a mining engineer, a career that took him into sales and management of mining and equipment companies throughout the United States. Now in retirement he has found another passion, that of columnist for his home town Wisconsin newspaper. In this, his fourth book, he still claims all his stories are true, but admits to an embellishment on occasion. Living in Southwest Florida, he can be reached at normsson@yahoo.com.j