NIGHT OF THE SEXUAL PREDATOR 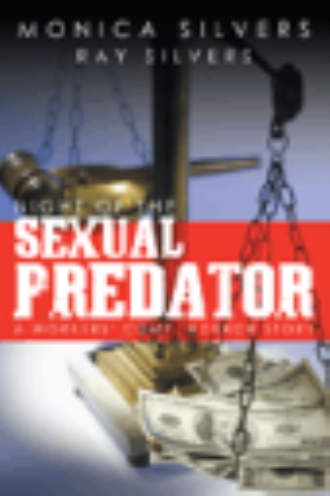 The big thing to me was that I had no control over any of this. I had not invited it in did not want this. This was not my dream, nor goal. It was fate just taking over. I felt like I was its target. I felt helpless and useless. I had always been in control of my life. Now I was under the control of Workers Comp, the insurance company and doctors.
The attorney controlled all access to all of these and informed me of only what he thought I should know. I could not even read or see the doctor's reports or any communications from the court's or insurance company. I was not sure of what was going on or when it was going to happen.

This is how I was looking at things now. I was very fearful of being killed or seriously injured by my co-workers. I knew they had followed me to wear my home was before. Have they found out where I lived is still a mystery to me. I did not tell them. They even knew where my parents and sister lived. At work they would tell me they had driven by my home and saw my car was gone. Or, they had driven past my parents’ house and saw my dad working in the garage or yard, or that my car was there. I asked them why they would do that and only got the response that they were just driving by. Where my parents lived, it had to be a deliberate intentional act to drive by. One just doesn't casually drive by there. It was out of the way to go by their home to get to any store or shopping. Besides that, they did not live anywhere near where my parents lived. I got the impression they were stalking me. It did worry me somewhat at the time they told me about it, but now it was of great concern to me.

I began carrying a tape recorder with me in my purse wherever I went. If I was ever confronted by any of them or just casually meet them, I determined that I would turn that tape recorder on, and if something would happen to me there would be a record of that encounter for the police.

I was pretty sure I would have some trouble finding a good lawyer for this matter because I could not divulge tape recording or its contents to anyone at this time. If I did do that within one year I could have misdemeanor charges filed against me and the tape would be classified as inadmissible. As long as I did not divulge the tape within that year I had done nothing wrong. After all, the main purpose of me making the tape originally was to protect myself from these predators. I had determined that if I ever met any of them away from my workplace that I would turn the tape recorder on and if they should ever hurt me I have a record for the police. This was my sole purpose in carrying the tape recorder around with me. I never in my life could have dreamed that Carl would open up on that tape and tell everything he did to me plus things he wanted to do to me as well as things he did to others at work now. He is really sick. He acted like it was okay for him to do those things to women. He acted as though his conduct was perfectly normal and it was all a game.

I really had him on that tape. Carl was even introduced to another person during our conversation. I felt very confident that there would be no problem in proving that all of my allegations would be proven. But, I had to wait until November 4, 1996 to divulge its contents. That would be the one year and one day for the Statute of Limitations to expire.

Soon I found an attorney in Beverly Hills, California. His name is Frank Cali. He had a reputation of being very aggressive in sexual harassment and civil rights cases. We talked at length about the case on the telephone and then set up an appointment. I was to bring everything I could to the meeting. I did not mention the tape recording to them though. I could not do that.

On the appointed date I met with Frank Cali and he reviewed the documents I had. It was May of 1996 and Frank informed me he would take my case but it was contingent upon me getting a Right to Sue letter from the Department of Fair Employment and Housing. I had already been to DFEH and was told that they would give me such a letter if I should request one. I did request the letter and then went to the DFEH office and picked it up. I returned that letter to Frank Cali and he said he would now draft a Summons and Complaint against the store, Carl Manson and others, and get back to me when it was ready for my signature.

Oh man. Now I had two lawsuits going. If Harry Dew had done when he was supposed to have done in the beginning it would all be in one action. But, that's the way it goes. This whole thing was essentially all the same matter but Harry Dew was such a lax and lazy person he refused to take the sexual harassment part because he said it would complicate the case. I had several people tell me to just walk away from all of this and forget about it. They said I should just act like this never happened. I just could not do that. I was not doing this for money. This was now a principle.

I could sense the gathering of the storm clouds. The winds of disaster began to blow through me with a cold chill. I could imagine the ugly thunderheads billowing skyward on the distant horizon, but I was totally unprepared for the bolt of lightning the sexual predator, Carl, would soon deliver, changing my life forever.

It had begun. This was like an omen. I could feel there was something very wrong with Carl. I felt ill at ease around him and the other guys.

I tried to keep to myself and just do my work. I knew all of them and was cordial to them, but they were always talking about how they could get rid of anyone on the shift they wanted gone. I felt that I got along with them okay, but deep down knew they did not like women on that crew.

The store was locked after 10 o'clock and the only people inside were the night crew. It was always very quiet. When someone talked you could hear them all over the store...

Monica Silvers is a widow and has an adult son. She quit school to pursue employment, and did not realize until later just how important education is in an individual's later life. She went back to school and graduated with honors. She is presently pursuing undergraduate work in Business Management. She is an avid reader and encourages others (even against their will) to read as much as possible.

Ray Silvers, Monica's husband, co- authored in the writing of this book. He, himself, wrote books pertaining to the mysteries of UFO's and extra-terrestrial beings. He did much research on stories from others as well as his own expierences. He was university educated and had a Juris Doctor Degree from a Southern California University School of Law. He was an ordained minister and did extensive research and studies into religions, faiths, superstitions and doubts.

As this book was completed, Ray passed to another dimension. We finished the book on a Tuesday and he passed the very next day. It was important for us to get all this information out to the public. So I am doing my part now in pursuing a mutual goal that we had on the plate before he passed. That is precisely the reason I can go forward and make this happen.

I had a lot of trepidation getting this book out, but I know that this is what he wanted me to do. So Ray, wherever you are, I am fulfilling one of the goals that we had set to do together. God bless you in all your endeavors. Until we meet again...