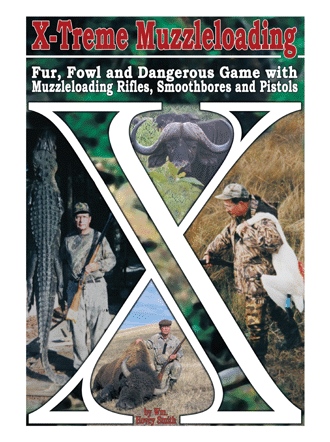 It was the first evening sit of a 2-day hunt, and my mind was asking, “Do you want to take this boar or wait for a bigger hog?” The “Boss Boar” in this bunch of pigs was by far the largest animal and looked like it would weigh about 150 pounds. This boar offered both a good-size target for the .50-caliber Howdah Hunter and the potential for yielding some good-eating wild pork.
The double-barreled pistol that I had in the tower stand represented those carried in howdahs as a last-ditch defense against tigers. The fearless cats would sometimes claw their way up the sides or trunk of an elephant to kill hunters occupying the lightweight structure on the elephant’s back. My location in a tripod stand 20-yards away from the feeding pigs was the best substitute that I could arrange at Texas’ San Saba Ranch. The pigs had come in cautiously. Several times the largest hog had stopped feeding and looked directly at the stand. I had added fresh branches for concealment, but needed to remain nearly motionless to avoid detection.
Early Spaniards had released wild hogs everywhere they settled in North America to provide fresh meat for passing ships and colonists. The descendents of these animals, and later escapees, proliferated in North America to the extent that millions of wild hogs are present in the Southern States, Texas and California. Some of these animals may weigh over 1,000 pounds. Each year several 600-1,000 pound hogs are taken in the Southeast.
Baiting with corn was frequently used by early settlers to coax hogs and other big game to within the sure-kill range of their crossbows, matchlocks and flintlock smoothbores. Although the percussion Howdah pistol had no direct North American antecedents, it was representative of muzzleloading handguns with two barrels and only front sights. These pistols were meant to be employed at ranges of a few yards against potentially dangerous animal and human adversaries.

The Howdah Hunter is a large double-barreled holster pistol that is not a replica of any particular gun. It is made in the Pedersoli factory in Gordon, Italy, utilizing locks and other components already made for the company’s double-barreled shotguns and rifles. The pistol is offered with two .50-caliber rifled barrels, the version I had, or with 20-gauge smoothbore barrels or with one rifled and one smoothbore barrel. All of the guns are 18½-inches long and weigh between 4½ to 5 pounds. A leather holster is sold as an accessory.
Pedersoli’s recommended charge of 25-grains of FFg and a patched round ball is insufficient for big game hunting. Conversations with Pierangelo Pedersoli and the editors of Italian hunting magazines repeatedly elicited the statement that hunting with handguns is illegal in Italy. Despite the pistol’s name, it was apparently inconceivable to these editors that anyone would want to take game with muzzleloading pistols when many more effective tools were available. I took it as a point of honor to demonstrate that the Howdah Hunter could, and would, hunt.
I had confidence that this gun with its shotgun-breeching and robust components could safety handle much stouter loads than the recommended charge. My challenge was to develop loads that would yield the 500-ft./lbs. of muzzle energy necessary to reliably kill deer-size game from the gun’s 11¼-inch barrels.

In order to provide a stronger kick-off to the combustion process, I changed the nipples from no. 11 size to the musket cap size. I also selected Hodgdon’s FFg Triple Seven black-powder-substitute powder to take advantage of this power’s 10-percent energy increase over equivalent volumes of black powder. In order to raise operating pressures, I also tried 270 and 370-grain bullets. Whatever combination of components I chose, it was vital that both barrels shot to about the same point of aim at 20 yards – even if I had to load different components in each barrel.
Heavier and lighter bullets not only shoot to different points of aim vertically, they will also show horizontal displacements. I slowly worked up to a charge of 60-grains of FFg Triple Seven using a 147-grain round ball, Buffalo Bullet’s 270-grain BallEt and a 370–grain Thompson/Center MaxiBall. I discovered that the right barrel shot the round ball 6-inches to the right, the BallEt struck closer to the bull and the MaxiBall was closest. With the left barrel, the Maxi shot 6-inches left of the bull, but the same powder charge using the BallEt was closer to the center with one hitting the red bull, although two other shots were low. I attributed the low hits to my arms tiring from supporting the gun, even though I was using both hands. Later shooting sessions confirmed that these loads were workable with each hitting within 2 inches of the bull’s eye. This was not precision shooting, but good enough to kill game at 20 yards.
It was easier to shoot the left barrel more accurately because the rear trigger was positioned more comfortably for my relatively short fingers. The left barrel offered the best potential for precision shooting while the right one offered a significantly more powerful load.


During the firing of about 20 charges, there were no failures to fire and the musket caps worked well without altering the hammers. These ¼ X 28 threaded percussion nipples may be ordered from Dixie Gun Works. Musket caps are easier to place on the nipples, and musket nipples will also improve the performance of any Pedersoli shotgun or double rifle. The only detrimental aspect of the pistol was the difficulty of forcing the .490 patched round balls and lubricated bullets down the bore. I quickly abandoned using the wooden ramrod and employed a large T-handled aluminum ramrod for bullet seating and barrel cleaning.
These loads are somewhat comparable to the .45-70-300 that was a favorite 19th century deer cartridge, and the Maxi Ball produces equivalent energies to some .44- Remington Magnum pistol loads. Even though velocities were limited by the short barrel, I had every expectation of these loads being adequate for hogs.
Because of the pistol’s 5-pound weight, recoil was noticeable, but manageable. The effective range of the rifled barrels is limited by having only a fixed front bead sight and comparatively short barrels. I am accustomed to shooting smoothbores that only have front (or no) sights. Although those who have never shot such guns wonder how they can be shot with any degree of accuracy, I can make repeated hits within the 6-inch kill zone of deer-size game at 20 yards. For accurate shooting it is imperative that the pistol be held the same for each shot, that the amount of bead showing above the rib is identical and that the bead is exactly centered in the swamped barrel rib. With aimed shots I was confident that the Howdah Hunter could kill close-range game. This gun cannot be expected to give accurate results with a jab-at-the-target-and-yank-the-trigger kind of shooting. It takes a deliberate shooting style to produce good results with pistols of this type. The more primitive the sights the better the trigger pull should be for best results. (An inexperienced duelist was likely a dead duck when up against a man who knew his pistols whether the guns had sights or not.)

Earlier that morning I had put extra corn under the feeder. After getting my partner settled in another stand, I returned to mine at about 3:00 PM. About 30-minutes before dark, about a dozen hogs come in. Most of these hogs were small and colored shades of black, red and grizzled white. Because of their cautious nature, I was thankful that I had taken the precaution of wearing a face mask. 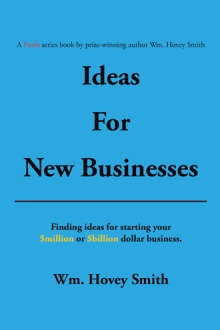 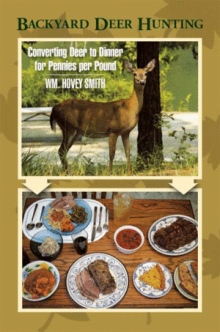 Go with acclaimed writer Wm. Hovey Smith as he factually, and sometimes humorously, relates the successes and failures of his half-century of muzzleloading hunts in North America, Europe and Africa with everything from Japanese matchlocks to in-line rifles. Although some nice animals are taken, this book is more about examining the guns and how to make them effective game killers than a recounting of one man’s hunts.
Detailed information about the guns and loads and a collection of his wild-game recipes adds to the usefulness of the book. Many of his recipes have been featured on his radio show, “Hovey’s Outdoor Adventures,” on WebTalkRadio.net, and his squirrel dishes were broadcast by the B.B.C. to their worldwide audience.

Now returned to Central Georgia, Wm. Hovey Smith is a Geologist/outdoorsman who has written 13 books and is the Producer/Host of “Hovey’s Outdoor Adventures” on WebTalkRadio.net. He is a Corresponding Editor for Gun Digest where he writes about muzzleloading guns and hunting in the U.S., Europe and Africa.