Issues and Inspiration for Those in the Second-Half of Life! 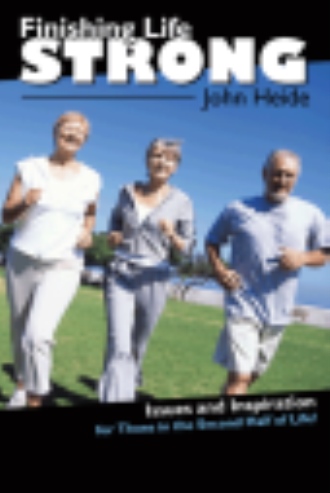 Resorts, cruise lines, and travel agencies have appealing ads that catch the eye of retirees who spend billions of dollars annually enjoying the second half of life! However, after the travel, the fun, and indulging in lots of good food is over, than what? When the shopping no longer satisfies and the hobby becomes a chore (how many birdhouses or afghans can one make) what’s next? Playing golf or watching soap operas can get old pretty quick. If physical limitations, financial challenges or relationship issues (divorce or death) become the reality, not permitting the fulfillment of the “dream” life, where can the “retiree” turn for fulfillment? How can one find significance in the second-half of life? from the introduction… Most readers of this book have been born in one century but live in another. With that in mind, consider the following: Ten thousand baby boomers are now signing up for Social Security every day! Each day in America, 11,500 people turn 60 years of age and, with more than 140,000 Americans now over 100 years of age, the United States has its oldest and largest second-half population in history! Some of you reading this book may live to be 100 years old. Forty percent of people in the United States are now 50 or older! Read that sentence again! The 40/50 window in America is now wide open … and millions of people are jumping through it! Consider also these startling facts: More and more people past 50 are opting to live together instead of getting married. They are reacting to financial considerations such as health insurance, obtaining income and other social benefits, as well as complicated legal entanglements. And, with the absence of a strong moral commitment to marriage, many in the second half of life are now doing what they previously condemned a younger generation for—bypassing marriage. Believe it or not, the first couple to get married in Manhattan, New York, after gay marriage became legal in July of 2011, were 77-year-old Phyllis Siegel and 85-year-old Connie Kopelov. Not only are many in the second half less moral than in the past, they are also drinking and using drugs more. Between 2000 and 2008 substance-abuse treatment admissions among those 50 and older increased by 70 percent. In 2008 more than 231,000 individuals over 50 sought treatment. Most people don’t like to think about their grandparents having sex outside of marriage or drinking to excess, but it is occurring at alarming rates. Divorce among the elderly is also on the rise (even among couples 80 years of age and older). This has created a host of new problems for families. When people leave God out of their life at any age they face the consequences of living in a fallen world—without God’s help! The results are serious and heartbreaking … but there is hope! Covering ten relevant topics, Finishing Life Strong…Issues and Inspiration for Those in the Second-Half of Life seeks to provide both information and hope for those travelling through this part of life. Using a discussion and question and answer format the reader can discover answers to some of the issues that they are going through personally or find help for others who are experiencing some of life’s most challenging issues. John Wooden the famed UCLA basketball coach would often tell his players, “As long as there is a second-half we can win this game!” This book can help every second-halfer to stay in the game of life and win!

With forty percent of people in the U.S. now over fifty years of age, millions of baby boomers and beyond are facing new challenges and choices as they journey through the second-half of life. This study guide helps to provide answers to the pressing issues that those in the second-half of life find themselves dealing with. Included in this guide is information about: Raising Grandchildren-over 6 million children live with grandparents. Dealing with Depression-the most common illness found among Second-Halfers Surviving the Death of a Spouse-the number one cause for stress Finding love a second time-read about couples who found spouses on the internet Health, Finance, Scams, and other important Retirement issues Making sense out of life by developing a “Lifetime Message” From 82 year old Marlene who is raising her great granddaughter to 95 year old Nola Ochs, America’s oldest college graduate to 93 year old youth pastor Howard Fox, true stories from the lives of second-halfers who have experienced both tragedy and triumph are interwoven throughout the lessons. If you are new to the “second half” or have been traveling this road a long time you will find yourself laughing, crying, learning, and being encouraged at God’s plan for every person…regardless of age. If you have a PULSE, you have a PURPOSE and whether you use this guide in a small group, a Sunday School class, or as an individual study, you can find inspiration and hope. YOU can FINISH LIFE STRONG! Looking for inspiration and hope? This book is for you. You will find numbers of practical and helpful suggestions to get you on the road to a whole new life of excitement in your second half. …from the foreward, Ken Horn Editor Pentecostal Evangel!

John Heide is an Assembly of God U.S. Missionary to those in the second-half of life! He works with churches across the nation helping to develop strategies and programs to reach the baby boomer and beyond generations! With his wife Judy they lead second-halfers on mission trips and community outreaches.