Choosing to Live not to Die

A Story of Three Altered Lives 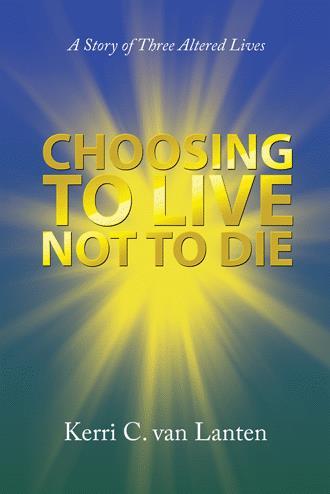 I don’t feel that everyone who commits suicide thinks about it for a long time. For some, it was probably a lengthy amount of time; for others, it was a split-second decision. I wish people would find another, healthier way to deal with their feelings. I hope this book helps others to relieve some of their thoughts and pain. I desire that they can emote rationally, and work on getting out their feelings and be able not to make this final, disparaging decision.

I still hurt when I hear someone has killed themselves. I met a young lady at school who lost her friend, and other folks who have lost family or friends. Also, Jen just lost someone recently without knowing the reason why. I called her a few times regarding that, and I’m sure each time it happens it’s a painful reminder that just doesn’t go away.

When I lost my friend a few years back, I was devastated. It was the first time someone I ‘knew’ did this, and I was crushed. This person knew my book was coming out and wanted to read it. It was completely shocking to me, the finality of it all.

Years ago, a young person who lived near me went in their garage, shut the door and put the keys in the ignition. You know what happened after that. What a waste of a life.

I was very taken aback when I heard about the young boy in Mentor, Ohio, that killed himself because some kids said to him, “You should go home and kill yourself because no one likes you anyway,” and he did. I was appalled at the situation.

And then when the young lady from Croatia killed herself, I was wondering, “What is going on there?” I was saddened when I learned that a total of four students from Mentor, Ohio had killed themselves. No one has the right to be hurting young people’s feelings like that.

It wasn’t for a long time that I considered not being here anymore.

I dabbled with the idea, but didn’t take any action.

I would have written a note for my family, and say that it wasn’t their fault.

I remembered the person from a few streets over who killed themselves, and how it must’ve caused such grief with their relatives.

I painstakingly would envision each family member finding me, and how devastating that would be for them.

It wasn’t something I wanted them to go through.

I was hurting so bad inside, but I wasn’t going to put them through that.

I believe I experienced this for a short time, because of who I would meet later, and what an impact it would make on my life.

I needed to experience that, in order to be able to write this book.

I don’t feel you’ve done an evil deed, or that you’re going to hell. I don’t feel God is cruel or wants you to end your life. I believe He wants you to look for the positives in life, and if you’re having a hard time with something right now, it will pass. God will provide the tools you need to get thru a situation if you would just let Him.

I don’t blame people for wanting to kill themselves, but they can make a better choice. They feel so damaged or betrayed.

Obviously, when you’re ready to kill yourself, you can’t get focused on anything else. You can’t get past the pain. The reality of what you’re doing isn’t sinking in. That hole in your heart just can’t seem to be filled.

I don’t think people set out to kill themselves. It just goes that way.

You get yourself in a situation, or it finds you, or it happens by default. It becomes so overwhelming, that you can’t stop thinking about it, and it just consumes you. It upsets you so much, that you can’t focus and regroup.

Like Jen’s friend, who you will read about, did he realize what he did? Who he left behind? I don’t think he was able to clearly see this.

Someone isn’t being rational or clear. This is a very wounded person wanting to unload themselves, not someone who is being balanced with their thoughts.

You get to a point, and you can’t think of anything else or anyone else, other than being able to end the situation that you are in.

The topic is so much in the news, that I believe young people feel that it’s an option available to them. It’s another way they can end their pain. But, it’s permanent.

I wrote this book because I would like people to heal. I wish for them to go on with their lives. I don’t desire for young people to get so caught up in the ignorance of high school. I don’t want them to feel that things won’t change.

Choosing to Live delves deep into the loss and pain that someone experiences while making a choice to end their own life. It also allows a loving daughter, Jennifer, to give you her perspective on losing her mom as a young teen, and offers insights about Ingrid, Jen’s mom. This book also explores the pain felt from losing a family member from cancer, a brother killed in Vietnam, and a sudden death of a parent. It also touches on the loss felt from losing someone thru the ending of a relationship.

Kerri C. van Lanten is an inspirational writer living in the Midwest. This is her first book. Her heart is in helping people. She has other books that she plans to write, with God guiding her path. Her love for family, friends and animals is a big part of her life.