This, That, and Everything 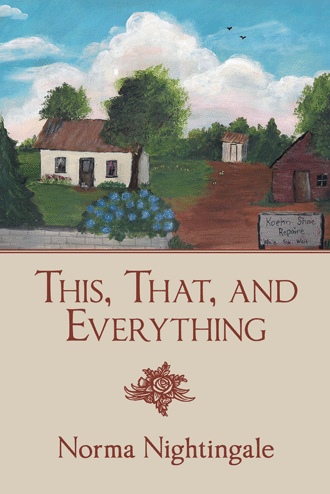 This book is a true and often hilarious account of the starts, the stalls, the reverses, and the restarts of the author’s life. It covers the whole range of her life from childhood all the way to grandma hood and beyond. Sometimes you will want to laugh and sometimes to shed a tear. It will help you realize that what you have experienced is only normal human existence after all. I mean how can you live on this earth ball along with 6 billion other people and be different or odd?

The author, Norma Nightingale, lives with her husband and daughter in Montezuma, Kansas. This town, home to about 900 people is about 27 miles west of the famous Western town of Dodge City.

This, That, and Everything shares the true and often hilarious account of the starts, the stalls, the reverses, and the restarts of Norma Nightingale’s life. It covers the whole range of her life, from childhood to becoming a grandma and beyond. In a memoir that is humorous and sad by turns, she recounts her life, which began as the sixth of eight children born into a Holdeman Mennonite family. Their way of life was to live in simplicity with economy and modesty—including the way they dressed and how they conducted themselves, not drawing attention to themselves.

She tells of her childhood growing up in central California on the property of the Gallo Winery, where her father worked. Her marriage at seventeen to Winston Nightingale, who was eighteen at the time, opened a new and exciting chapter in her life, first in California and later in Kansas, where her husband was offered a new job. She talks of her devastation at discovering that, after having three children, she had early stage cervical cancer. Happily, she survived and thrived in Kansas with her family.

This, That, and Everything is the charming memoir of a woman who continues to live her life to the fullest, with love, hope, and a wonderful family.

Norma Nightingale was the third youngest in a family of eight children and grew up in the San Joaquin Valley of central California. She now lives with Winston, her husband of over forty-five years, in Montezuma, Kansas; they have three grown children. This is her first book.