In the Shadow of the Sun King

The Winding Road to Versailles 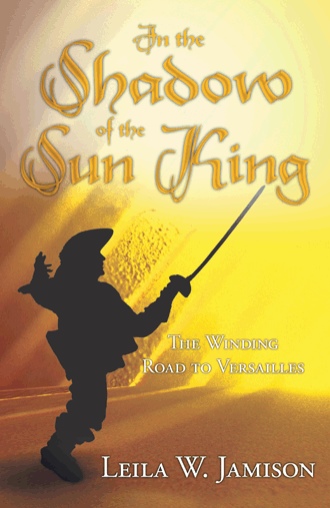 Marc stood on the deck of his new ship ‘Artemis’ moored at the Venice shipyard, and smiled with satisfaction.  He was sure he going to make a good deal of money, perhaps a fortune, and he was only twenty-one.  He now headed the Argosy Trading Company along with two partners, Captain Dorn Partyka who had instructed him in seamanship, and Vittorio Velati who had taught him soldiering.  He looked around the ship with pride, eying the pristine white sails, the massive rigging that was making a drumming sound in the stiff breeze, the shining varnished deck, and the crew working diligently at the task of preparing the ship for her first voyage.  His ship, His man, His coming success!  This was his first real possession, and it had taken fourteen years of hard labor to reach this point.

He wished his Uncle Simon was alive so that he could see him now.  It was Simon who always referred to him as the bastard he was forced to raise, and told Marc when he was a child that he would never be more than a common laborer…

Marc recalled the day when his first meeting with the royal family occurred.  Anne, the Queen Mother had requested his service to escort a young lady who wished to travel west to see her family because her father had recently died.  She told the Duc d’Alençon, Marc’s employer, “The girl needs to be protected on the journey and I have heard M. Esprit is trustworthy.  M. le Duc, will you give your permission to borrow this young man and three other reliable men of your Guard to escort her.”

“Of course,” the Duke agreed.  A request from the Queen, although phrased politely, was an order.

Marc arrived for his appointment with the Queen Regent.  While in the service of the Duke, he had observed the many titled people who came and went, and he had acquired some polish.  When he was ushered into the Queen’s present, he bowed smoothly, and she was impressed.  Marc was pleased to have this audience that might lead to further recognition.  Queen Anne told Marc she needed a personal favor.  She explained that a young girl whom she had befriended, wanted to visit her family in Rochefort because he father had just died.  She needed protection on the way, and the Queen had heard that he was trustworthy.  Marc was disappointed; he had expected to carry important dispatches.  The queen emphasized that the errand was confidential to protect the young lady’s reputation, and asked if he could provide three more reliable men so that there would be large enough escort to forestall any trouble that might arise on the journey.

The Queen instructed, “Go to Val de Grace church tomorrow morning at 7:00 a.m. and the lady will meet you there.  She is very young, only fourteen, so it is most important to protect this child.  Will you swear not only to protect her person, but her honor?”

I swear it, Your Majesty,” Marc declared.

The next morning the new equerry, accompanied by Vittorio and two other friends from the Duke’s Guard, entered Val de Grace Church.  When Mass had ended, one person rose and walked to the rear where he stood.  Marc bowed, then raised his eyes to see a small girl with amber eyes and hair of the same shade.  She had an erect bearing and the slimness of her figure was made further apparent by the fact that she was wearing a man’s courier outfit, complete with a sword at her side.  She wore leather boots and held a black plumed hat in her hand.

“Bon jour, Monsieur.  I am Mllle. duBois,” she announced.

As Zoe walked to the entrance, she inspected the tall muscular man who bowed in greeting.  He had a patrician nose, a well shaped, generous mouth, and the most charismatic eyes she had ever seen, so silvery gray with long black lashes.  When removed his hat, she saw that his hair was black and wavy.  He bowed courteously, but as he eyed her outfit, he was frowning.

Marc had watched Zoe’s approach, clad in her masculine outfit, thinking the sword a bit theatrical.  They walked outside.  “I was told you were supposed to be a young girl in mourning.”

“I think this outfit is much more sensible.”

“No, Mademoiselle, I am charged with your safety and that is inappropriate for many reasons.

You are alone?  You do not have even a maid with you?”

Because Marc stood, shaking his head, the girl said haughtily, “Her Majesty said that you and your men are trustworthy,” and she glared at them all.

Zoë glanced at the coach and said, “I am not riding in that.  I prefer to ride my horse.”

“Ridiculous,” said Marc.  “It will be a long trip and we will go great distances each day.”

As much as he wanted to spank this unruly child, for in his eyes, she was a spoiled child, he kept his composure.  He said sternly, “

We are not moving until you change.  Please go and put on proper attire.”

Zoe saw that he was going to be adamant.  “All right, I will on one condition.  Get rid of that stupid coach and let me ride my horse.”

The court of King Louis XIV was the envy of all Europe for its grandeur and etiquette. Marc Esprit, a poor but clever boy from Normandy, vows that he will be part of this exotic scene.  He encounters Zoe duBois, a free spirited ward of the court who will change his life and ambitions in ways this would-be aristocrat could not predict.

After serving as a soldier, young Marc travels to Venice, where a man does not need a title to become successful. With borrowed money, he acquires a ﬂeet of ships. Trade in middle-eastern spices and luxury goods makes him a wealthy man.  When he saves the Sultan’s treasure ship from pirates, he receives an unexpected gift and some disastrous news.

Marc again meets Zoe, now penniless after the death of her titled husband. They travel to Sicily and Greece, but he deserts her on a remote island to pursue his ambition.  At last, he has the opportunity to serve the king of France.  Five years later, he returns to Zoe.  After an acrimonious reunion, she agrees to come to Paris, but again she complicates his life

Leila Jamison’s interest in French history, especially that of the time of King Louis XIV, was fueled by her extensive travels within France. She has edited and written articles for professional publications. She lives in Pittsburgh, Pennsylvania.