by Mary A. Allen 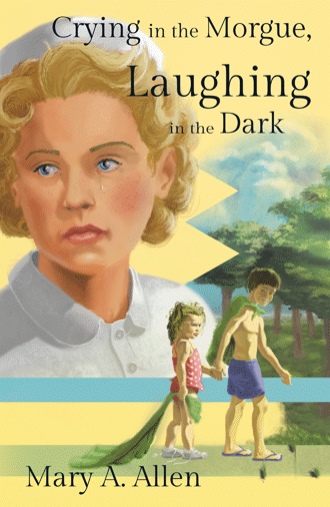 “Oh, Susan, it’s so good to see you.” She reached over to draw her friend into a hug. “Please come in. I was just packing everything into boxes.” “Myra, I have some groceries in the car for your family. Let’s get those first.” Myra’s tears started up again. She raised her hands, pressed her fingers to her lips, and nodded at Susan. “Thank you, Susan,” she whispered, her voice thick and soft. She reached out to Susan and took her hand and squeezed it hard as the tears fell. She opened her mouth to speak again, but nothing came out. She nodded and mouthed thank you. “Hey, come on,” Susan said, nodding toward the door. “Let’s get this stuff in the house before something spoils.” Myra gave a little-girl laugh and bounded toward the car with her friend. “It’s not much, just a little something to take with you.” Susan handed her two plastic bags and picked up the last two. Do you know where you’re going?” Myra hesitated a moment and swallowed hard. “Everything is going into storage except some clothes, some food, and essentials. I’m glad it’s summer. Kids are out of school for a few more weeks. Steve knows a little campground about twenty minutes out of town at the base of the foothills.” She sighed and hung her head. “Right now the kids think this is a grand adventure. But it will get old soon enough.” Myra began to cry large, heavy tears. Susan waited for Myra to continue. She knew her friend’s heart was heavy and she wanted to be a compassionate, understanding friend. “Oh, Susan, I’m such a terrible mother.” Susan’s eyes widened. Her mouth parted slightly. This was not what she expected Myra to say. She thought finances and homelessness burdened Myra’s heart. Or, she might worry how long they would be unemployed, homeless, and penniless. But, a bad mother? “Why would you say that?” Susan asked spreading her hands wide. “Because I yell at the kids all the time. I’m short tempered, cranky, and critical with them. And, now I’m dragging them out of their home.” Shaking her head, Susan recalled her own parenting past, when her children were small. She opened her mouth to tell Myra that young children had a way of bringing that out in a mother. And, that children were resilient and would survive this trial. “Oh, Susan, I’m a failure as a Christian. My faith is so small. I struggle with understanding why God has allowed all this to happen to us.” They set the grocery bags on the kitchen counter and there was a slight pause in the conversation as Susan grabbed Myra’s hand and gave it a gentle yank. “Myra, you are not a failure in your faith, or a terrible mother. You’re not struggling with trusting God. You’re struggling with making sense of your circumstances. Don’t look at your life and wonder what God is doing. Look at God and know that He is in control, and there is a purpose for everything—even the bad things. Myra, make an appointment with Pastor and tell him about your struggles. He can help guide you through some of these dark days.” *** Myra poured out her heart to Pastor Edward. When she was done, he leaned forward, put his arms on his desk, and looked into Myra’s eyes. Fear and confusion permeated Myra’s spirit. “Myra, I want to explain what is happening to you in a way that makes sense. To assure you that God isn’t punishing you, but creating something beautiful.” He paused and Myra scooted to the edge of her seat. She didn’t want to miss a word. “Myra, have you ever seen a tapestry?” She nodded. Pastor Edward smiled. “The front is beautiful. The work of a craftsman.” Myra nodded again. “The front makes sense. The weaver works on the design he sees and makes it beautiful. But the back is a tangled mess of strings and knots. It doesn’t make sense, and it is most often not a pretty sight.” She made no comment, but her eyebrows rose in expectation. “Our heavenly Father is weaving our lives like a tapestry. He can see the beauty from His perspective above. But when we look up from our earthly position, we only see the strings and knots crisscrossing the fabric. We must believe that He’s making something beautiful of our lives.” Myra closed her eyes and considered the strings of her life. She felt tangled up in them. Her life was imploding like the demolition of a long-abandoned building. A tear escaped its captivity and ran down her cheek. She opened her eyes and looked at Pastor Edward. She hesitated while she tried to make sense of it. “I guess it’s like the song the Gaithers sang about making something beautiful of all the awful things in my life. My castles have crumbled and God will make my life beautiful. Maybe, not in spite of my trials but because of them?” Pastor Edward encouraged Myra with a broad smile. I must be getting it. “Myra, look, God is working in your life. Sometimes we need a little help, a little counsel. I know a wonderful counselor, a dear Christian lady, who you can talk to and help you work out your frustrations. The church will pay for six sessions for you. Sometimes it helps just to talk through the crumbling castles.” Another tear escaped Myra’s eye. She nodded, her lips said thank you, but her voice remained captive in her throat.

With four active boys at home, forty-one-year-old Stella Grayson has no energy or desire to raise another child. When she becomes pregnant, she does everything she can to deny her pregnancy exists. When little Myra is born, Stella refuses to acknowledge the child, hoping she can put the baby up for adoption. Stella’s husband, John, would never agree; he’s been hoping to raise a little girl. The doctor sends Myra to the morgue to die. But God intervenes, and Myra is given a chance at life.

Despite Myra’s deep feelings of inadequacy, the Lord gave her an unquenchable love for others and an irrepressible joy for life. Her journey through childhood and her adolescent years is long and the struggles are hard, but the end result surprises even Myra’s bruised and tender heart.

Based on an inspiring true story, Crying in the Morgue, Laughing in the Dark is filled with deep emotional truths that speak to the heart of women. With real and sympathetic characters, the story weaves a picture of God’s tenacious love and the joy that could not be contained in his precious daughter.

Mary Allen lives with her husband Bob, the love of her life. They’ve been married a whole bunch of years. They have a wonderful ordinary family they love with an extraordinary love. Mary loves to sing, read, laugh and make people smile. She hates high tech gadgets, but puts up with them. Just barely. She’s hoping she’ll inherit a million dollars from a long lost relative so she can quit the job she loves as a home health nurse to stay home and be a full time writer. But she’s not holding her breath. When she speaks about God at an event, a hand full of people listen, but when she prays, the God of the universe hears every word.