Whirlwind on the Outlaw Trail

by Dale B. Weston 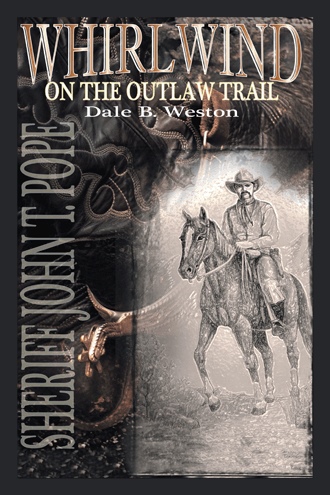 As he was in jail next afternoon, he watched Butch Cassidy ride up and dismount, vault over the log protection, and stick his head in the door. “How about a cup of coffee? It smells purty good.” “Sit down.” John T. poured a couple of hot, steaming cups of boiling coffee. Pope knew it was strong, had a couple of day’s grounds in it. “I thought you good Mormons didn’t drink coffee,” Butch teased. Now John T. Pope knew Butch had been raised a Mormon himself, and smiled with the jostling. “It’s a frontier staple, and if we all drank out of the creeks and rivers as we traveled around, we’d be dead of dysentery!” Butch nodded with a chuckle. “If I’ve gotta boil my water, I’m puttin’ coffee in it too. Your alfalfa looks darn good in Red Creek.” “I don’t know when I’m gonna get time to put it up. Why don’t you take a scythe back when you go? Since its starting to blossom, put it up to save it.” “Ah,” the outlaw grinned. “I never got the knack of a scythe. I’m a poor mower. You better hire some of the loafers around here to go do it for you. Whew! That coffee is bitter as hell, Pope. You better change the grounds once in a while.” “We got sugar and milk if it’s too strong for the likes of you.” Cassidy laughed at that, and stood up, taking the hot pad, and poured them a couple more cups. “Can I talk to your prisoners?” “Sure can, but you’ll have to take off your decorations.” “I forgot they wuz there. I guess I’m just that used to them.” Butch unbuckled his gun belt and hung it over the back of a chair, and John picked up his own shotgun and followed Butch back to the cell, listening to their conversation. Matt Warner was glad to see his friend, and they trusted Pope, so it was an interesting conversation. Butch told Warner he’d get him free one way or the other. “Maybe it’s better to stand trial, serve my time, and clear my name. They can’t give me too much time for what I’ve done. But I could really use a lawyer.” “If we don’t get you free on the way to trial, I’ll get you a lawyer. I’ll hire Douglas Preston from Rock Springs, but you aint there yet, Matt.” Cassidy winked at his friend. “We’ll be ready and keep an eye on what’s going on. Okay?” “Sure.” “Can I get you anything?” “No, Pope feeds us what he eats. We’ve never had it so good or so easy.” As Butch buckled his gun around his waist, Pope said, “I don’t have a warrant out for you Butch. So as far as I’m concerned, you have earned amnesty. You can get a ranch, marry a gal, raise a family, or whatever you take a notion to do. But if you do some of the things you indicated to Matt that you are willing to do, well then I’ll have writs and circulars coming for me to arrest you, just as sure as God made little green apples.” “Little green apples,” Butch repeated, showing his rapt attention. “When I have a warrant for you, I’ll come and serve it! I’ll give you notice somehow ahead of time, if I can, because you’re a likeable guy, and I’d like to have you as a friend.” Butch walked outside, vaulted the log barricade and reached out, taking the bridle reins, but before mounting, he looked back at Pope and said, “If you try to arrest me, I’ll kill you, John Pope.” So there it was.

In the year 1896, the sheriff of Uintah County, John T. Pope, rode alone on the trail of Butch Cassidy and his infamous Wild Bunch. Hailed as one of America's greatest lawmen, John T. Pope lived by the fire in his blood and the gun in his hand. Because John never boasted about how many bad men he'd actually been forced to kill, the outlaws he chased from Uintah County, and surrounding regions, have received more notoriety, but John's fame with a blazing gun and keen intellect was well known to those that knew him. Sheriff Pope despised the yellow cowardice of backshooters and badmen, and he rode on the trail of many. Butch Cassidy offered as much as $4,000 reward for the death of the tough-as-nails sheriff. Unmarked graves bear witness that a few fools tried to collect. John T. Pope was a genuine hero of the American west, fighting to make brighter and safer communities for future generations. He was an entrepreneur, pioneer, patriot, rancher, trapper, freighter, tracker, lawman, attorney, and family man.

Dale B. Weston had a tremendous interest in history and a memory that permitted him to recall what he had learned. Dale was an avid reader and scholar, and as a result, he acquired much knowledge in the quest to fuel his mind. His storytelling abilities were born from the desire to share with others what he had learned. He underststood all aspects of western living, including land and water laws. While traveling, he could quote to his companions the specific dates when the water rights of rivers, streams, or tributaries were filed on. He enjoyed hunting for Indian artifacts, and acquired quite a collection. He respected native Americans and their ways, as well as the courageous pioneers that settled the frontier, taming it. Dale was a patriot, loving America, and the price of its freedom until he was easily brought to tears. George Washington, especially, was a personal hero, as well as many of the founding fathers and martyrs of our country. He had an avid interest in the history of the Mormon church, and life in the early settlements of the west. Dale enjoyed his family, and made them the first priority in his life, always taking time to nurture, serve, and support. He was a champion for truth and integrity. He raised his kids by the motto of "Right makes might." Dale was extremely gentle with his loved ones, and that includes cats, dogs, cattle, and horses. Dale loved building things, and he has gone to construct an eternal mansion for his sweetheart, Pam, and it will no doubt include a quaint white railed porch with a swing.