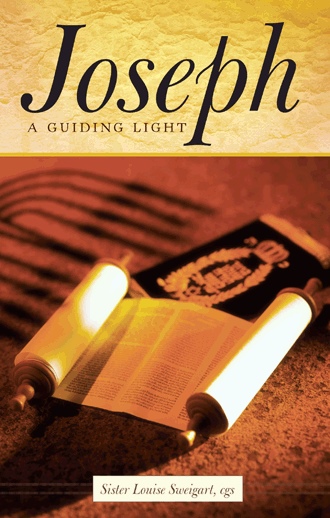 Part 1, Chapter 1. He stopped in his tracks and stood as in a trance. “Come on, Joseph!” It was Aaron calling. The others had gone on ahead and now Aaron stood beside him, tugging at his sleeve. “Come on! What has come over you?” Joseph smiled and followed his friend, although in truth he would have much preferred to sit down under the tree by the path and dream awhile. Who was that girl? Just now he had glimpsed her from the point of the bluff as she rounded the corner of the path in the village — a girl rather newly come to Nazareth. He had seen her before. Indeed, he smiled to himself, had he not grabbed every chance he could to see her? She was different from the other girls. True, he would be hard put to say just how, but his heart told him it was so. Every day she went to the well when all the girls were there. She laughed and talked with them, but what was it—a certain quiet seriousness about her manner? She was not aloof, no, not that. She seemed, indeed, to have a ready enough smile, but wasn’t silly as he had noticed the other girls were wont to be, and especially if the boys were near, certainly never coy or flirty. But when this girl smiled, Joseph mused, it was as though all heaven had burst upon the scene. Who could ask him to deny she was lovely? But there was something else—that elusive sense of transparency, a simple dignity, and an uncommon graciousness in a maiden so young. Thirteen, maybe fourteen, no more! And maybe that was it. She seemed to be wrapped about with an aura of grace, of which she herself appeared to be totally unconscious. She was physically beautiful, all right. But it seemed to be far more a suffusion from within. This touched Joseph very deeply. “What is it with you, Joseph?” Jacob broke into his reverie. “Yeah,” chimed in Ariel, “you’re like a man in love.” Joseph grinned sheepishly at his friends’ kindly teasing. But later that evening he wandered alone under the deep starlit canopy of God’s heaven and thought of this girl who had indeed captured his heart. He was well into his twentieth year. It was not too soon for him to be thinking of having a family, a thought that made him shake his head in perplexity. He had been apprenticed early on to his uncle, the village carpenter of Bethlehem, town of his birth and of his ancestors. Already he had a nice trade built up in his little shop here in Nazareth. He thought of how he had come here when his apprenticeship was completed, to be near Rabbi Johanan, Aaron’s father, whose spiritual guidance he revered and treasured. Rabbi Johanan was also a Bethlehemite by birth and a dear friend of Joseph’s father and his family. He decided it was time now to speak to this good and holy man of the love that filled him with such joy, and of the strange dream of family and fatherhood that pervaded his being with such conflicting emotions, leaving him confused and bewildered. He had known the townsfolk would one day expect him to be betrothed, and had he not prayed and trusted that, as God had called him, He would surely provide someone who would assent to share his promise? Beyond that, he had never foreseen any further desires within himself. Yes, he must seek out his friend, the rabbi, and open his heart to him as soon as possible.

Joseph, the young carpenter of Nazareth has lost his heart to the maiden he has seen coming from the well. Who is this girl? He is expected to marry. He dreams of fatherhood. But he has a secret, which fills him with conflicting emotions. How is he to reconcile his desires; and will she accept him?

You may feel you know Joseph; but have you ever tried to plumb the depths of his heart – to tremble with his love, to tingle with his hopes, to be enmeshed by his fears?

Wouldn’t you like to meet his friends? And what of this maiden who holds his heart so captive? Have you ever pondered on his ecstasy when she accepts his proposal, and his agony when confronted by evidence of betrayal?

Although much is fictional, and sometimes based on accepted legends, the customs, setting and key events are true. Come, and meet this couple whose hidden lives of fidelity to God have forever changed the course of history.

Sister Louise, cgs, is a Contemplative Sister of the Good Shepherd. She presently resides in Fort Thomas, Kentucky, where she spends her days in prayer, community activities and hobbies. Whatever her occupation, Saint Joseph has been her companion during her 71 years of religious life.