Kathleen of the Outer Banks 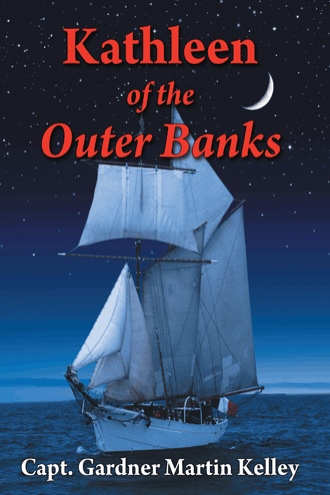 The tale of “Kathleen of the Outer Banks” follows the tale of “Blackbeard, the Pirate vs. The Outer Banks Boy from Nowhere” by several years. The ship log used to record events that took place over the years was more accurate of the events than the dates.

The years passed and shipwrecks were less frequent. There was enough however that there were always boards from the wrecks to build homes. The old man had built a Charleston S.C. style house with columns. The old poop deck fortress was now well hidden behind the big house, along with the stable that housed the fine pair of carriage horses.

In his old age, the old man was proud of his home and his accomplishments. He sent to New England for a ship load of supplies to spruce up the neighborhood. Enter Captain Kelley and the schooner “LIZZIE MAE”.
The Captain of the “LIZZIE MAE” was pleased to receive the delivery order. With steam shipping now taking over the trade routers, he had let most of his crew drift away. With Chips, he sailed the schooner now with only his two old men that were his grandfather’s brothers. They were aboard, rather than staying at Snug Harbor’s retirement center.

The schooner was turned into the wind and anchored, as the sails were lowered. There were shouts and cheers of approval heard coming from the watching people. There was soon a welcome group that rowed out to the schooner.
In the few days taken to unload the goods the Captain and Kathleen discovered that they were in love. The needle in the barometer predicted a storm was coming up from the Caribbean. The ship had to have sea room to out sail or maneuver around the storm. A quick marriage ceremony was performed and the schooner sailed with the fair tide out the inlet.

The now old, Patriarch watched the schooner departing, from his seat high on the old poop deck and he was happy. He thought how far he had come from his early arrival here as “The Outer Banks Boy from Nowhere.” He decided that all was well with the world.

A Sailor is Born on a Winter Morning

The wild wind was from the southeast and threatening to bring snow. The ninety five foot Maine coastal schooner “LIZZIE MAE” hove into the wind under the light of the hundred foot tall tower of Boon Island Lighthouse. In the lee of the island with her sails reefed she was able to maintain a fairly smooth position. The vessel could not be anchored as she had to be ready to sail off if the winter wind veered.

Boon Island Ledge, just beyond the scope of the bright light from the tower was too close for any relaxing of vigilance at the wheel.
Captain Harry M. Kelley let the schooner move ahead on first the post tack and then pointed the bow directly into the wind. The vessel dropped back toward the rough rocky ledge. When the wash of the waves showed off the rocks the schooner was allowed to fall off on the starboard tack toward the light tower ahead. This procedure was followed for four hours on the night of January nineteenth, 1913.

The waves battered and the wind blew and the crew fought the elements of the winter storm. God must have closed his ears to the cursing of the captain against the wind. In the early morning of January 20, 1913 the captain’s wife had his son G. M. Kelley. The wind dropped to a good sailing breeze simultaneously with the screams from below.

The “LIZZIE MAE” with her new crewman aboard sailed clear of Boon Island and headed for Portland Head Lighthouse. With the fair wind the Captain could now entrust the steering wheel to the old ship carpenter “Chips.” The old man had acted as midwife with the help of the cook, he was happy to relieve the captain at the wheel. The below deck cabin kept warm with a pot-belly wood stove and the duty that he had to perform had tired him out.

Chips assumed the chore that was necessary. He was a very old man and was a good sailorman, always ready to do his part, just as the captain had done his part by staying at the wheel to keep the schooner from disaster. Now the captain was free to go below to the cabin and comfort his wife and hold his son.

Chips watched as sparks showed around the “Charlie Noble” (smoke stack) indicating that the stove was being fed a supply of fire wood, he saw the smoke waft away to leeward.

All was well with the world, the captain had his son. Chip watched Cappi grow and after another son was born, Eva moved ashore to live with “Gram.” Cappi as his father insisted that he was to be called became Chips charge.

The boy learned fast and the years just seemed to fly. The Maine Coaster sailed into ports from Eastport to Boston. The overnight stop overs at the ports were often for fun along the way. Cappi was often embarrassed by the attentions his father gave to young women. He blamed it on the frequent appearance of “John Barleycorn.” Never the less, Cappi wanted freedom. He wanted a ship of his own.

The frequent indiscretion of his father along with the promiscuousness of the young women and girls allowed aboard helped to make Cappi a high minded sort. He wanted a ship of his own and went about the ways to get one. At nineteen he (sat) for his first captain’s license. He got his own ship, but not as he had expected.

His father and several local basketball players were in the Machias Hospital, down with rheumatic fever. He took over the family business, namely the “LIZZIE MAE”.

Cappi’s grandfather had several brothers. Judd and Emery had just laid up the old “MARGUERITE” and were at loose ends. Cappi did not know of Judd’s early days, only that he was a licensed captain. Emery had spent most of his life at sea, away from home for long stretches of time. He had a large family of five boys, now young men. Five girls, aged from grown up to the most recent one about ten. Emery had not liked the time he had with the last girl and she had a hook nose that resembled the Jew peddler in the district.

Emery shipped aboard a three master sail boat and though he sent money home, he never returned. He and Judd were pleased to accept a proposition from Cappi to come aboard the “LIZZIE MAE” with him.

In these lean times there would be no set wage, but good grub and keep as long as the schooner sailed. Both of the old men said, “Better than an old sailor’s home.”

The old grandmother sat in the sand watching over the swimming frolicking children. It would have made a great subject for a painting by Norman Rockwell. The small waves washed up and flowed back down the smooth sand beach as it had been doing for hundreds of years. A lone conch shell with a hole worn by the constant wash up and down was an ever supplying ingredient to the beach.

The woman was keeping a watch over all, but it was very evident that her reason for being here was to protect the blue eyed girl from harm. There were other blue eyes, though none had the shiny white tresses of her granddaughter.

The girl walked from the water through the sand to the drying towel that was waited for her. She carried a large live conch that would serve as the main course of their evening meal. The ease of getting food was the main reason that Mr. Olson had decided to settle here after the loss of his ship.

The old woman stopped at the rain barrel and with a lar¬ge shell used for the purpose scooped fresh water onto the wet with salt water head of the girl. Later she would comb and brush it to a shiny luster. 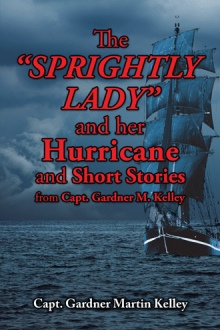 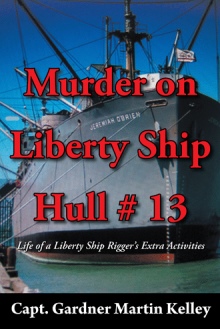 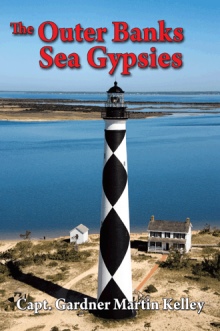 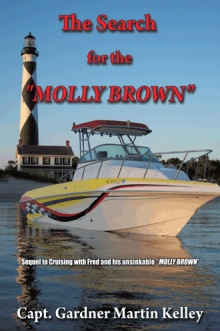 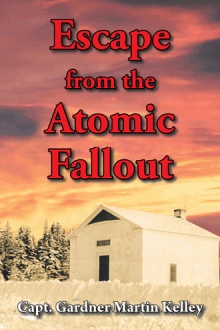 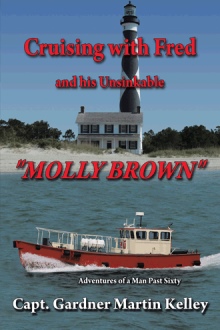 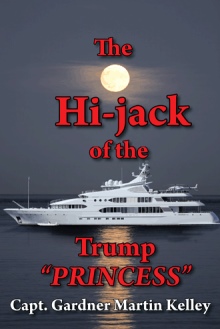 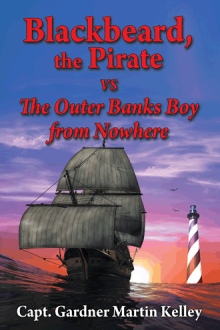 Kathleen Olsen called Svenska Flicker by her grandmother is of Swedish stock. The old grandmother wants better than a shack on these beautiful Outer Banks Sea Shores; she wants her to have the whole world, as she did sailing with her husband.

Kathleen is guarded well, not allowed to run loose as are many of the young girls of the Outer Banks. She is pure and innocent when a young captain flaunts his skill and daring to bring his schooner, white sails full into the inlet.

Kathleen sees the captain and his ship, as her prince charming on his white charger. It was love at first sight and the romance blossoms. Married, the lovers sail on and on.

Then Svenska shows a wild streak in her so demure ways and has to be punished. All is forgiven, the crew was happy. Then tragedy strikes, Kathleen dives from aloft in the rigging and hits the rail. Broken and bloody she is almost feed for the sharks.

Bunk ridden, Kathleen tries to kill herself; she wants to set her young husband free to live a life without an invalid wife.

Captain Kelley saves a man from being killed by muggers while docked in New York. He was once a famed surgeon turned into a drunk; he is signed on as ship doctor. He tends and studies Kathleen. Months later as a skilled surgeon again he operates on Kathleen’s ailments.

The good doctor is so pleased and once more acclaimed. He makes the down payment on a small freighter for the man that saved his life, and the little lady that gave him back his confidence.

The good doctor waved good bye as the small freighter weighed anchor. Kathleen was tucked under her Captain’s arm as the ship turned into the sinking sun.

I was born near a lighthouse far out at sea on January 20, 1913. I must have heard the ocean roar and heard it pounding on the shore.

Eight summer’s came and with it a big three-mast schooner. Prohibition was the name of the game. I was at the tiller, far at sea and my father was out from sampling the tea; I was the youngest rum runner of them all.

I needed all that I could earn to support a pretty nineteen year old wife and home; 10-27-1931 we married and bought property in Milbridge, Maine. Vera Alley Kelley and I were married for 65 memorable years.

I was a rigger at the Boston Navy Yard during the attack on Pearl Harbor, 12-7-1941; I also worked on “OLD IRONSIDES”.

South Portland’s West yard in Maine, where I worked as a “pusher rigger”, I helped build and steered Liberty Ships for Captain Litchfield at all of the harbor trial test runs.

I moved to North Carolina to enjoy my boat and the weather, I developed a small marine railway yard in Harkers Island near the Outer Banks. There in 1969 I got a call; The “BIG BAD JOHN” had run aground. I was recommended to Jimmy Dean as the right licensed captain to pilot her to Florida.

Later I was hired to Captain the “M.V. MOUNT HOPE” for cruises from Rhode Island to Canada.

The forty five foot ketch the “FROLIC”, I bought for my own. The “FROLIC” was berthed at Morehead City close to my home.

The last 25 years I have written of experiences of my wonderful lifetime. I am now 98 years old and still going strong; I now reside on the Crystal Coast of North Carolina with my family of five generations.