More of the Same

Further poems and thoughts on the Christian faith & life in general 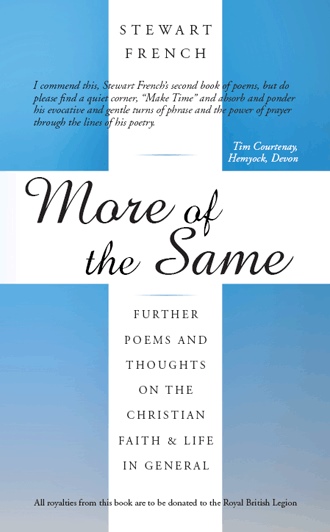 GOD IS CALLING YOU In April 2003 Gwen and I went to Kosova for just under a week with SMILE International, to whom this is dedicated Permission is also given to Jan and Steve Worthy to use these lyrics at any time. What we saw had a great impact on me. Nothing could have prepared me for what I heard from those who survived the suffering. The answer to the world’s needs lies with those who are prepared to get out of the boat, and leave their comfort zone. God is calling you to serve Him, He is calling you by name, And once you leave your comfort zone, you will never be the same. Once you put Him to the test, and let Him have His way with you Stand back and watch the Father work. Look and see what God can do. You cannot work in your own strength, nor succeed in your own way; But step aside and trust in Him, let Him lead you day by day. Let His Spirit flow within you, let Him show you what is planned. Let Him open doors before you, then just obey the Lord’s command. You may be called to serve your Lord by opening your door To house the lonely and the sad, the widow and the poor. To show the love of Christ to those who need to share their fears: To let them open up their hearts, so God can heal them through their tears. You may be called to intercede, to call on the Lord for those In situations you can’t see, but are which the Father knows. A prayer of faith from faithful folk can change things far away. The Father listens to his own, so make the time to pray. You may be called to foreign lands, to places laid to waste: With menfolk killed, and women raped, and whole villages displaced. The hatred sown by years of war, for religion or for land, Cannot be healed by man alone, but by God’s almighty hand. If you are called to war–torn lands, are you emotionally prepared To sit beside the orphan, and the angry, and the scared? Despite the reconstruction there is nothing can disguise The widows’ haunted faces, or the children’s pleading eyes. So let the Saviour lead you by the Spirit birthed within. Each journey starts with just one step – let your journey now begin. Step out in faith and hold God’s hand, the Father’s calling you: So follow in his footsteps, and be amazed at what He’ll do. SOME MOTHER’S SON In 2009 Gwen and I joined with members of the University of Bath Staff Association in visiting the battlefields of the Somme and Paschendale from World War1, under the inspired, and inspiring, leadership of Colonel Tim Courtenay. Like so many before me, I was struck by the futility of it all, and by the loss of so many men who were each “Some Mother’s Son” White tombstones by the thousand from every race on earth, And every one is for a son some Mother brought to birth. Beneath the Cross of Sacrifice and the Great Crusader’s Sword Some stones have names engraved thereon, their memory secured. But other graves hold unknown bones, “A Soldier known to God”; You lie in serried ranks in death as you rest beneath the sod. You did not start this dreadful war, but you chose to face the gun. We may not know your name, my friend, but you were some Mother’s son. * NB The rights for this poem are given to the Royal British Legion in perpetuity. 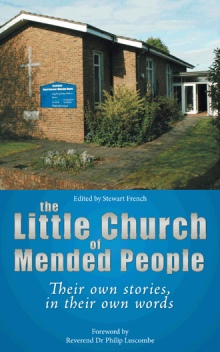 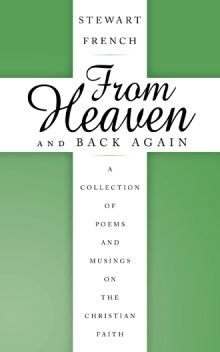 From Heaven and Back Again
Stewart French
$13.32

This is the second volume of Stewart’s poetry, a worthy successor to “From Heaven and Back Again”. The poems are again a flavourful mix of the deep, of the spiritual, of the funny and downright amusing and the ones that cry out with anger, pain or frustration. What gives them life is that they mean something profound to all of us, read them and you will feel a resonance and a connection. Modern living can be tough, we can lose our sense of time and perspective; or else we can forget that our God is so big, so high and so mighty. These poems are easy to read, on occasion they show Stewart's emotions laid bare but, my, what love for his fellow man is revealed and what joy in knowing Jesus as real in his and his family’s life. The poem “Living in the fast lane” is a picture of the times and pace we seem to live in yet we are bidden to remember that indeed Jesus is Lord. This is good stuff and reveals the man and his family, his life and his daily walk with God – not through rose tinted spectacles but with honesty that we can truly identify with. Just dip in and enjoy, read about and experience a normal life living with God – like you and me? Nicholas Beach April 2011

Stewart French has been on life’s front line for many years. From his days in Wiltshire, experiencing the sudden shock of redundancy with a new family to support, the consequential emotional and financial shock waves and then after many uneasy months to an uprooting to Kent with the family to a new job and new life. It was not easy and there were hardships, crises even, a spiritual desert unfolded for a time but through it all Stewart was honest, seeking and faithful. He is a man who has spiritual antennae and yet who is utterly himself. Indeed he is someone who lives next door to you but who has been given a gift for writing and putting into words that which touches and seeks the inner person with all of its emotions and senses. His Christianity is part of his DNA, not obvious or loud, but there in his life and work and play. Stewart has been married to Gwen for almost forty years, and is a father of three, and grandfather to a growing number of children. Together they worship in a small, but very loving, Methodist/URC Fellowship in Ashford, Kent in the UK. He has been involved in the wider Christian Church through the Full Gospel Fellowship (for which he was Chapter President for some 7 years), Churches Together in Ashford (where he served as Chairman) and various other ecumenical means.