The Only Boy Who Danced

A Journey from Oklahoma to Broadway and Beyond 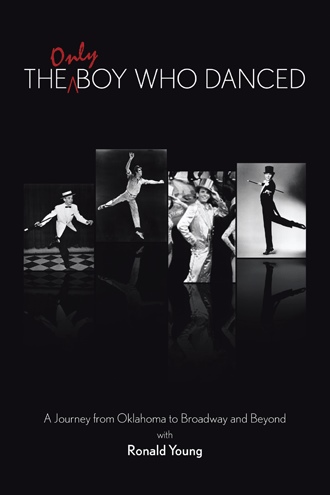 Here I sit on the deck of my home on the shores of Grand Lake O’ the Cherokees on Monkey Island, Oklahoma, having a cup of coffee while the birds serenade me... . How did I get here?

My journey has been interesting and amazing, with unexpected turns, painful disappointments and a bag full of surprises. The telling of my story up to and arriving at this point in my life is simply that ... a narrative of my life’s journey. This is not a “how to” book! That would be presumptive of me. My book will have served its purpose if any of my decisions inspire you or lead you to a new way of thinking about your life and pathways.

My choices have always been a combination of following my passions and being practical. This made for a balance of treating myself well as well as planning for the future. It hasn’t always gone smoothly. There have been times when my direction was unclear, and other times when the unexpected took me in an entirely different and unplanned direction.

Growing up in Grove, Oklahoma, a small rural farm community much like the Texas town in Peter Bogdonovitch’s “Last Picture Show,” did not give me an inkling of where my life would go, but it certainly was an adventure. After attending the University of Tulsa and receiving three degrees in music, Broadway and New York City beckoned. This led to a thirty-three year career in musical theatre. At a crossroads, Career Transition For Dancers helped me find work in the Marketing Communications department of a large financial institution, Merrill Lynch, for almost twelve years. Along the way I discovered the world of Professional Organizing, and currently go around the country helping people get control of the clutter in their homes and offices.

Why write a book? My friend, Naomi Buck, suggested that I give a seminar entitled “How to Retire with Your Ducks in a Row.” She said she had been telling her friends in Naples, Florida, about how a friend of hers in New York had retired in pretty good shape from his beginnings as a tap dancer.

When I mentioned this to Julie Morgenstern, my Professional Organizing guru, she said, “No, not a seminar ... you have to write a book!”

I replied, “Julie, it’s just my story, no one else would do it that way.”

She responded, “I don’t care, it is an inspiration. I don’t know of anyone who has managed to do what you have done with your life.” Thus began my fourth career.

After writing the first chapter, I asked some friends for feedback. Two very good writers, Paul Critchlow and Michael Lirtzman, picked up on the same line, “It was difficult being the only boy who danced in a small town in Oklahoma,” and thought that “The Only Boy Who Danced” would be a strong motivational title.

Sounded good to me.

Fresh from the obscurity of living in the small farming community of Grove, Oklahoma, Ronald Young, at 22, is catapulted onto New York City’s “Great White Way”… BROADWAY.

After arriving in Manhattan on a Friday, he auditions for his first Broadway show on Monday. Bingo! After three call back auditions he snags his first dancing role in the soon to be mega hit “HELLO, DOLLY!” directed and choreographed by Gower Champion and starring Carol Channing.

Armed with three music degrees and lots of enthusiasm he embarks on his career on Broadway. His resumé includes working with some of the legends of the theater: Ethel Merman, Shirley Booth, Angela Lansbury, Tommy Tune, Bernadette Peters, Joel Gray, Chita Rivera, Sandy Duncan, Georgia Engel and many others. He appeared in a host of shows: “MAME,” “GEORGE M!” “THE BOY FRIEND,” “MY ONE AND ONLY,” “A CHORUS LINE” and the films “HAIR” and “ANNIE.”

“THE ONLY BOY WHO DANCED” is a series of compelling, riveting stories about Ronald Young’s personal quest to make it on Broadway. If you or a friend have hidden aspirations to make it on the New York theatrical scene, you will enjoy his tips and suggestions on how to break through this tough barrier.

Ronald Young lived his dream. From the small rural community of Grove, Oklahoma, he made it to Broadway and fulfilled a 33-year career in theater. Transitioning to the corporate world he found his niche as the archivist of Merrill Lynch, Inc. He has also launched Order Out of Chaos, a professional organizing business.

THE ONLY BOY WHO DANCED is a motivational theater-based book with applications for anyone thinking about a show business career or making a career transition.