by Errol A. Gibbs & Philip A. Grey 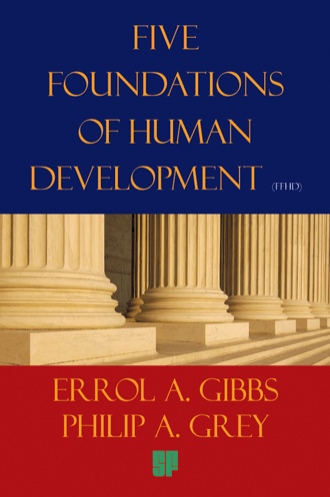 Excerpt taken from: Five Foundations of Human Development (FFHD) “A Proposal for Our Survival in the Twenty−first century and the New Millennium” Foundation 2 Moral Foundation 2.1. Leadership (Guidance) Leadership, Culture, and Religion Modern civilizations are at the same major crossroads of culture and religion that have challenged leadership in the past. This is our defining moment of the twenty−first century. The new dynamics of the modern world demand new ways of looking at civilization, not just through economic prisms, but through religious, moral, social, and cultural prisms of the twenty−first century. Leadership styles of the past do not hold out hope for our survival in this new period of world history. We are making new history, ushering in new and emerging challenges to leadership. Therefore, a new standard of leadership and authority has become a global necessity to ensure the co−existence of nations with some semblance of mutual hope for survival in the new reality. This new style of leadership and authority must extend beyond our national borders. It calls for the application of the core principles of religion, such as love, joy, peace, patience, kindness, goodness, faithfulness, gentleness, self−control, and God’s uncompromising love for humanity. Religious leaders speak of a universal God and of the unity of the human family. These religious principles are fundamental to universal leadership. Is God universal to religions? If He is universal to all religions, His ardent followers in all religions should have a universal message of goodwill that transcends all human differences. Evidence of divisions among religion and among religious denominations demonstrates that world religions do not share the same concept of God, or religious tenets, which is a challenge to religious leadership in the world. It is only when we grasp a common concept of God as God of the universe that leaders of nations will inadvertently grasp the concept of the oneness of humanity, which alone can unite us. Leaders of the past have failed to grasp this concept as their first responsibility of leadership; hence, the legacy of failure. Leaders in our modern era have reinforced the structures that their predecessors established in the past to divide, conquer, and control human beings and nations. Even with our modern era of leadership councils, and leadership training and development, a great leadership deficiency seems to exist in every sphere of human activity. Notwithstanding, with a new paragon of leadership, nations can effectively manage the challenges faced today and new and emerging challenges of the future such as the fifteen leadership challenges listed below. —Fifteen Leadership Challenges that call for a new Paragon of Leadership: 1. Humanly caused and humanly inspired disasters 2. Illicit and legal drug abuse and rehabilitation 3. Militarism and political instability 4. Legal restraints versus moral restraints 5. Global healthcare threats and pandemics 6. Rehabilitation versus incarceration 7. Global terrorism, wars, and genocide 8. National unemployment 9. Global poverty and hunger 10. Bourgeoning national debt 11. Cyclic economic collapse 12. Competition for scarce natural resources 13. World political and economic instability 14. Population explosion and illegal immigration 15. Global immigration and religious and cultural wars These fifteen leadership challenges are a mere sampling of the twenty–first century challenges to leaders. Religious leadership plays a primary role in the life of individuals, families, and nations. Our churches, chapels, cathedrals, monasteries, synagogues, temples, and mosques are a bastion of leadership. However, when we move to the public stage, observable practice of religion is not clearly as evident in our day–to–day struggles for material success and material survival. Our leadership style changes and even the lessons we learn take on a different meaning. One would naturally assume that our universal God would have a universal influence on all of humanity, and would be present in all of our institutions, but the paradox of religion is its history of exclusivity. Some would argue that religion does not have a place in our public schools, universities, corporations, and other institutions, yet we acknowledge that our universal God is omnipotent, omnipresent, and omniscient. Are we merely contradicting our faith, belief, and practice in these important areas of human interaction? It seems as though the universality of our God, or god(s), and our all–encompassing love for humanity, diminish within the most important of our national and international institutions. The economics of survival take precedence over lessons of leadership. Following are ten important institutions in which human leadership and God’s universality ought to be figured prominently: —Ten Institutions in which Leadership Must be Figured Prominently: 1. Homes 2. Public schools 3. Religious institutions 4. Governmental institutions 5. Non–governmental organizations 6. Private and public corporations 7. Colleges and universities 8. Industrial complexes 9. Military installations 10. Athletic playing fields The need for a universal God in every human endeavor is paramount. This universality is essential to ensure that we practice the core principles of leadership and behaviors we display and teach in our religious institutions. These practices should underlie our relations in the ten marketplaces depicted above, as well as in other institutions. If we fail to practice principles of our religions in the global marketplace, then we are destined to take the path that leads to indifference toward others in the most important arenas of human relations. If we do not practice, daily and consistently, the core principles of our religions, in every institution and organization, can our religions have any meaningful effect? There is a need to shift to a new standard of leadership that incorporates our religious virtues in all facets of human endeavor, in all of its universality. To do otherwise is to acknowledge that there are inherent limits and boundaries to God’s universality, and to His influence and authority. Ought we then to make explicit in our prayers to God, the limits and boundaries that we have set before Him? Can we limit God? 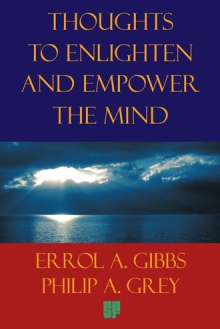 Thoughts to Enlighten and Empower the Mind
Errol A. Gibbs & Philip A. Grey
$16.95

Five Foundations of Human Development (FFHD) is a philosophical, religious, and practical discourse on human development based on the following five foundations: Spiritual, Moral, Social, Intellectual, and Physical. The authors proffer that human beings possess the capacity to rise to a higher state of civilization when we allow ‘Spiritual Intelligence’ to underpin ‘human intelligence’ as our capable guide. The indomitable spirit within human beings that brought civilization out of the Dark Ages and into an Age of Enlightenment demonstrates our capacity to transcend moral hope and optimism for a better world with peaceful coexistence among individuals, families, and nations. This book will help inform, enlighten, and empower individuals and leaders in such fields as engineering, science, religion, politics, the military, and other great institutions to engender solutions to the myriad of unsolved problems of past centuries, problems of the present, and emerging problems of the future. Problems, such as wars, genocide, greed, and the exploitation of human beings begin within our destructive spiritual nature and manifest in the physical nature. Therefore, solutions also lie in the spiritual realm as a counterbalance to the natural realm of human existence. FFHD is a blueprint for human survival based on adherence to physical laws and spiritual laws that transcend a belief in an omnipotent (all powerful), omnipresent (everywhere) and omniscient (all knowing) being. It will awaken the conscience to comprehend the life–threatening issues that face humankind. The solutions, therefore, cannot merely be left only to the educated elite, the military forces, and those in high public and private office. The global significance of this book is that it informs a more communal view of our world. It is the only perspective that will allow us to enter the global village prepared for the racial, social, cultural, environmental, and economic challenges that lie ahead.

Errol Gibbs and Philip Grey bring a unique collaboration to their seminal work, Five Foundations of Human Development (FFHD). Combined, they have travel experience in thirty–two countries, including, Belgium, Cameroon, China, Ghana, India, Indonesia, Japan, Mexico, and Singapore. Their experiential background has fostered a unique understanding of the challenges that face humanity in the modern age. Their aggregate knowledge can lead to the betterment of humanity. Errol is a devout Christian who made an irreversible commitment to the faith through baptism in May, 1983. In 2003, he made a life–changing decision to relinquish a career in Engineering (Project Management), to commit to search for answers to problems that afflict humanity. Five years of research in the Holy Bible, not as an academic study, but for its basic spiritual truths, underpins his new and inspiring perspectives. His scientific background informs the need for congruity between the spiritual and the natural world we struggle to comprehend. Errol immigrated to Canada from Trinidad in his mid–twenties. He lived in the United States for five years and currently resides in Milton, Ontario, Canada. Philip is an international evangelist, author, and motivational speaker. He was born in the United Kingdom, where he lived until his mid–twenties. Philip also lived in Liberia, West Africa for three years, and in the United States of America for nine years. He currently resides in Toronto, Ontario, Canada. Philip has an extensive background in international ministerial research and practice. He has held positions from youth pastor to National World Missions director with the Church of God. Philip has also served on an International Leadership Advance Conference Committee; a regional council for Ontario Churches, the Ontario Ministerial Development and Credentialing Board, and was a member of the Board of Directors for the International Bible College, Moose Jaw, Saskatchewan, Canada.