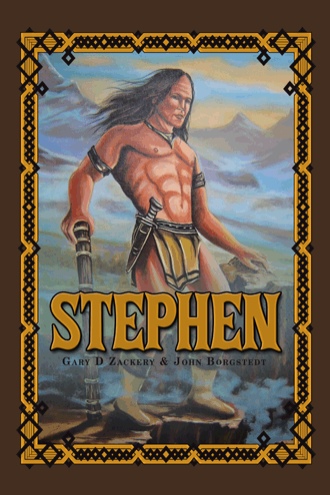 Dawn brought the promise of a beautiful day as the birds replaced the night noises with their voices of praise in agreement with the first streaks of color washing the Wilderness of Cann. There was a rugged handsomeness in the mountain glades and valleys, and in the lands that spread distant as the winds. The lands stretched for miles, and few men there were who would not rightly call it a wilderness, yet it was not barren. There was a popular belief that it was called a wilderness, not because of what it was, but because of what it was not. It had been told in the stories of old that there were those who had known more promising lands, hence the calling of this land a wilderness. Rugged it was, and rugged were those who populated it. This is their story, as it has been passed down by the telling through the ages by the descendants of those tribes. The Wilderness of Cann had a long history of turmoil and trouble. The land was inhabited by wandering tribes who tried endlessly to find a place of rest for their people, that is with the exception of the Giant Horsemen. The Giant Horsemen freely roamed over the vast expanse of the wilderness, bringing destruction and pain wherever their path led them. There was nothing holy to the Horsemen. They were a huge race, known for their cruelty and complete lack of conscience. Their chief weapons were fear, intimidation and their loud clamoring cries in the heat of battle. They traveled in packs and always sought out weak and helpless prey.

The perfect age group for this Young Readers Novel is 10-17, but it is acceptable for adults as well. THE HEART OF THE PEOPLE In the deep woods, there dwelt a small band of nomads known as the Peacemakers. They were a quiet people who trusted in the goodness of the Father of Spirits and lived from the fruit of the ground. Because they lived in such close communion with the land, the Peacemakers were a humble people, holding gentleness in high esteem. They were a people made up of many tribes of the old country that had been brought together by the Great Hand of Mercy. In the early days, there were many peoples scattered over the old lands of Ability. Ability lay east of the Triall and was an ever-present reminder to the Peacemakers of the land they were now exiled from. The river was, for the most part, feared by many who wandered in the wilderness; for, it was the great river that had separated them from their homeland. The river was believed to be the curse that kept them estranged from their heritage, thereby keeping them besieged by the evil ways of the Horsemen. Yet, it was this same river which forced them to seek every means possible to live peaceably together. Hence, their namesake. Stephen is a fictional story about a Nomadic Tribe. Based on biblical principals, 'Stephen' teaches life lessons to yearning hearts. Gary Zackery, who authored the book, is pleased to welcome John Borgstedt as co-author. John is the author of 'I Love You Mom, Please Don't Break My Heart.'

About the book 'Stephen' Gary says, "I had written a few short stories before this work that allowed me to touch the lives of a few specific young people in need. ‘Stephen’ came about as a ministry effort to reach a troubled pre-teen during his time of crisis. Stephen was the son of a dear friend and needed special intervention at that time in his life. I felt that if I could reach him through a short story, it just might be the thing to bring him through his crisis. Well, I will just have to say that short stories do not always remain short. This one became a small book… I hope that of all the people that are blessed by this work, somewhere along the way there are a few Stephens that get to read it too, and that they are helped through their crisis as a result. In the end, it is my prayer that this book will bring glory to the Lord Jesus Christ. Happy Reading!" Gary Zackery spends most of his days looking for an extra hour he can manipulate into another project or errand! His days are filled with work and play and a day ends when there is no more energy or resources to pull from. Gary rides a Harley and frequently takes it to the prisons where he and his wife, Diann, minister. They have recently relocated to Houston County Texas where they own and operate an Ecoganic farm. They raise dairy cattle, dairy goats, and happy chickens! The animals all live together and get along, including numerous dogs and cats... Farm life is the good life! Gary and Diann are Christians first, and they are entrepreneurs. Diann owns and operates a supply business. Gary operates a construction business specializing in remodeling and property maintenance; and he is also a Faith Based Anger Management Specialist. They are intrinsically immersed in House Church. They ride motorcycles together with the Christians they meet with in home meetings as well as with the Christian Motorcyclists Association (CMA). They are both involved regularly in prison ministry. They’re hobbies include hobby/crafts, drag racing, and fishing. You can learn more about Gary’s writing activities by visiting him on the web at http://gary-d-zackery.com. You may contact him by email at Gary@StartRight.us or by phone: (936) 582-0655.