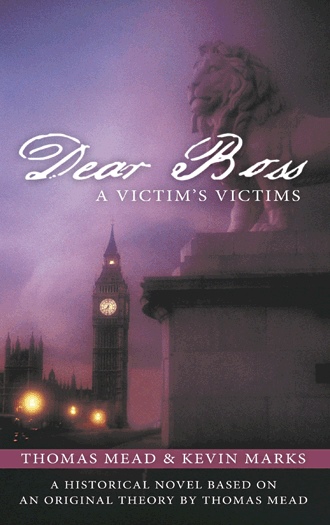 The silver-haired gentleman stroked his waxed mustache as he read from a file, which lay open on his massive desk. 'We always get our man,' he snorted with disgust. Sir Reginald O'Connery, Chief Inspector of Scotland Yard, was sifting through a stack of unresolved case files. He had built three piles on his desk. One for cases he wanted kept open, one for cases he wanted tabled for now, and another more distressing pile for cases to be closed. It rankled him to stamp these with the word Unsolved on the cover.

His secretary, Alfred Grimes, rapped on the frame of the open door of polished oak. 'Harold Whiting to see you, sir,' he declared.

'Send him in, Alfred. And please be so kind as to shut the door behind you.'

Sir Reginald looked up to see his stocky chief investigator close the door after him. Where Sir Reginald used his height and regal bearing to intimidate suspects, Detective Whiting used his broad shoulders and beefy hands to pressure them. He was a brusque sort of man. His idea of tact was to say a sarcastic 'sir' after insulting you. Sir Reginald thought he was perfect for his job.

'Here's the file you asked me for, Chief,' Whiting began, 'an extraordinary fellow, this Treves. Our problem wasn't finding background information on him. It was sifting through all of the articles to boil them down into a short profile.'

'Precisely why I had you make the report,' O'Connery stated, chewing on his ever-present pipe. 'I like to get the measure of a man before I meet him for the first time.'

'I take it this has something to do with your dinner engagement this evening?' Whiting asked.

'Quite right, Harold,' Sir Reginald chuckled. 'I can't put one over on you, can I? The good doctor is to be my counterpoint at this evening's affair. Unless I miss my guess, he should be able to shed some new light in this 'pathology of crime' issue. I requested the report for no other reason than I hate to be caught unawares.'

'The report may not be enough to save you there, sir. Treves has an extraordinary mind and is up to date on many issues. You may get a leg up on him, sir, by showing that you know of his involvement in the temperance movement.'

'Not a drop, sir. In fact, he is rather long-winded on the ravages of drink on the body.'

Sir Reginald sat back in his chair. 'I suppose he would be something of an expert on that subject. That hospital of his being located in Whitechapel and all. Very good, Whiting, that's exactly what I'm looking for.'

'I hear that you're to be the guest of honor this evening, sir.'

'Oh yes, that Lady Maturin is a truly remarkable woman. I had only just arrived back from the Conference on Crime in Edinburgh a matter of days, when out of the blue the Lady informed me that she had heard of my interest in criminal pathology. She went on to let me know that the subject intrigued her. How do you think she got wind of it so quickly?'

'I really don't know,' said Whiting, shaking his head. 'It does make one stop to think. Still, she is rather well known for her connections.'

'I can only hope that we develop sources as reliable as she has,' the Chief snickered. 'Anyway, thank you for your usual promptness. It should save me from any embarrassment this evening.'

Taking his cue to leave, Whiting asked, 'Will that be all, sir?'

Whiting looked over his shoulder as he went through the door. The Chief Inspector was already poring over his report. His knitted brows showed his intense interest. This time he's met his match, Whiting thought with a smile. I'd give anything to be there tonight. He nodded to Grimes as he left the office. Anything!

'Go down to archives and pull anything you can find on this 'Elephant Man' character. He may be the key to our good doctor Treves.'

'Right away, sir,' said grimes, as he turned to go.

Sir Reginald fingered the next file and reset the pipe between his teeth. 'I wonder if Treves could help us on this one?' He mused. After all, it was his territory. The investigation was at a dead-end. What did he have to lose? Still, Sir Frederick Treves was no idiot, and would have to be approached delicately. It was the kind of challenge that the Chief Inspector relished. There was nothing like a rousing battle of wits to add excitement to life.

O'Connery opened the file and read the heading. 'Jack the Ripper' it started. The name had become infamous from all of the news coverage and the hideousness of his crimes. Worst of all, the Ripper had eluded his best efforts to capture him. It rankled him that such a monster had continually gotten away..

TRYING TO PROVE that a historical figure was not Jack
The Ripper was the beginning of 15 years of research. At each
turn, whether it be motive, opportunity, psychological profile,
etc., I could not remove “him” from suspicion. What I found
only kept pointing more and more toward “he could have
done it”. It was painful not be able to cross “him” off my list.
As we have learned mass-murderers come in various shapes
and sizes. Theodore Robert Bundy by all appearances was a
well groomed, well-mannered model of young manhood and
yet underneath that facade lurked the cold heart of a killing
machine. My “suspect” does not fit that mold on the outside
but was thought to possess a spiritual soul and kind heart.
Could he have also hidden a dark side? A dark and hideous
side that could also patiently wait? Wait to grow strong and
lash out at the progenitors of his deep and repressed hatred?
Who of us can be sure we can spot a true monster?

Tom Mead and Kevin Marks met in High School and became fast freinds that drifted over the yeras. After their 20 year reunion Tom approached Kevin with the results of some 15 years of research into the "Ripper" murders. Kevin was sceptical but was swayed by the totality of information Mead had collected that kept pointing to one person. We realize you the reader may be sceptical also but hope you can keep an open mind or do as we did. Try to PROVE "he" couldn't have done it.